Looking back on MinxEats over the past year, it seems I did a lot of cooking, but that's not necessarily so - Mr Minx is still the primary chef in our house. What happened is that I bought some nice white plates and started to take more interest in how the food looked as much as how it tasted. I took more photos of the results and blogged about it.

That said, I think we ate better at home than in restaurants in 2009. Christmas dinner, for example. 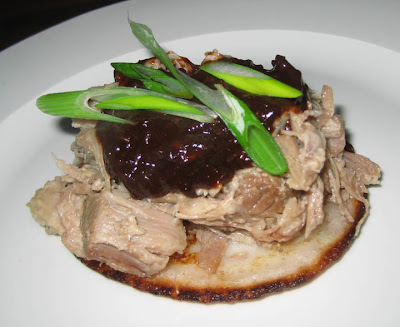 The Black BBQ sauce from the penultimate issue of Gourmet was unbelievably good, and a recipe I will definitely consult in the future.

My sweet potato-and-bacon concoction for Thanksgiving might become a holiday tradition.

The tapas feast we prepared for my brother's birthday had some particularly tasty treats, especially the empanadas and the romesco sauce.

Mr Minx's linguini and white clam sauce is always delicious, as is his spaghetti and meatballs. Most of my attempts at ricotta gnocchi were damn fine as well. 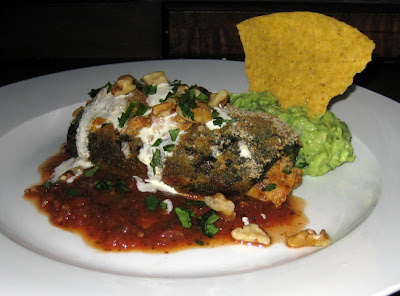 Another dish of which I tried multiple successful variations was chiles rellenos. (The most recent version used Christmas leftovers - a stuffing of duck, duck guts, rice, leeks and wild mushrooms, and a drizzle of the lemon mayo from the sweetbreads, gussied up with a bit of cumin.)

A dish based on a challenge basket on Chopped yielded this shrimp, apple, and peanut butter combo. The flavors go remarkably well together.

And my first experience with cooking parsnips, in this variation on Top Cheftestant Stefan Richter's chicken pot pie, has made me a fan for life. Of parsnips, that is.

Here's hoping that 2010 brings many more occasions of deliciousness from the Minx kitchen!
Posted by theminx