I thought I'd continue tying Top Chef into most of my posts here at MinxEats by cooking one of the recipes from this season. Stefan has won most consistently, so I figured I couldn't go wrong with one of his. I didn't want to make anything too complicated, so I decided on his chicken pot pie recipe from the amfAR Christmas party episode.

A couple of weeks ago, Mr Minx and I discussed having waffles for dinner, and that stuck in my head. So instead of waiting for puff pastry to thaw, I whipped up some savory waffles instead. 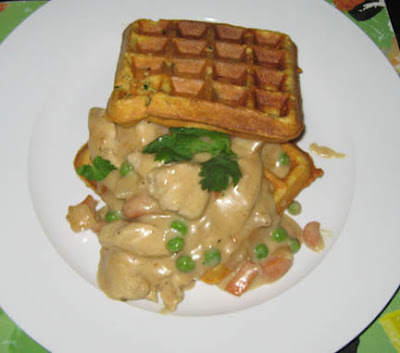 No real way to make this look appetizing. Sorry.
The recipe on the Bravo site is pretty weird. It calls for a pound of eggs (?!) and far too much butter and flour for the white sauce.  And it called for celery.  Like chef Jamie Lauren, I'm not big on celery (I know it's essential in mirepoix and trinity, but I don't want to taste it).  So I altered the recipe to make it work for me.  Sorry, Stef. ;)
Creamed Chicken
1 lb boneless skinless chicken breast, cubed
2 T vegetable oil
2 cups chicken stock
1 small sprig rosemary
pinch of sage
pinch of thyme
1 bay leaf
3/4  cup of light cream
1/2 large onion, chopped
1/2 cup carrots, diced
1/2 cup frozen peas
1 cup parsnip, diced
2 T butter
2 T flour
salt and pepper
Heat veg oil in large skillet. Saute chicken pieces until lightly browned on all sides and remove from pan.  Add veg to pan and cook on low heat for about 10 minutes.  Add chicken stock and herbs and simmer until veg are soft.  Strain off liquid and reserve.
In another pan, melt butter.  Stir in flour and add the reserved chicken stock, whisking well. Simmer this mixture until it's thickened.  Add cream.  Salt and pepper to taste.  Add chicken and veg back to sauce and cook for an additional 10 minutes until chicken is cooked through.
Yield: a lot. A quart and a half or so.
Cornmeal Waffles
1 cup yellow cornmeal
1 cup all-purpose flour

1 T baking powder
1/2 t baking soda
1 t salt
2 large eggs, lightly beaten
4 T butter, melted and cooled
1 cup milk, more or less as needed
3 scallions, both green and white parts, chopped
1 large jalapeno pepper, seeds and ribs removed, minced
In a large bowl, combine the cornmeal, flour, sugar, baking powder, baking soda and salt until well blended. Add the eggs and butter. Gradually add the milk, mixing well until a thick batter is formed.  Stir in the scallions and jalapeno.  Cook the waffles as specified by the manufacturer of your waffle iron.  Keep warm in a 300° F oven until all waffles are cooked.
Makes 10-12 depending on the size of your iron
Serve creamed chicken over waffles.
It turned out really well - the chicken was tender and I liked the addition of parsnips (which I've never cooked with before).  As I was eating, I was thinking that a creamed seafood sauce would be even better over the waffles - something decadent with lobster, perhaps.  I'm definitely going to try something like that in the future.
Posted by theminx

Came looking for your Stefan interview - not here yet. So I decided to bop around to a post I hadn't seen.

You'll love this - next time you roast some vegetables be sure to include some parsnips - they're (channelling RRay) delish roasted!