MinxEats is having a Top Chef contest! The prize, to three lucky winners: a 2009 Top Chef calendar! 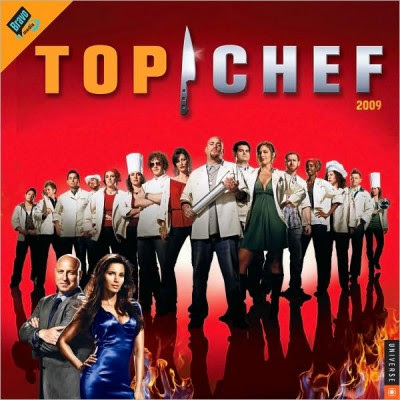 So how do you win? All you need to do is answer these twelve trivia questions correctly.

Send your answers to me at theminx1@gmail.com with the subject "Trivia Contest" by Monday, March 2. I'll notify the winners by e-mail, then will post their names - and the answers - here on Wednesday the 4th.

1. Which Top Cheftestant (that we knew of) has only one testicle?

2. Who was the original host of Top Chef?

3. Season 4's Ryan Scott had trouble preparing a classical chicken dish. What was it?

4. Whose winning dish is featured on the menu at T.G.I Fridays?

5. In how many episodes did Anthony Bourdain appear?

6. Which famous musical performer's sibling appeared on Top Chef? (Name both the performer and the sibling.)

7. Why was Andrea Beaman brought back to compete in season one?

8. Who were the fan favorites from the seasons prior to season five?

9. Which chef was eliminated for cheating?

10. Whose hometown is Niceville, Florida?

11. Who is the champion nutcracker of Top Chef?

12. Name the locales for the finales of each season.