Once again, Mr Minx and I decided to avoid the crowds dining out on Valentines Day and cooked dinner at home. Earlier in the week I had received an e-mail from a cookware supply site that touted fondue pots and remembered that we had one at home that we had never used. I forwarded the e-mail to my hubby, "How about cheese fondue for Valentine's day?" Sounded good to him. And for dessert, he wanted something tart-like, in a crust. "We have lots of apples in the crisper," he added, to entice me. I had been wanting to try making tarte tatin for a while, and this seemed like the perfect opportunity.

First, the fondue. Rather than buying a whole bottle of kirsch just to use a couple of spoonsful in the traditional cheese fondue recipe, we used beer instead - about half a cup of Leinenkugel Fireside Nut Brown. The beer was brought to a boil and then several handsful of a combo of grated Emmental and Jarlsberg cheese was added (about 2/3 lb) which had first been tossed with about a tablespoon of cornstarch. The fondue pot we received several years back went unused - it needed fuel which we did not have and did not care to purchase at the moment. I did, however, have a mini crockpot, which worked just fine to keep the cheesy goodness warm. 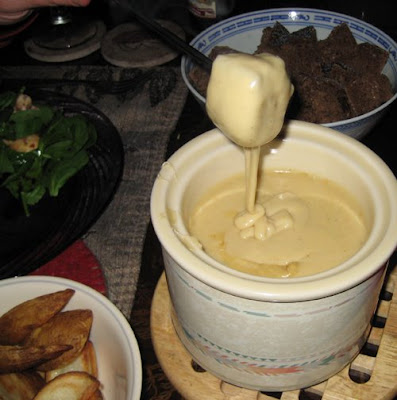 For dippers, we used chunks of pumpernickel bread, baked potato wedges, chunks of salami, and poached shrimp. Spinach salad and cornichons added a nice bit of vinegary bite to balance the rich cheesiness.

As for dessert...the tart came out very well, except it was a bit juicy. I don't have a large cast iron skillet, so used our trusty oven-safe 9" non-stick. Because it's smaller, I used only 5 apples and most likely did not cut back enough on the amount of sugar. I probably could have crammed another apple in the pan though, since they shrunk quite a bit after they spent some time in the oven. Next time.... Tasted great though! And apart from peeling and quartering the apples, not really any effort at all.

Tarte Tatin (from Epicurious.com, with my parenthetical comments)

Roll pastry sheet into a 10 1/2-inch square on a floured work surface with a floured rolling pin. Brush off excess flour and cut out a 10-inch round with a sharp knife, using a plate as a guide. Transfer round to a baking sheet and chill. (I just used the whole sheet of pastry, uncut, tucking in the corners. It was perfect.)

Spread butter thickly on bottom and side of skillet and pour sugar evenly over bottom. Arrange as many apples as will fit vertically on sugar, packing them tightly in concentric circles. Apples will stick up above rim of skillet.

Put skillet in middle of oven over a piece of foil to catch any drips. Bake 20 minutes (apples will settle slightly), then remove from oven and lay pastry round over apples.

Bake tart until pastry is browned, 20 to 25 minutes. Transfer skillet to a rack and cool at least 10 minutes.

Just before serving, invert a platter with lip over skillet and, using potholders to hold skillet and plate tightly together, invert tart onto platter. Replace any apples that stick to skillet. (Don't worry if there are black spots; they won't affect the flavor of the tart.) Brush any excess caramel from skillet over apples. Serve immediately.
Posted by theminx

With a little bit of melted cheddar for a bite :) I (weirdly) love melted cheese on my apple tarte tatins.

I'm going to have to try the tarte tatin one of these days!