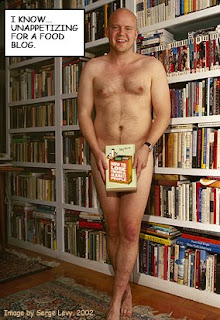 There's an interesting live chat with TC judge Toby Young over on the LA Times site. Here are a couple of excerpts that help explain the way the show is judged and why nobody's favorite - Hosea - won over Stefan.

"A lot of people ask why we don't judge the contestants according to how they've done over the course of the entire season and the reason, I think, is because it would be obvious, from a very early stage, who the winner is going to be. In the current season, for instance, Stefan would have emerged as the strongest contestant very early on and, if we'd have been judging it that way, he would have won. That might be a fairer way of assessing the chefs overall, but it would make for boring TV. Judging people entirely on how they perform on the day means there's always a chance one of the stronger contestants could go out and one of the weaker ones pull through. For those who follow sports, it's a problem the organizers of the Grand Prix have encountered. The final is often very boring because by then everyone knows who's one. Case in point: Lewis Hamilton won this year in spite of not coming first in the final."

"A lot of people have accused the judges of keeping Leah in the show in order to keep the romantic subplot alive, but the producers are very scrupulous about not trying to influence the judges' decisions one way or the other. Leah was definitely one of the weaker contestants, but they don't always get eliminated early because of the way the show is designed. Ambitious chefs who over-reach are the ones that get punished in the early rounds; unambitious chefs who stick to what they know tend to survive."
Posted by theminx

Somone in a different forum said that they should start doing blind tastings every week, that way they won't know which chef cooked what and they'll just base their decision on what dish they liked.

May help, but I think eventually they are going to know who's dish is who's without knowing based on style, etc. Just like the first challenge with Toby as judge. Plus, they wouldn't be able to defend their dishes at JT. I'd like them to keep the "best dish today" for the regular season, and yes, good chefs will go home. But then drop that and let them factor in the whole regular season for the finale judging.

You are INCORRECT for putting that photo on your blog without warning us! Just the thought of Toby Young in the alltogether is enough to make me blow chunks! Ewe!!

I should perhaps have blurred the image, hmmmm?