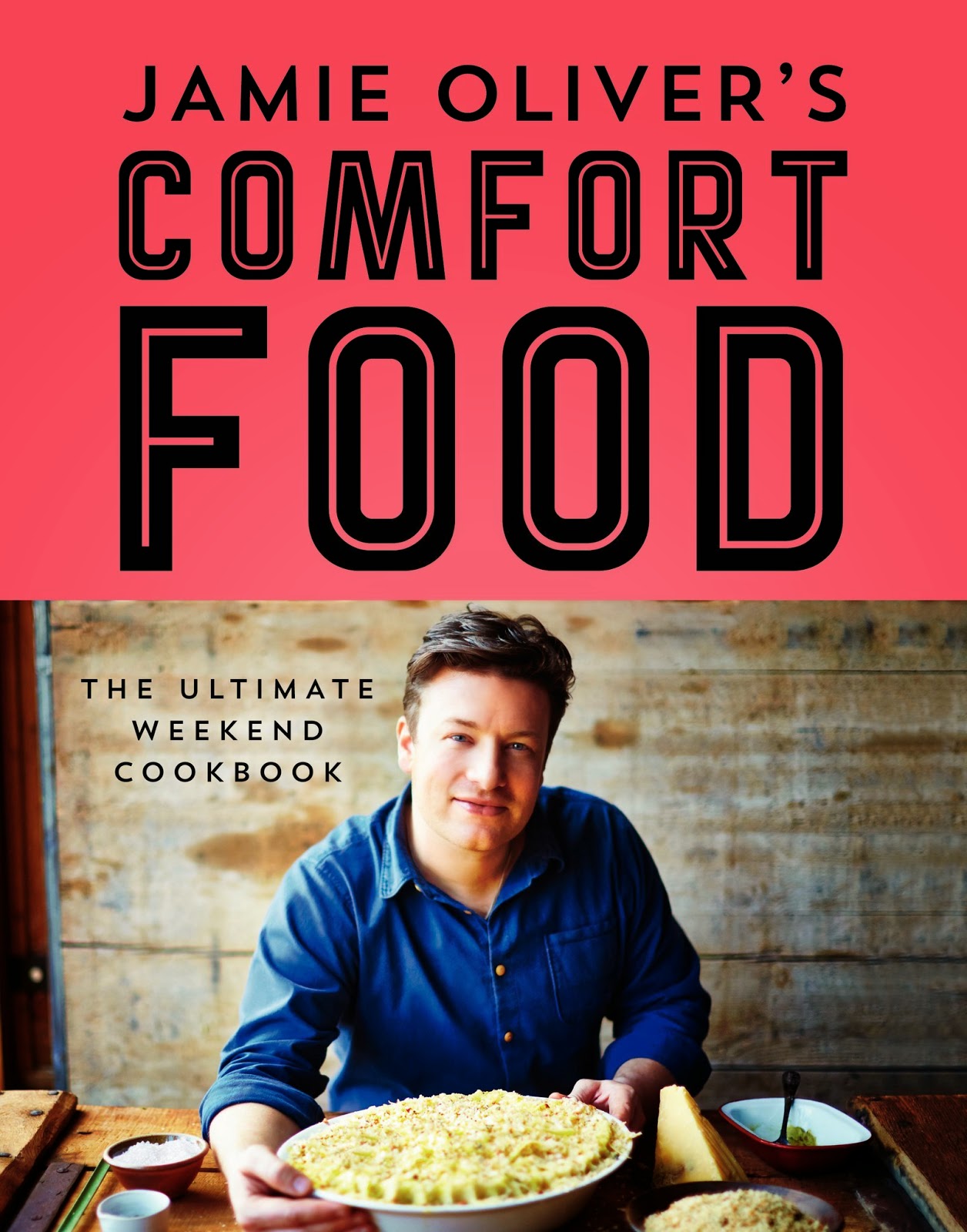 I received several cookbooks for Christmas, and hope to talk a little about each of them here. First up is Jamie Oliver's new one, Comfort Food: the Ultimate Weekend Cookbook.

The book is thick and heavy, so it might seem that there are hundreds of recipes included. Rather, the bulk of the book is food porn--lots of pretty pictures of the various recipes included. And when I say "various," I mean the recipes are all over the place. Oliver's idea of comfort food includes dishes from India and Indonesia as well as British favorites like toad in the hole, sticky toffee pudding, and beans on toast.

I've bookmarked several recipes to try, including the three mentioned above, plus one called Bloody Mary Beef, which seems like a good thing to cook up on a cold winter day, as it spends 5 or so hours in the oven.

The first recipe to strike my fancy, however, was for quesadillas made with brussels sprouts. Unusual? Yes. But also quite good. I would never have thought of this combination, but it worked very well. 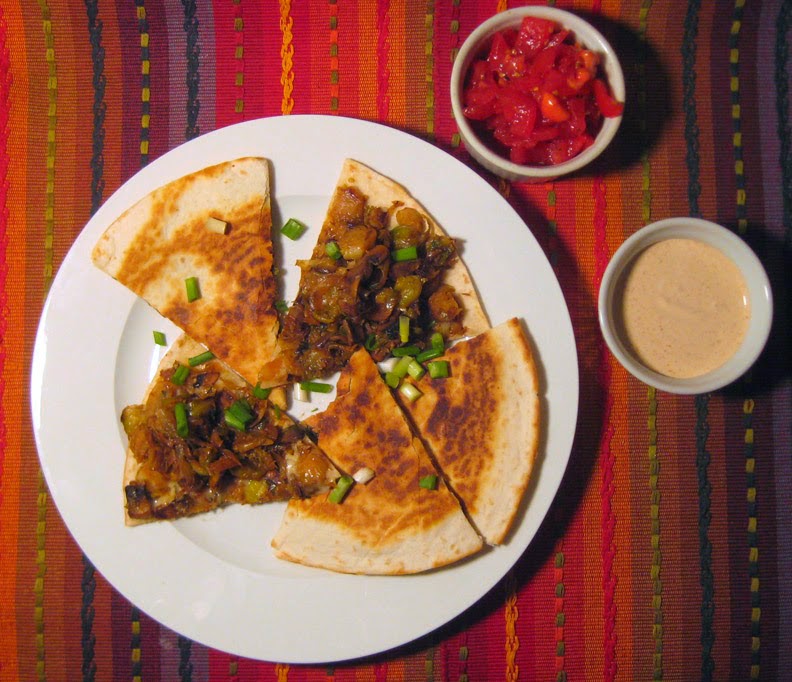 The recipe is pretty simple. I can't share it exactly as written, but it's not rocket science.

Slice up a large onion and half a pound of brussels sprouts (I added a handful of sliced mushrooms, too, because I had them). Toss them in a large saute pan with a pat of butter, or, use a glug of olive oil, as I did. Sprinkle in 1/4 teaspoon smoked paprika, 1/2 teaspoon cumin seeds, the leaves from 3-4 sprigs of fresh thyme, and a big pinch of salt. Cover pan and cook over medium-high heat for about ten minutes, stirring frequently. Remove lid and cook for another ten minutes or so, until onions and sprouts caramelize nicely. Turn off the heat, hit with a squeeze of lime juice, and scrape into a bowl. Wipe out the skillet and spray it with release spray. 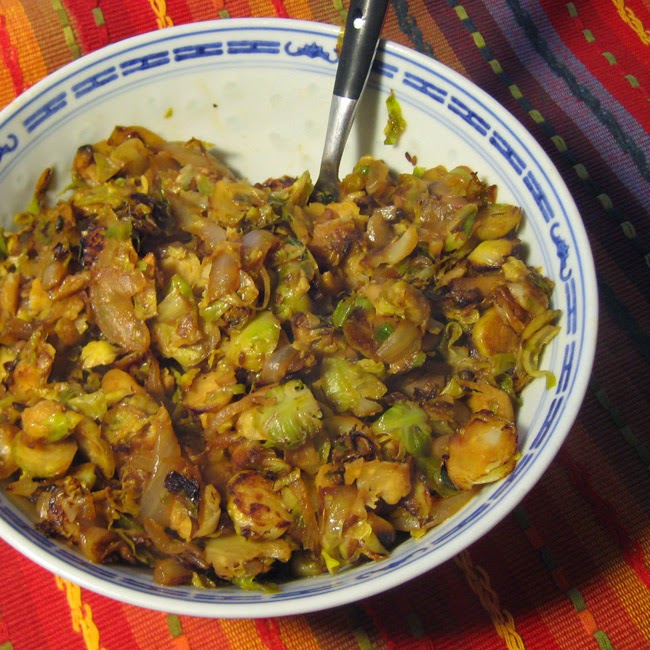 Lay a large flour tortilla out onto a plate or cutting board. Top with enough of the brussels sprouts mixture to cover almost to the edges. Sprinkle with a handful of grated pecorino cheese (as per recipe), or your favorite combo of melting cheeses. I added some shredded sharp cheddar, too, since I had some. Top with a second tortilla.

Heat pan and carefully transfer filled tortillas, making sure not to slop filling into the pan. Cook over medium heat until browned and crisp on the bottom, 2-3 minutes. Flip gently and repeat on second side.

Transfer quesadilla to a cutting board and cut into 6-8 wedges. Serve with sour cream, salsa, guac, chopped green onion, whatever floats your boat. I whipped up a quick sauce with ground chipotle pepper, a dash of agave syrup, pinch of salt, and a squeeze of lime stirred into sour cream. 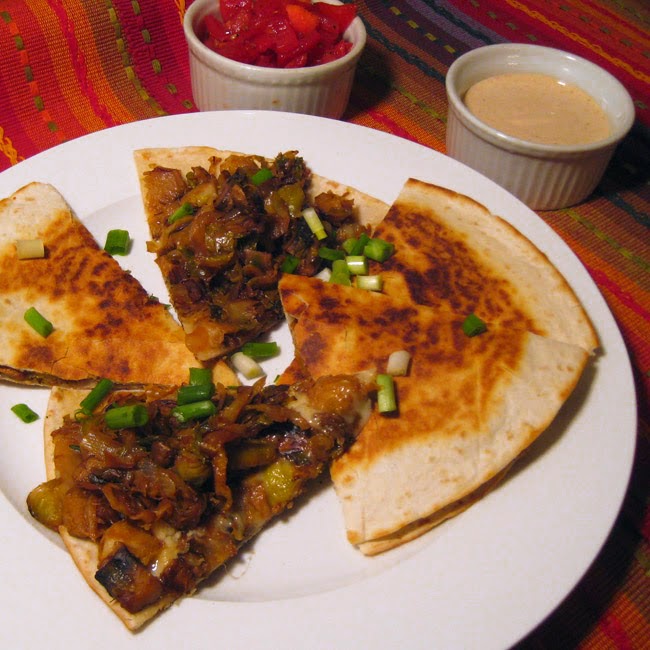 A brussels sprout quesadilla might seem weird, but it was really very delicious. Both Mr Minx and I love brussels sprouts in pretty much any form, so this was a big hit. We made two quesadillas for dinner and had enough sprouts and onions (and mushrooms) left over to make another one a couple days later.