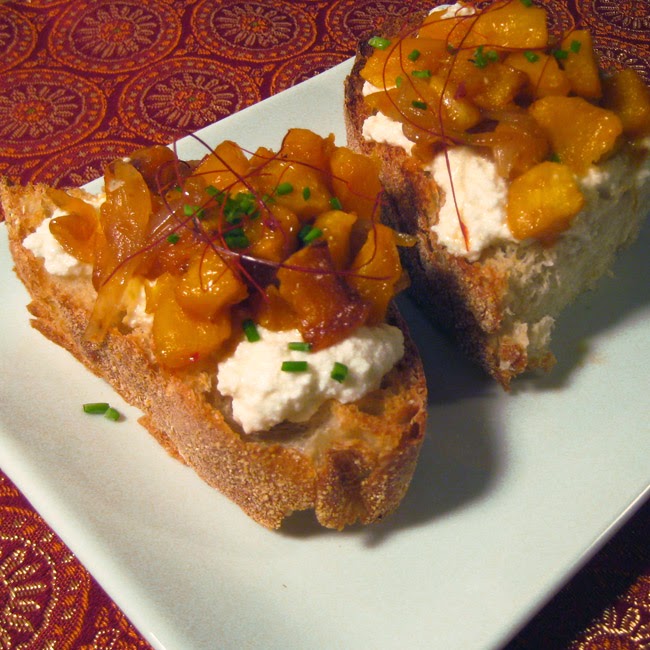 New Year's Eve 2014 was very much a repeat of New Year's Eve 2013: we went to Cunningham's for dinner, came home to watch Kathy Griffin taunt Anderson Cooper until midnight, then toasted the new year with champagne and Christmas cookies. We love that Cunningham's opened in our area; it's ideal for both casual and fancy meals, and because it's so close, we don't have to worry too much about encountering drunken revelers on our way home.

The restaurant offered a prix fixe dinner last year, but we opted to order from the regular a la carte menu. It was less-expensive that way, and allowed us to skip dessert. Plus, there were more selections. I had been intrigued by the idea of butternut squash toasts, a dish that was praised by Richard Gorelick in his 2013 review of Cunningham's. He describes the toast as comprising ricotta, maple syrup, and cider vinegar, in addition to the squash. We ordered the toasts as one of our appetizers and really enjoyed it, even Mr Minx, who is not the biggest fan of squash.

Those flavors stuck with me, and a few weeks into the new year, I decided to try to replicate it. But before I reinvented the wheel, I looked on teh Innernets to see if anything like it was out there. Lo and behold, there was--a recipe by Jean-Georges Vongerichten, which had been restyled and reblogged a couple of times. It involved squash, ricotta, maple syrup, cider vinegar, and thick slices of toast, so I'm pretty sure it's the inspiration for Cunningham's dish. And it seemed easy enough to make at home.

What's not easy is peeling butternut squash. Jean-Georges' recipe called for roasting and mashing, but I liked the diced squash at Cunningham's. Thought it would be more attractive as well. J-G also called for what seemed to be an inordinate amount of cider vinegar and maple syrup--1/4 cup each--and 2 teaspoons of salt. Yowza. No need for either excess; the dish is even better when it's not cloyingly sweet. Besides, all of that additional liquid would make the dish too soupy. Yes, I do have the audacity to question Jean-Georges. Cooking is all about what pleases the eater, not the chef. And this dish is so good, I'd do it all over again.

Butternut Squash Toasts (adapted from a recipe by Jean-Georges Vongerichten)

Preheat oven to 450. Combine squash, 1/4 cup olive oil, aleppo pepper, and 1 teaspoon of salt in a bowl and toss well. Transfer the mixture to a parchment-lined baking sheet and roast, stirring twice, until tender and lightly caramelized, 30 minutes. Remove from oven and set aside. 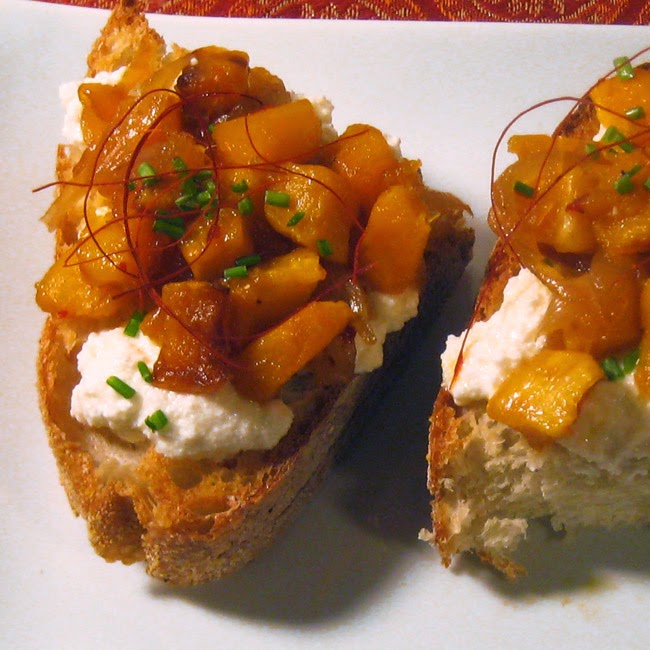 Heat the remaining 2 tablespoons of oil in a large pan. Add the onions and remaining 1/4 teaspoon salt and cook over medium heat, stirring frequently, until the onions are well softened and darkening, about 20 minutes Add the vinegar and maple syrup and cook an additional 10-15 minutes.

Combine squash and onions in a bowl. Taste for seasoning. Add a touch more maple syrup if you want it to be sweeter, but we enjoyed it on the more savory side.

Lightly toast bread. Spread some ricotta on toasts, then top with the squash-onion mixture. Sprinkle with chopped chives and chile threads. 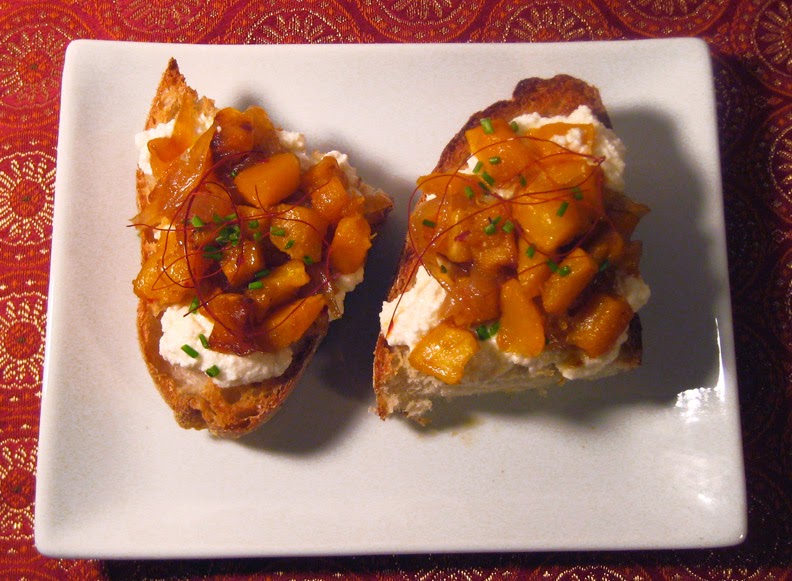