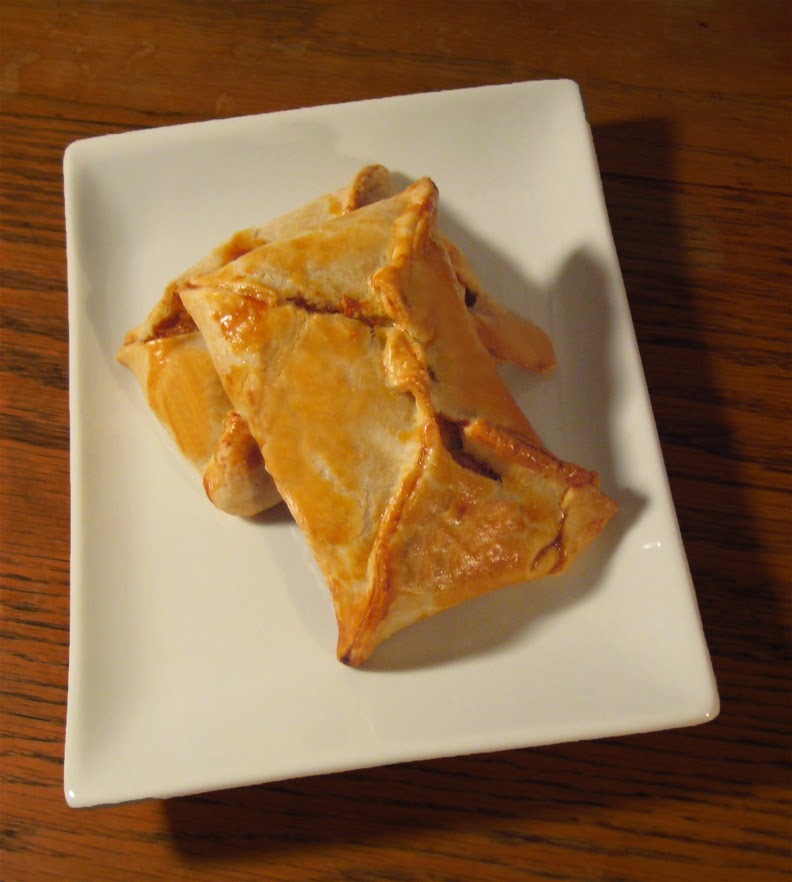 Thank goodness winter squash are so hardy. We had a lone sweet dumpling squash, left over from one on-demand CSA or another, sitting on the dining room table for what seems like months. Sweet dumplings are fairly small, only about 8 ounces or so, and I had no idea what to do with just one of them. Since I was going to roast some other vegetables, I chopped it into quarters and threw it into the oven, too. I'd worry about what to do with it later. At least it was off the table.

After turning the other veg into soup, I tasted the dumpling squash. Unlike many other varieties of winter squash, it was naturally sweet, so it seemed like a perfect pie filling. Except that there was just one of them. Once roasted and scraped, there was a scant cup of filling. I seasoned it up until it tasted even better, then decided to utilize the box of pie crusts I purchased before Thanksgiving (just in case I needed to bake a pie).

All-ready pie crusts are round. I cut one into quarters and added a dollop of filling to the center of each wedge. To form roughly rectangular pies, I folded the dough like an envelope. You may choose to make them look more like a samosa. Either way, they taste yummy eaten warm with a dollop of ice cream.

Preheat the oven to 400°F. Cut the squash into quarters, remove and discard seeds. Rub flesh with olive oil, and sprinkle with salt. Place on a foil-lined baking sheet and bake until tender, 40 minutes to an hour. Remove from oven and allow to cool. Turn oven down to 350°F.

Unroll the pie crust onto a cutting board and cut into quarters. Brush with beaten egg. Place a dollop of the filling onto each quarter. Fold like an envelope or a samosa, pressing edges together to seal them. Brush each pie with egg and place on a parchment-lined baking sheet.

Bake at 350°F for 35-40 minutes, until golden brown. Allow to cool slightly before serving.

If there's any filling left, eat it with a spoon.