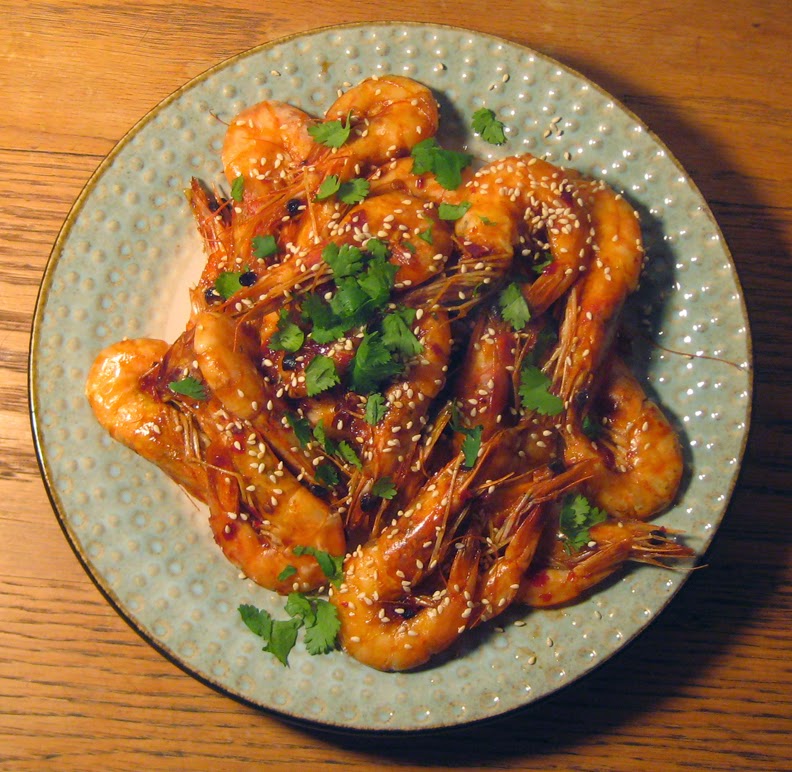 I order head-on shrimp at a Chinese restaurant (especially at dim sum), but I really don't like to eat the heads. To me, they taste funky in a bad way. However, I do like the way they look. So when I saw head-on shrimp for sale at the local Asian grocery store, I bought some. You have to admit, the sinuous curve of their pink bodies paired with the frilly heads and black eyes is quite ornamental. Sadly, they can't be put into a vase or left on the table in a bowl. (The smell would get unbearable pretty quickly.)

Even without any real idea of what to do with the shrimp, I decided they needed to be oven-roasted, whole, rather than pan-fried. Since we were also going to finish up some leftover Chinese-ish soup with the meal, I incorporated Chinese flavors into the shrimp by tossing them in a sauce of black vinegar and chile bean paste, using more of that sauce as a dip.

Eat the heads and shells, or peel them off before dipping. Either way, they're pretty tasty.

Toss shrimp with a bit of olive oil and salt and pepper. Place in one layer on a foil-lined baking sheet. Broil shrimp for 8-10 minutes, turning once, until pink and cooked through.

While shrimp are roasting, combine soy, vinegar, doubanjian, garlic, sugar, and ginger in a small saucepan. Bring to a boil. Turn down heat and cook for a minute or so, making sure sugar is dissolved.

When shrimp are cooked, put them into a large bowl. Pour over half of the soy mixture and toss well. Pour remaining soy mixture into a ramekin, to use as a dipping sauce.

Arrange sauced shrimp on a plate. Garnish with sesame and cilantro, and serve dipping sauce on the side.