Of Love and Regret - Part II

Mr Minx and I went to Of Love and Regret to celebrate his recent birthday. We started off with the crispy pig's ear appetizer, which I had enjoyed on my first visit, and a soft shell crab sushi roll, before heading to the main attraction:

OL&R makes hefty 8oz patties and serves them with an interesting array of toppings, on your choice of bun or house-made croissant. 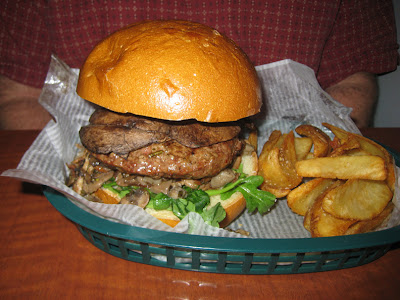 Mr Minx went for the Canton Burger, which was topped with such sundry things as rosemary-infused portobello mushrooms, bratwurst pellets, and arugula. I probably should have had him put his hand on it for scale, because the thing was huge. As far as the burger is concerned, that's not a complaint. But the bun was far too large and unwieldy. (I had heard that the croissants were a bit over-the-top and fell apart, hence our choice of buns.) 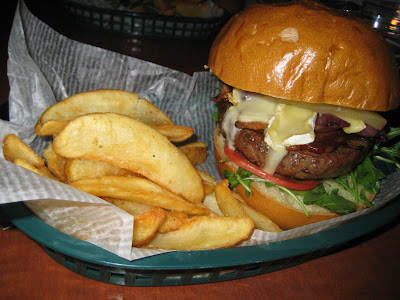 I went for the French burger, with brie, brandy-poached pears, grilled onions, and bacon. The oversized bun really muffled the delicate flavors of my toppings, which were delicious when eaten separately. That quibble aside, the burgers were perfectly cooked to medium, were juicy, and came with outstanding steak fries. I'm usually not a fan of the thick-cut potato, because they're often too starchy and not crisp enough. Not so with OL&R's potatoes, which were cut with a slight curve, for just that much more surface area. They were crisp and nicely salted and something I wouldn't be averse to eating in a bottomless portion.

But that's not all, folks! Thanks to the half-portion beer servings available, we were able to try six different brews, all of which were outstanding. I wish I had written the names down, because the online menu of "current" drafts is quite different. All I'm sure of is that we tried the Stillwater "Existent," which reminded me of marigolds. Another beer was very caramelly, and would make a splendid dessert, and yet another had a lovely coriander flavor. Honestly, if you like beer (and even if you think you don't), head to OL&R and try a couple three. You will be happy you did.

Note: I'm praising the food at OL&R so of course Ted Stelzenmuller has left the restaurant and gone back to Jack's Bistro. Expect a complete food menu change by October.