This post was originally published on February 27th 2010. It's not much of a post at all - just a couple of sentences and a photograph of Kim Kardashian's ass - but it's one of the most popular posts ever on Minxeats. There have been thousands and thousands of Web searches for "Kim Kardashian spanx" that have landed nosy googlers on this page, and I'm still at a loss for why anyone cares about her cellulite.

Apparently Kim Kardashian has a cupcake mix now, sold by Famous Cupcakes in California. Yes, even you, lowly non-celebrity-for-no-reason, can bake cupcakes just like the ones that Kim Kardashian eats, for a mere $13! 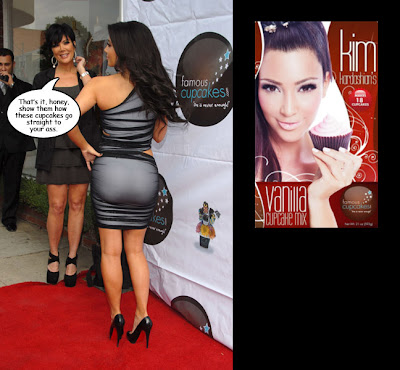