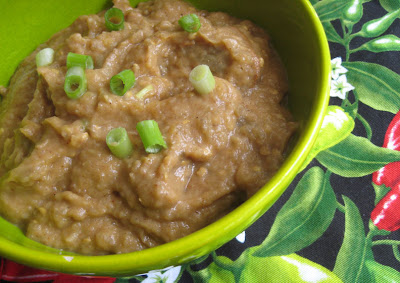 I whipped up a batch of babaganoush the other night and thought that it would be even better had I smoked the eggplant first. So while the smoker was still not put away (weeks later!), I cut an eggplant into thirds lengthwise and popped it in with some hickory chips and a quarter of an onion, roughly chopped.

I still had babaganoush in the fridge, and I wasn't about to make another similar batch, so I winged it with stuff hanging around the pantry. I dumped a small can of chopped green chiles in the food processor with the smoked eggplant (which also needed 5 minutes in the microwave to make it tender), lime juice, tomato paste, the smoked onions, and a big pinch of Penzey's Arizona Dreaming spice mix. It was pretty good, but needed a little more sumpin' sumpin'. In went a squeeze of agave syrup and a dollop of almond butter. And salt and pepper of course.

Now we were talkin'. A Southwest-ish babaganoush that goes just as well with pita bread as the standard, but with a new twist. I know most folks won't have a stovetop smoker, so just fake it with some smoked paprika.

Slice off blossom end of eggplant and discard. Cut the eggplant in half horizontally and place it, cut side down, on a microwave-safe plate. Cover with plastic wrap and microwave for 10 minutes, until it collapses and is very tender. Set aside to cool. When cooled enough to handle, scrape pulp into the bowl of a food processor. Add the next 8 ingredients and process until pureed. Season with salt and pepper. Garnish with scallions and cilantro.