This post was originally published on August 12, 2009. Since then, Jesse Sandlin has left Abacrombie, helped open Vino Rosina, and worked in many places before, after, and in-between. The last time I caught up with her, she was waiting tables at Of Love & Regret because not cooking gave her a little more time to concentrate on her plans to open her own place sometime in the near future.

She's a cool chick. We hope she opens her restaurant soon. :)

Three of the cheftestants in the upcoming season six of Top Chef hail from Maryland, two from Frederick, and one from Baltimore. MinxEats recently got to ask fellow Baltimorean Jesse Sandlin a few questions.... 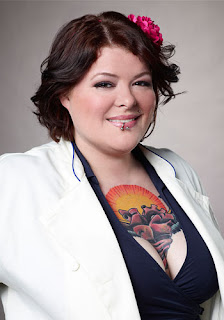 M: Do you know Jill Snyder? Have you had a chance to sit down with her and chat about your experiences on Top Chef?

JS: I do know Jill. we first met at an event that we both did at Abacrombie hosted by Lars Rusins of the Baltimore Foodies, featuring female chefs from Baltimore. I have not had a chance to hang out with her at all since I got back from filming...things have been crazy for me since I got back!

M: Your Bravo bio lists five things you keep at hand at all times: bacon, butter, duck fat, cumin, and trash bags. Why those five items in particular, and what is your favorite way to use each of them?

JS: bacon because I think it's delicious! buttah, because it makes everything bettah!, duck fat because I do a lot of confit, especially in the fall/winter and trash bags because, have you ever been in a kitchen without trash bags? it's awful. also because I couldn't think of a 5th thing that I always always have in the restaurant because the menu changes so frequently. my favorite of those is probably bacon-the smokiness of it, the fattines, the crispness, it can be used in sweet or savory dishes....everything is better wrapped in bacon.

M: How hard is it to make it to the position of Executive Chef when one is self-taught?

JS: I think it's the same as rising to the top in any career. self taught or no...it's about having the drive to get to where you want and to be good at what you do and always striving to be better...

M: How long have you been a professional chef? If you couldn't be a chef, what would you want to do with your life?

JS: I've been cooking in professional kitchens for 15 years. I don't know what I would do I'd I weren't a chef. I used to want to be a teacher.

M: What do you think about the Baltimore food scene?


JS: I think the Baltimore food scene is improving greatly. there are a number of worthwhile restaurants in the area, and a ton of really talented chefs.

M: What is your current favorite dish served at Abacrombie?

JS: it's restaurant week right now, so the menu is a little different than normal, but right now i'm loving the roasted half chicken with squash and heirloom tomatoes.

M: As a Baltimore native, what do you like best about our city?

M: You seem to have a quirky personal style. Where do you like to shop for clothes and accessories, in Baltimore and elsewhere

Thanks, Jesse! We hope to see you go far in the competition!

Read more about Chef Sandlin here, at All Top Chef!