This week's episode starts out with a scene of the cheftestants in the stew room after the verdict has been delivered. Nobody pretends to be sad that Beverly is gone, apart from Grayson, who is possibly too nice for her own good. And then Charlize Theron comes in to hide; Tom has apparently been chasing her all around the studio, asking her to autograph his head.

The next morning, upon entering the Top Chef GE Conveyor Belt Kitchen, the six remaining cheftestants find Padma standing with regular judge Emeril Lagasse and this episode's guest judge Cat Cora. Cat is there for one reason only: to plug her upcoming Bravo show, Around the World in 80 Plates. Her co-star will be creepy Aussie Curtis Stone, so it's a safe bet I will not be watching that hot mess. Anyhoo...once they get the plug in, the challenge begins. 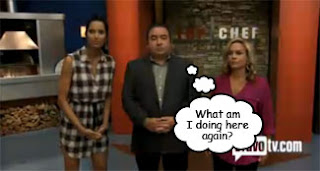 Padma pairs up the chefs into three teams: Team Red is Sarah and Lindsay, Team Green is Grayson and Squinty, and Team White is Ed and Paul. Each team must peel and devein a gazillion shrimp, shuck and de-silk umpty-three ears of corn, and make 43.6 pounds of fresh fettuccine - all in forty minutes. But wait - there's more! They will then have to use the resulting mise en place to create a dish in whatever time they have left. All of this is told to us by Padma in a voice-over with such poor sound quality it seems to have been recorded in an airplane bathroom during turbulence.

And what's with Padma's...dress? She looks to be wearing one of Larry the Cable Guy's shirts. All three teams are smart and head for the pasta first, since they know that will take the most time to make. Despite being in a hurry, none of the six manages to maim themselves with pickle forks or apple peeler/corer/slicers or whatnot during this challenge! 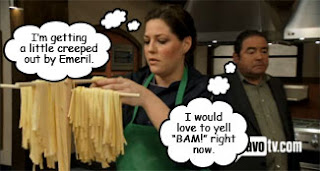 Red Team is the first to complete their meez, so they have more time to fiddle around with a pasta dish. Unfortunately they use tarragon, and Cat Cora doesn't like tarragon. Team White finishes second, but Paul forgets to cook the shrimp for the dish, so they are disqualified. Finally, Team Green, despite having the shortest amount of actual cooking time, pulls off a shrimp and bacon pasta that is good enough to get them the win. There's no immunity at this point, but the two chefs get to share $10,000.

On to the Elimination Challenge. Padma immediately breaks up the teams and tells them they will now be competing head-to-head. Or as they say in Spanish, cabeza a cabeza. Not to be confused with calabaza a calabaza, although, some cheftestants' heads are, at times, quite indistinguishable from pumpkins.

Each pair will choose a dish appropriate to serve to 200 people at a block party and each half of that pair will prepare his or her own version of that dish. The chefs pow-wow and Ed and Paul decide to make Korean short ribs, or kal bi. Lindsay and Sarah settle on meatballs. And Squints and Grayson go for chicken salad. And then Padma throws them a twist - they have to make diet versions of their chosen dish, because this challenge is sponsored by Flavorless Healthy Choice!

Groans all around, mostly from me.

The chefs get 2.5 hours to prep their dishes at the Culinary Institute of America kitchen. Squinty reveals that he's making a tofu-based sauce for his salad, and people will never believe it's not mayonnaise! And I'll never believe that statement! Paul is using ground turkey for his kal bi, which he will be serving ssam style with lettuce wraps. Ed, for some odd reason, despite this being a Healthy Choice challenge, is going with traditional beef short ribs. Now, we all know that the whole reason short ribs are so delicious is because they are fatty and full of cholesterol. Instead of the traditional rice accompaniment, full of empty calories, he's making...steamed buns. But hey! They're homemade steamed buns! And...steamed buns are so trendy! That's using your calabaza!

Ed, I'm thinking you know as much about healthy food as Paula Deen. Allow me to enlighten you. The packaged low-cal food industry would have us believe that "healthy" food involves boneless skinless chicken breast, Special K, no salt, and a lot of onion powder - guaranteed to stink up the microwave in your workplace kitchenette without adding any actual flavor to the dish. 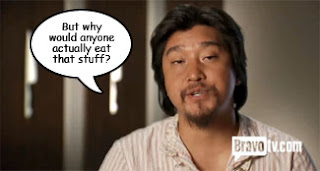 A properly healthy diet also includes a generous dose of guilt for every time one merely looks at a tub of Ben & Jerry's Chunky Junky in My Trunky ice cream.

After packing up their shit, the cheftestants head to their outdoor venue, which is 105F in the shade and infested with bees. Squinty no like bees and says if a couple of them zap him, he'll swell up like the Sta-Puft Marshmallow Man. Part of me wants to see that. Part of me is also terrified of bees. 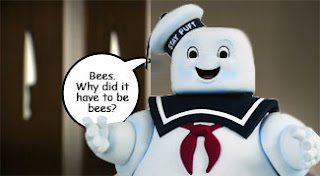 The hungry hoards rush in to eat, along with our intrepid panel of judges and Food & Wine's Dana Cowin. They are each carrying a bag of food for the San Antonio Food Bank. Do you think they are donating the typical expired cans of Dinty Moore stew and creamed corn, or something more exotic, like corn cobs and shrimp peelings from the most recent Quickfire? 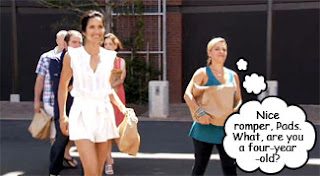 Season 4's Ryan Scott is on hand as a "flavor ambassador" for Healthy Choice. 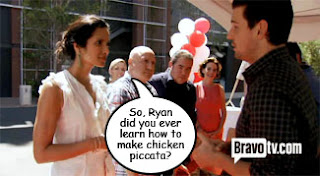 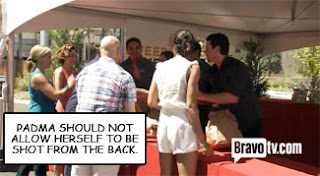 The judges do the rounds and declare Paul's lettuce-wrapped turkey to be simply delicious, and impressive in that he built layers of flavor without using fat. Ed's meat, on the other hand, was tough and chewy. [Insert joke here.] The chicken salad chefs were meh and more meh. Grayson's didn't have a lot of flavor, but she did make her sandwiches to order, while Squinty's bread had dried out from sitting in the heat and his tofu mayo didn't impress anyone. Plus, his sandwiches were covered in bee poop. Then the Meatball Girls came up to bat. Lucky for them, both Lindsay's and Sarah's balls o' ground protein were fine and dandy. Predictably, Cat Cora raved over Lindsay's Greek-ish balls. 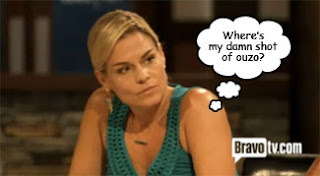 The winning chef from each head-to-head match-up was chosen by the 200 non-judge diners, who preferred Paul's, Grayson's, and Lindsay's dishes over those of their competitors. The overall winner was then selected by Tom, Emeril, and Cat Cora. While they really seemed to love Lindsay's veal and lamb concoction, they were blown away by Paul's dish and gave him yet another win, and a cool $15,000 for his wallet. That brings him up to, what, $50,000 so far?

Bet he'll have lots of date offers when he gets back home. 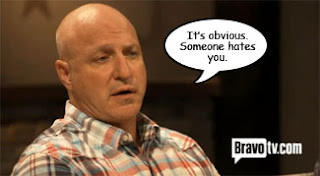 As the low scorers, Ed, Squinty, and Sarah are on the chopping block. Sarah is safe because her dish was really good, it just wasn't as good as Lindsay's. Boo. I was really hoping one of those harpies would go this week. Instead, it's starting to look like Ed has made the most egregious errors: he really didn't pay attention to the healthy portion of the challenge, and his meat was tough. Squinty did indeed try to make his dish light, but as always, he's all about the ideas and not so much about the execution. Tom is apparently tired of the whole magic Moto cuisine schtick and Squints is sent home. 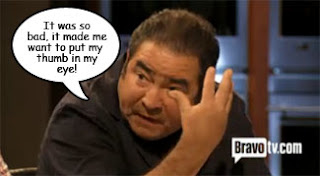