I got some good response to last week's recap, so I'm doing it again! Lucky you!

Last week, scrawny singer Aaron Carter got bumped because he didn't know a spatula from a spittoon. This week, it's someone else's turn to say bye bye. But first - the challenge.

Two of the Food Network's Most Annoying, Guy Fieri and Rachael Ray, meet with their now-lopsided teams (4 on Guy's, 3 on Rach's) to give them the next hurdle in the race to that $50,000 charitable donation from the Food Network. Oh, didn't I mention that last week? Each of the "celebrities" is playing for a charity and not to line their own pockets. This week's battle involves something near and dear to every chef and chef-wannabe's heart - desserts. Each team is responsible for four desserts in two hours, including the 3-man team, who must work together to produce the fourth dish. 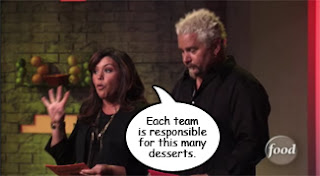 Alyssa insists she's all about desserts, although I doubt she's ever ingested anything more dessert-like than a stick of sugarless gum. Lou Diamond Phillips (LDP henceforth) is in a tizzy and says he'd rather arm-wrestle Robert Irvine. (Producers are now frantically at work on the new Food Network series, Arm Wrestling: Impossible.)

Having to make a dessert is bad enough, but there's also a twist. One of each team's dishes must include a savory item. Rach picks horseradish for Guy's team, and Guy - ever the bastard - picks anchovy for Rach's team.

The two teams make plans. AKA they go back to their respective stew rooms and tear out their hair/wring their hands/sob quietly. Both Rach and Guy insist that the savory item would make a fabulous cannoli filling. The teams are dubious, but they barely have ideas of their own. Alyssa, the wanna-be pastry chef, insists that she's going to make profiteroles with a raspberry filling. Cheech is going to make poached pears and...wait for it...brownies! 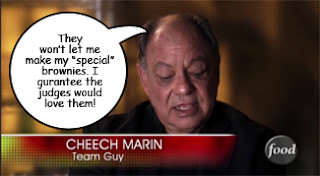 Coolio intends to make a lemon pudding cake a la his grandma. And FatOne, without ideas of his own, gets stuck with making the wasabi cannolis. Over on Rach's team, LDP reluctantly declares he will make lemon curd-filled puff pastries with limoncello cream and a berry prosecco sauce. Summer is making spicy fudge (insert poop joke here). Taylor wants to do something with strawberries and Rach suggests shortcake with basil and balsamic. Finally, the anchovy cannoli falls to the whole team.

Suddenly, the show switches from Celebrity Cook-Off to Worst Cooks in America. Coolio starts off making his cake with a prepared batch of pudding, then wonders why his batter is weird and not cooking properly. (Because you're supposed to put dry pudding in the batter, not wet.) 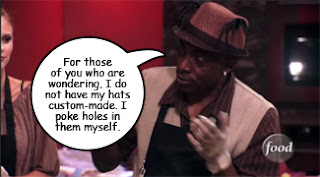 Alyssa is whipping up what looks like pancake batter in a bowl, and I'm wondering if she's changed her mind about making profiteroles. Profiteroles are made from choux pastry, which is cooked. First one makes a rather doughy roux-like mixture, then beats in eggs. The end result is a thick, shiny paste. Meanwhile, Alyssa wonders why her dough is runny and starts adding flour to thicken it. She asks Coolio for guidance (!) and he suggests adding more butter. Eventually, she comes up with something that seems to please her, she puts it into a piping bag, and then glops it onto a baking sheet. It's pretty obvious that it's NOT choux pastry, but when Guy comes around, he lets her do her thing. 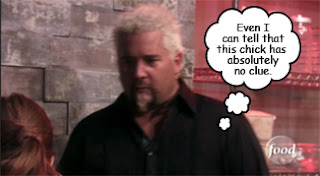 Meanwhile, LDP can't seem to get the right balance of tart and sweet in his lemon curd. He's also panicking that his puff pastry needs a lot of time to thaw and time is flying. Speaking of flying, Coolio is determined to complete his cake on time and cranks his oven up to 500F. This is all making me really nervous. 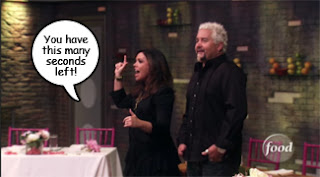 Eventually all of the mayhem is over and the celeb teams theatrically present their desserts to the judges before skedaddling to their stew rooms. The judges for this battle are thirteen pastry students from the Institute of Culinary Education, and they are beginning to wonder what they've gotten themselves into. 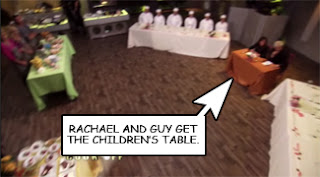 They are all amazingly polite, because nobody says, "this isn't a #%&@&* profiterole!" when fed Alyssa's flat hockey pucks. Instead, they merely claim to prefer raspberry filling without seeds. Honestly, these kids seem to really enjoy everything, including Coolio's pudding cake. And they love the anchovy cannoli.:::shudder::: 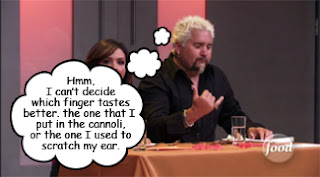 Later, after the students leave to get their stomachs pumped, Rach and Guy tell Taylor that her shortcake was the favorite dessert of the day. I'm impressed that she was able to conjure up a biscuit recipe that worked. Perhaps Taylor has a copy of the Joy of Cooking hidden in her ample cleavage? Her dish looks good, too. Then the winning team is announced - it's a tie! How convenient. Rather than picking the worst dish from each team, Guy and Rach decide that the team captains appointed earlier in the day - Alyssa and Summer - will do battle.

The theme for this week's 10 minute challenge is salads. Summer attempts to cook salmon but doesn't take into account the thickness of the filet - it won't cook in time. Alyssa goes with portobello mushrooms, and she makes a simple oil and vinegar dressing. When Rach and Guy do their blind taste test, they decide they can overlook Summer's undercooked salmon because the rest of the salad was pleasing both visually and in flavor, whereas Alyssa's was boring, particularly her dressing.

Thus Alyssa's undernourished ass is given the boot. 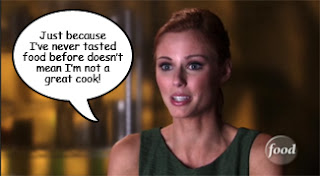