After two weeks away from Top Chef, I almost missed it. Notice that I said "almost." While I do enjoy watching the show, taking notes for a recap does take a bit of the pleasure out of it. As do episodes that are "Supersized" for no apparent reason. Luckily, this one didn't feel padded.

Episode 9 starts out back at the hotel, immediately after the last Elimination Challenge. The cheftestants are seated at the dining room table, enjoying a drink or six, and lamenting the loss of Chef Super Bitch. Well, not exactly lamenting. 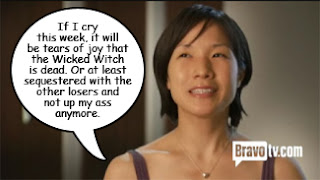 Beverly actually seems cheered that the bully is gone, and Ed tells the group that the cake that Heather had done so well with in two challenges were made from his genoise recipe. The other chefs seem surprised at the revelation, but Sarah thinks it was a passive-aggressive thing for Ed to say at the time. 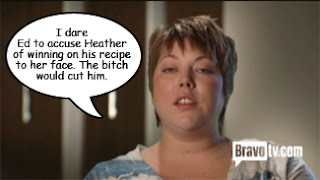 There's a knock at the door and a delivery for the chefs - a service cart loaded with copies of the five volume Modernist Cuisine, by Nathan Myhrvold. There's also a note from Padma suggesting that the chefs study the books for their homework.

The next morning, the unassuming and rather nerdly genius billionaire Myhrvold himself is standing with Padma. During the press phone interview that I participated in before the start of the season, Padma claimed to be especially stoked about the presence of Myhrvold on the show, and insinuated that they were good friends. Of course - he's rich. Pads really enjoys..ahem...spending time in the company of wealthy men, and I wouldn't be surprised if Myhrvold was one of a long line of billionaires she auditioned for the role of babydaddy. I may not like Padma, but I have to admit - she's no fool. 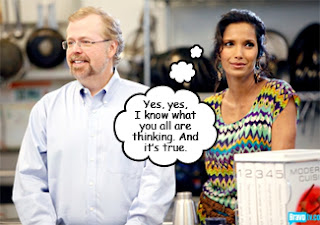 Predictably, the Quickfire Challenge is to create a dish using "modernist" techniques, also un-popularly known as "molecular gastronomy." Marcel Vigneron would have been in heaven were he able to participate in this challenge, what with his propensity for foams and shit. This season, it's Squinty Chris who likes to play with his food, and is paid to do so at Homaro Cantu's Chicago restaurant, Moto. He thinks he has this challenge in the bag.

We cut away to the other Chris, the handsome Malibu version, who is telling us he likes modern stuff. His apartment is modern. He likes modern art. In fact, he paints. Nudes. Really bad nudes. But they're modern. 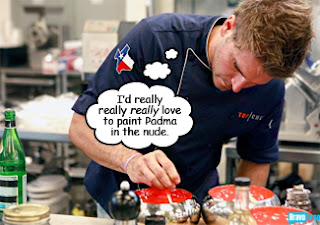 After 45 minutes of cooking, the cheftestants put down the liquid nitrogen and Padma and Myhrvold go a-tasting. The first person they visit is Beverly, who has made a curry foam which she immediately propels out of the canister and onto Padma's dress and Nathan's pants, making them look like they just got back from an awkward quickie in the walk-in. (Speaking of Padma's dress, it appears that she was one of the few people able to purchase something from the Missoni collection at Target in the 13.5 minutes before it sold out.) And on down the line they go without out further mishap.

Myhrvold is least impressed with the dishes of Paul, Beverly, and Grayson (all of whom admit that molecular gastronomy isn't their thang - Paul can't even pronounce it), but loves those of Sarah, Squinty Chris, and most of all, Jor-El. Jor did something extremely simple - a single cube of watermelon topped with an olive oil and tapioca maltodextrin powder which returns to liquid when eaten. It's a cool trick - I've done it before myself - and it was enough to get him not only immunity in the next challenge but also a set of those coveted cookbooks, which he immediately claimed and dragged over to his station. 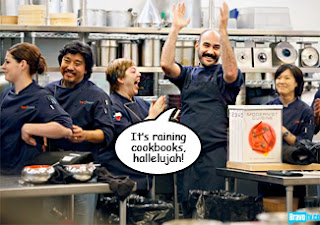 Honestly, I like Jor-El more and more every week.

On to the Elimination Challenge, which Padma says will take them from the modern to the traditional. When she announces that the group will be cooking barbecue, Sarah, the native Texan, starts to squeal like a little piggy. Padma then directs the cheftestants to form three teams of three and informs them that each team will be responsible for chicken, pork ribs, and beef brisket, plus two sides, for 300 diners. Sarah, Ed, and Ty form the Red Team, Paul, Lindsay, and Grayson get together as the White Team, and the two Chrises are stuck with Beverly in the Blue Team.

First the chefs go shopping, with $1000 per team to spend at Whole Foods and another grand to spend at Restaurant Depot. After that, they go to their cooking venue, a famous BBQ joint called The Salt Lick, where they are shown the pits and enjoy the flavors of some 'cue.

Later, they are taken out to another part of the property and shown the replica pits that they'll be working in, plus trailers and a smoker. It's 10pm and the chefs are just getting started - it's going to be another long all-night challenge. The cheftestants will need to use lights strapped to their foreheads to see anything out there in the long dark - and hot - night.

Might be fun to toss a truckload of hungry coyotes into the mix right about now. There'd be a huge bloody battle, with Ed emerging the victor, having joined the coyotes in vanquishing the other chefs and thus winning the competition by default. 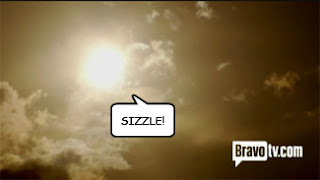 The next day, the sun comes up and only makes the place hotter. The chefs are giddy from lack of sleep, and Sarah is feeling quite woozy. Eventually she can't stand it anymore and calls the medic, who gives her oxygen and takes her blood pressure. 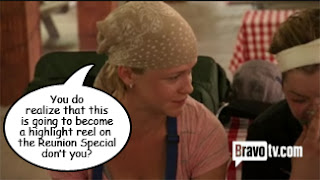 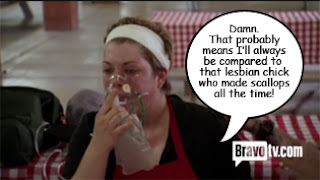 I know exactly how she's feeling - I have vasovagal syncope, and every once in a while my blood pressure drops such that I get cold sweats and eventually pass out. Once I come to, I'm fine. But Sarah doesn't let herself pass out. Instead, she lets the medic put her in an ambulance and deliver her to the hospital, pissing off her teammate, Ed. He seems to think she should cook through it. After all, she's not dead. 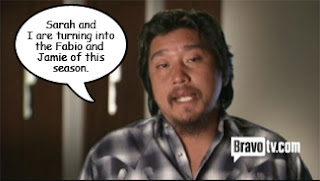 Having dealt with the same symptoms on a regular basis, I agree. I once got sick while preparing a birthday dinner for an old bf. Once I recovered, I managed to not only make him a cake, but I also had to walk half a mile to the store for some eggs to make said cake. And here I am, still here, 16 years later. (The ungrateful bf dumped me a few days later. In the long run, I can definitely say that was for the best.)

Cooking time is winding down and the cheftestants start setting their food out for service. Ed gets out his frustrations by stomping around and tossing the chafing dish lids so they clatter loudly. Ed does exactly what both Mr Minx and I would do; he's like our cranky brother from another mother. And his solution to the one-man-down problem was to pre-cut all of their meat before service and load it into chafing dishes. He thought portioning it while serving would be a bad thing to do if there was a long line for food. And of course there are long lines - 300 people show up all at once and they are hongry.

And looky who conveniently recovers from her malade just in time to serve the judges, who are making the rounds after everyone else is served. 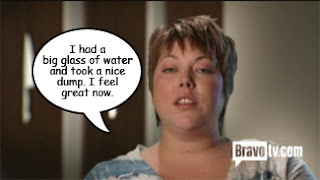 The judges visit the Blue Team's stand first. Their meats are all good, but their brussels sprouts are undercooked. The White Team gets tested next, and right away there are complaints about the saltiness level of the ribs, and the fact that the chicken tastes more grilled than barbecued because there's no smoke flavor. Their beans are undercooked and the slaw is boring. 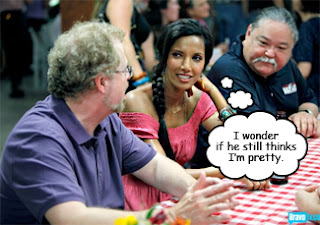 Finally, on to the Red Team, whose steamed brisket doesn't win any fans. 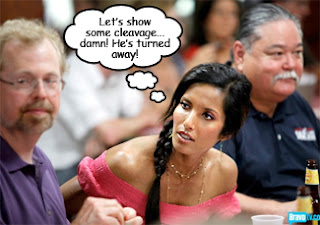 Finally everyone is done eating and the chefs await the verdict. Padma calls out the Blue Team to Judges Table. Paul, Lindsay, and Grayson's Asian flavors were unconventional but a big hit, and they are the winners who get to split $15K between them. Paul does a quick calculation and states that he's won 35 thousand smackeroos so far.

Who out there doesn't think this man is going to win this competition?

Blue Team goes back to the pic-a-nic table that's serving as the stew room and tells everyone else that they are facing the firing squad. Kal-El is safe, because he won immunity in the Quickfire, but each of the other cheftestants has committed some sin and is on the chopping block. 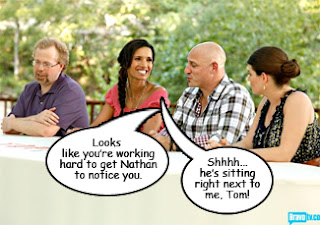 Tom seems to hate everything, from Squinty's beer can chicken, to Bev's undercooked beans, to Kal-El's ribs. He really wants to send Kal home, but he can't, so the judges deliberate for a while before deciding that Handsome Chris - who made a too-salty dry rub - was the biggest loser.

Bye, Handsome Chris! You will be missed. Maybe not by Padma. You couldn't afford her.

I thought for sure you would have a repeating video of Grayson doing the little green frog song. I had dozed off slightly and woke up to the clip. My first thought was WTF, then it was, what will Minx write about this!