As I posted a while ago, I am now the proud owner of a SousVide Supreme. The manufacturer, Eades, calls it a "water oven," which I suppose is more accurate than "immersion circulator," which is what Top Chef and Iron Chef fans may be more familiar with. The modernist cuisine (today's favored term for "molecular gastronomy") technique of sous vide is a method of cooking food--sealed in plastic bags--in a water bath. Yes, I suppose folks have been cooking their Green Giant broccoli in cheese sauce that way for a long time already, but that's really just defrosting/warming and not really cooking. The term "sous vide" (soo VEED) actually refers to the vacuum-sealing of the food, not the cooking process itself, but has come to be used for both. In any case, the SousVide Supreme is basically a rectangular chamber rigged to maintain the constant temperature of water placed within it.

Sous vide cooking is especially good for proteins, which can be cooked to their ideal temperature of doneness without fear of overcooking. For example, if beef is perfectly medium-rare at 132F, and it is prepared at 132F, it can never reach temperatures of 140F or over and become overcooked. While I've tried cooking soft-boiled eggs in the SVS, I'm still a little intimidated about the idea of cooking meat in it. So...in my next attempt at using the thing, I cooked...vegetables.

The SousVide Supreme Web site offered an interesting-sounding salad of fennel and apples, so I gave that a whirl.

Because I couldn't suck the air out of the bags, and apples and fennel aren't heavy, the bags floated in the water bath despite my attempts at weighting them down or using the rack that came with the device. (I need to buy a brick for doing this kind of thing in the future.) Eventually, I managed to get both bags mostly submerged and cooked the items for the requisite hour. 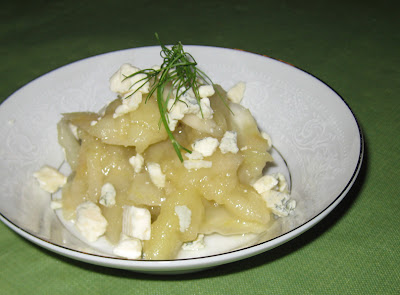 I skipped the greenery part of the salad and just served the apples and fennel with bleu cheese. It tasted pretty good, but the texture was a bit soft. Now I'm thinking I should have just run the fruit and veg through the blender and made a lovely purée of it. Next time....

Also next time...I need to get brave enough to cook meat. Maybe salmon.