Blue Agave is one of those restaurants I've always wanted to visit, but due to the challenges in finding a parking space in Federal Hill and their once-odd hours (they were closed on Tuesdays, for example), we never managed to do so. Their Restaurant Week menu looked good enough to entice us to try harder this time, and an early reservation rewarded us with knowledge that there are parking spots to be found before 5pm during the week.

Hey, I work banker's hours and can practically walk to Federal Hill. It makes absolutely no sense for me to go home in the opposite direction and then drive back downtown.

Despite the attraction to the Restaurant Week menu, we ended up ordering off the regular menu and saved some $ by skipping dessert. After devouring a basket of Blue Agave's addictive, freshly-fried, and lightly salted corn tortilla chips served with a trio of salsas, there was no way we could have eaten three more courses. With the chips, Mr Minx had a Dos Equus Amber, and I tried the Spicy Guavarita. Guava can be pretty sweet, but tempered with lime and pineapple juices and a nice dose of chili-infused anejo tequila, it makes for a well-balanced and exotic variation on a margarita. Make sure to try it with a salted rim for maximum flavor impact. 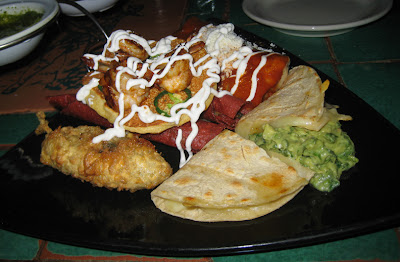 For a first course, we tried the Entremes Surtido, an assortment of appetizer-y goodies. The plate was heaped high with a somewhat-dry corn cake topped with three small chipotle-flavored shrimp, two crispy chicken flautas, a simply delicious crisp-and-melty shrimp quesadilla, a queso-stuffed jalapeno, fresh guac and salsa, and a chile/cheese tamal with an unusually moist and cornbread-like texture. 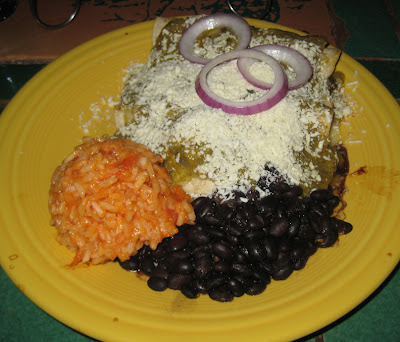 At this point, I was already full, but I pressed on with my entrée, a platter of chicken enchiladas verde with red chile rice and black beans (which I subbed for refried beans). While the dish was simple fare, the typical stuff one might find in any Mexican restaurant, it was well-prepared. The chicken thigh meat was juicy and flavorful, the cheese was melty, the corn tortilla wrappers fork tender. And the portion was large enough to afford me a lunch for later in the week. 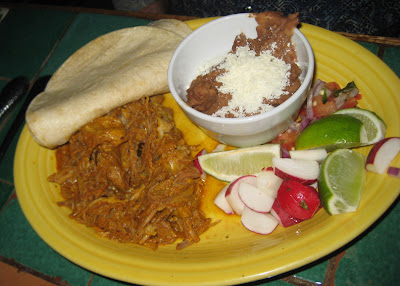 Mr Minx tried the carnitas, which came with corn tortillas, refried beans, pico de gallo, and a radish salad. I'm forever trying to find an equal to the carnitas I ate in San Diego 20+ years ago, and these weren't it. However, the slightly sweet meat was intensely porky, very soft, and perfectly tasty when rolled up in a soft corn tortilla with a squeeze of lime.

Service was a little slow, despite the restaurant being mostly empty, but I thought our server was otherwise lovely. The wait between courses allowed us to eavesdrop on the amusing conversation held by the loud people at the next table who insisted on pronounced "empanada" with a ñ so it sounded like "empiñata." Conjuring mental images of people using sticks to hit giant empanadas that rained picadillo upon them was an amusing way to pass the time.