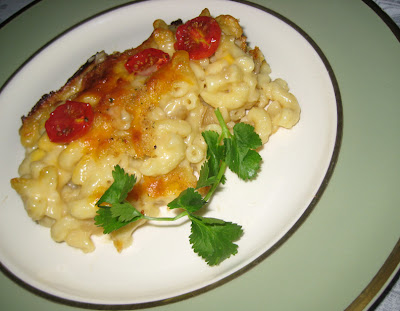 I have a confession. I grew up in a macaroni and cheese-free household.

Well, not entirely - my grandmother, who lived downstairs, often made Kraft Dinner for my Uncle Frank, and occasionally I'd snag a few forkfuls of it. I honestly don't have any memory of my own mother making mac and cheese before the mid-80s, by which time I was an adult.

Something changed in my mom after we moved from our apartment in Fells Point to bigger digs in north Baltimore. In the 70s and early 80s, she was all about the Shake 'n' Bake, Prego, and canned green beans. (Canned asparagus too. I didn't know the stuff even existed in a fresh state until the 80s.) From the mid-80s onward, however, she made tomato sauce from scratch and became rather adventurous in the kitchen. One dish she made fairly often was macaroni and cheese, which she usually threw together when there was a surplus of cheese in the fridge. (It happened more than occasionally. We are a family of cheese lovers.) Mom always baked it in a round glass casserole dish that had to be 14" in diameter, so it held a helluva lot of cheesy, carby, deliciousness. And between the three of us (Mom, my brother, and me), we usually ate about 3/4 of it before realizing we were pigs and putting the remainder in the fridge. If Dad was lucky, he got some. Maybe.

One of mom's innovations to the classic breadcrumb topping was to add thinly-sliced tomatoes as well. In the heat of the oven, they would dry out, become slightly chewy, and intensify in flavor, adding a little bit of fruity goodness to an otherwise completely guilty dish.

Mac and cheese doesn't have to be completely fat-tastic though. We only ever have 1% milk in our house, and that makes as fine a cream sauce as any. Reduced-fat cheese is ok to use too, just not the fat-free stuff because it won't melt properly. 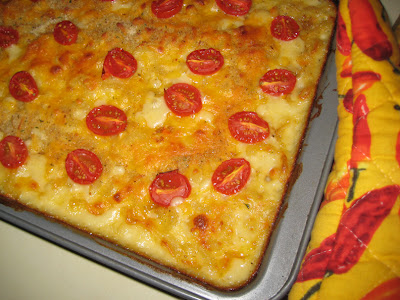 In a large saucepan over medium-low heat, cook the onion in a bit of olive oil and a pinch of salt until softened and light brown in color, about fifteen minutes. Remove onions to a bowl.

In a dutch oven full of boiling salted water, cook the pasta to al dente. Drain and return pasta back to the pot.

While the pasta is cooking, melt the butter in the pan used to cook the onions. Make a roux by adding the flour and whisking to make sure there are no lumps. Slowly whisk in the milk and bring to the boil. Turn down the heat (to prevent boil-overs) and cook for five minutes or so, until the mixture thickens and coats a spoon. Stir in the onion and about 3/4 of the cheese. Season with salt, pepper, and nutmeg. Pour over the macaroni in the dutch oven and stir well to combine. Put macaroni mixture into a 9 x 13 baking pan, and sprinkle with remaining cheese. Top with crumbs and sliced tomatoes.

Bake for 30-40 minutes until browned and bubbly.