Pee Wee takes the chefestants on a Big Adventure this week on Top Chef! When the five remaining chefs enter the Cordon Bleu kitchen, they find a table covered with stacks of what must be, according to Sarah, 80,000 pancakes. Padma, looking quite pretty for once this season (since she's gained a few pounds and is not wearing a romper, jumpsuit, sparkly pants, or yellow jeans), tells them that they will be cooking for a special guest...at which point none other than the somewhat elderly Pee Wee Herman comes in on his bicycle. 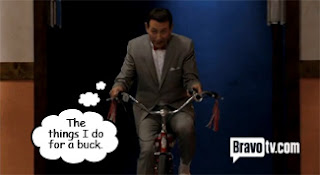 Ok, not "somewhat." Clearly Paul Rubens is too old for the Pee Wee schtick anymore. But it's his claim to fame, other than that unfortunate movie theatre incident. Back in the day, I was a fan of Pee Wee's Playhouse and all of its denizens. One year, a bunch of friends and I went to a Halloween party dressed as Pee Wee, Miss Yvonne, and the Flowers from the window box (man, I wish I had photos!) And I still try to watch Pee Wee's Playhouse Christmas Special every year. 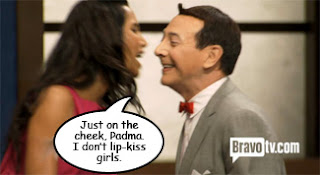 Anyhoo...Pee Wee tells them their challenge is to make him some creative pancakes in 20 minutes. The winner will get $5,000. So the chefs get to cooking. Since pancake making isn't the most exciting spectator sport, I'll spare you the bloody details. Soon 20 minutes is up and Padma and Pee Wee get to tasting. 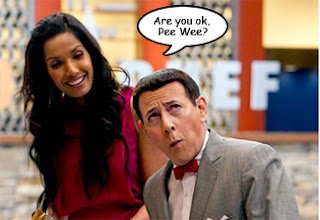 At every chef, he chews thoughtfully - so thoughtfully, it seems to some that he might be having a stroke - and declares it the "best pancakes he's ever eaten." Oddly, some of the chefs tell him that these are the first pancakes they've made. Really? Not even with Bisquick? And they call themselves chefs? 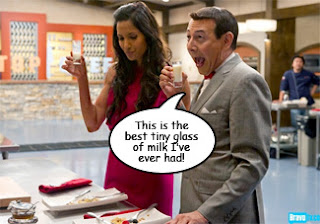 The pancakes that pleased Pee Wee the most were the ones that were most unique - Ed's crispy pancake bits with bruléed marshmallows and fruit. I think I want some of those now! Mostly because I haven't had breakfast yet.

For the Elimination Challenge, we get to share Pee Wee's bad memories of the Alamo. In the 1985 movie, Pee Wee's Big Adventure, his precious bike gets stolen; Pee Wee is told that it can be found in the basement of the Alamo. So he travels across the country only to find that...the Alamo has no basement! Twenty-seven years later (!), he's still quite bitter about the whole deal and intends to take out his anger on someone...anyone. Ed, Paul, Grayson, Sarah, and Lindsay will have to do.

So now he sends them on their own Big Adventure, complete with Pee Wee-style short-bus bikes with baskets and bells. They must individually source ingredients and find kitchens in which to cook them in order to prepare a family-style lunch to be served at the Alamo. All on bicycle. Well, the meal won't be served on a bicycle...

Before they set off on their journey, Pee Wee meets with the cheftestants to give them an idea of the sort of food he likes best. Basically, he eats everything, from Thai food to egg salad sandwiches. 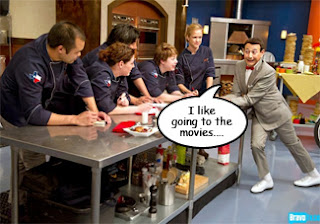 The next day, the cheftestants put on lots of sunscreen and bicycle helmets and go off wandering about town. They hit the farmer's market for ingredients first, with most folks picking up chicken or eggs or both. Lindsay gets beef cheeks but doesn't find a whole lot of other stuff she wants to use. Ed wants to use shrimp, but there's no shrimp at the market. He figures he can find it elsewhere. They chefs can also use their $100 budget to buy ingredients at the restaurants in which they cook. 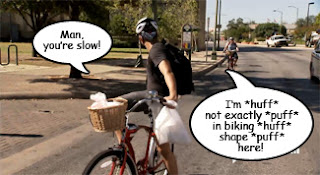 Off they pedal, looking somewhat like idiots. I think bicycle helmets look like Alien heads. Grayson beats Paul to a restaurant he wants to use for his home base. Ed finds a B&B that doesn't have shrimp, but it does have a willing kitchen and spare chicken in the fridge. Lindsay finds a kitchen at the Mad Hatter, but when she leaves to find other ingredients for her dish, Sarah usurps her spot. With half her cooking time wasted, Lindsay manages to find a kitchen to use. Her beef cheeks are slightly frozen, so she needs to get her ass in gear.

Meanwhile, Ed is undercooking his chicken slightly so it doesn't overcook on the long, hot bike ride to the Alamo. While he's in the kitchen, the B&B owners take advantage of his cheffiness and ask him to make some eggs for the guests. He obliges because even though he's a crank, he's also a nice guy. 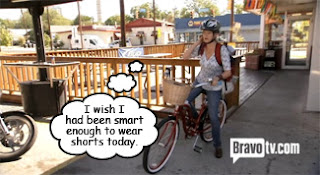 Grayson is making chicken stuffed with "spinage" and raw eggs. The aluminum pan she uses to transport the dish gets red hot, but it doesn't fit in her basket and she doesn't want the egg yolks to break and ooze out, so she bikes with one hand and holds the pan with the other. Unfortunately, Pee Wee didn't equip the bikes with pot holders.

Back at the Alamo, the chefs have only 15 minutes to reheat and plate their dishes. Apparently the Alamo doesn't have a basement, but it does have a kitchen and a dining room - who knew!

There are only four diners for this meal - Pee Wee, the long-lost Gail Simmons, Padma, and Tom. The chefs bring out their creations then scurry to hide in whichever room the Alamo lets them use to curse, smoke, and drink beer. All of them made pretty good dishes, but all had flaws. Sarah's egg salad with chicken skin vinaigrette was very tasty, but the eggs had not been seasoned. Lindsay's beef cheek-stuffed zucchini boats were fun, but her salad was a little limp and she used too much goat cheese. Ed's chicken was on the verge of being undercooked, with an odd texture that Pee Wee found unappealing. Paul's Thai-style chicken salad had a too-sweet gastrique that was balanced by sour pickles. And Tom was not exactly pleased with Grayson's decision to mix winter squash and tomatoes. And when Tom is displeased about something, well, watch out. 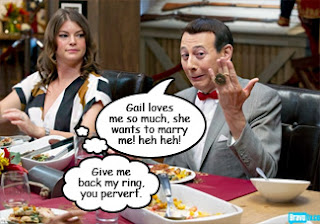 After the meal, they head over to the studio. Pee Wee tells Tom he should ride in the basket of his bike.Cheeky Pee Wee! Back at the stew room, Padma flounces in and morosely tells the cheftestants that their presence is needed in front of the firing squad. The judges give the chefs their good and bad points, and Lindsay is declared the winner, mostly because her dish was most "fun." Tom tells us that one of the first things he ever cooked as a kid was stuffed zucchini. So rah rah for fun childlike food! Paul is also deemed safe, leaving Sarah, Grayson, and Ed behind for more whining and complaints from Tom. 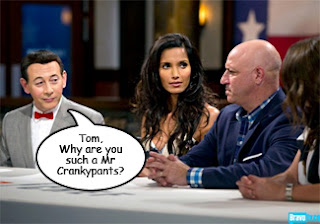 Once again it looks like Ed's going to be sent home, but instead it's Grayson who has to go face bulldog Beverly in Last Chance Kitchen. Indeed, at the end of the show, Padma comes in the stew room one more time to tell the chefs that the evening is not over yet. In front of the judges once more, the cheftestants find out about Last Chance Kitchen and watch a video montage of clips from the competition thus far. They seem baffled, excited, and horrified all at the same time. 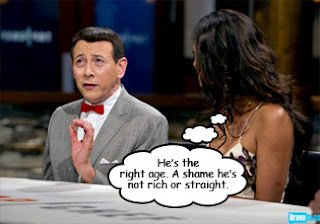 Next week: One chef returns. Paul seems to be crying about something. Final Five again!