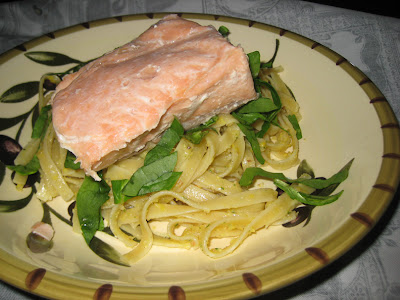 So I finally got the courage to cook a meat protein in the Sous Vide Supreme. While my initial experiments with eggs and vegetables were somewhat successful (and somewhat unsuccessful), I'm going to boldly declare that my experiment with salmon was mostly successful.

It's rare that we've managed to cook salmon properly at home. It's a fatty fish that shouldn't dry out easily, but somehow we either grossly over- or under-cook it. Conventional poaching has so far been the most successful cooking method we've tried, but I thought sous vide could be even better. Rather than just plop some salmon in a bag and have at it, I first did some research. I found this blog post regarding brine and cooking temperatures to be very interesting and inspiring. Apparently a brine prevents the excretion of albumen, that white fatty-looking stuff that oozes out of proteins like salmon and chicken breast during cooking. It's a fabulous idea, but I didn't really want to waste a cup and a half of kosher salt on cooking two pieces of salmon. It's just not cost effective. Why not just generously salt the meat ahead of time and rinse off the salt before cooking? Another thing I decided to change was the cooking temperature. While 50-53C seems to be the most popular suggestions, I cranked the machine up to 60C because I just don't like the flavor of raw salmon. Tuna, fine. Salmon, no. 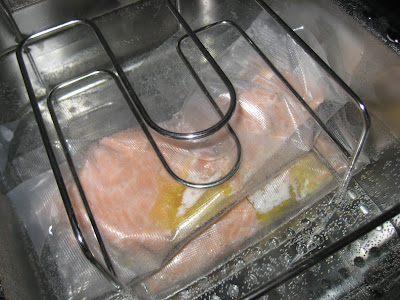 So...I bought two large salmon filets at the grocery store because they were on sale. After removing the skin and cutting each of them in half width-wise, I sprinkled about a teaspoon of coarse Kosher salt over both sides of each piece. After about 45 minutes, I rinsed off the salt, patted the fish dry, and vacuum-sealed the pieces in two bags with a tablespoon of butter in each. After a quick 25 minute bath in 60C water, the salmon was what I consider perfectly cooked. It was moist and flaky and had exactly the right amount of salt. Even two days later, after a couple minutes in the microwave to heat through, the leftovers were moist and juicy. My only issue with the fish was that it seemed to be extra, well, fishy in flavor. Perhaps because all of the meaty juices are retained in sous vide cooking; there's no other liquids to dilute the salmon's oils, nor are they burned off in cooking. Or perhaps this particular fish just had more flavor. In any case, it made me wonder if chicken breasts aren't the perfect protein for sous vide. If the process can keep them tasting as chicken-y as possible, that can only be a good thing, right?