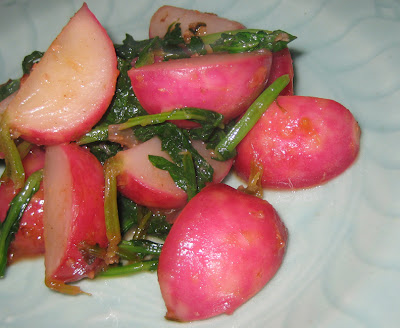 Radishes are a very underrated vegetable. Most people think they're just for salads or crudité platters, but I think they work best when cooked. That's right - I said cooked. We discovered cooked radishes back in 2005 and now consume them fairly often - far more often than we eat them raw.

January's Food & Wine magazine had a lovely recipe for sautéed radishes with orange butter, provided by Emeril Lagasse. The local Safeway just so happened to have bunches of big radishes with their greens attached, so Mr Minx used them to whip up a version of the recipe, substituting some bacon jam for the freshly cooked bacon, and using about half as much butter. The radishes themselves were a little bland (cooking them in chicken stock with onions gives them much more flavor), but the greens were outstanding! They were similar to collards, but required far less cooking, and were simply perfect in the orange/shallot/bacon sauce.

If you happen upon radishes with greens in your supermarket, I strongly recommend you try Emeril's recipe. If you can only find them in little bags, try the chicken stock recipe. While radishes taste a wee bit turnip-y, it's definitely turnip-y in a good way.