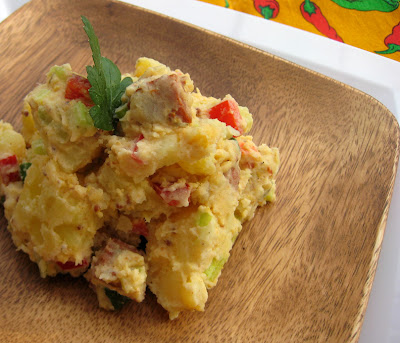 Potato salad seems so simple, right? Just potatoes, mayo, and celery, maybe some pickle relish. When I was a kid, occasionally potato salad meant that yellow-tinted stuff that dad brought home from the deli on Saturdays, along with Polish ham, Muenster cheese, and bologna for lunch during the week. While I like potato salad just fine, the deli stuff scared me. For one thing, the potatoes were usually undercooked and crunchy, and for another - why was it yellow? I much preferred home-made potato salad, especially if my Grandma was doing the cooking. Her salad was simplicity itself: new potatoes cooked until tender in salted water, sour cream, and lots of chopped scallions. I was usually happy to consider it a meal in itself.

Sometimes when I make potato salad at home, I make it Grandma-style, but it's never quite the same. More often than not, I like to mix it up. Not long ago, after bringing home a muffuletta sandwich from my favorite Cajun restaurant, I decided it needed a side of potato salad. Cajun-style potato salad, with not only celery but also bell pepper and onion (the "Trinity"), Andouille sausage, and lots of grainy Creole mustard. And to make it yellow (because sometimes it just seems right), I used some lovely Idaho® Yukon Gold potatoes.

Cook potatoes in boiling, salted water until tender, about 8-10 minutes. Drain well and allow to cool to room temperature.

Heat a small sauté pan and add a teaspoon or so of olive oil. Cook sausage, stirring frequently until it begins to brown on the edges. Remove from heat and allow to cool.

In a small bowl, stir together mayonnaise, Creole mustard, Cajun seasoning, and optional hot sauce until well blended. If the sauce seems a little thick, add a few tablespoons of cream and stir well.

When potatoes are cool, place them in a large bowl and add cooked andouille sausage and all of the vegetables. Fold in mayonnaise mixture. Season to taste with salt and pepper.

Before serving, refrigerate salad for an hour or two to allow flavors to marry. Makes about 2 quarts of potato salad.

This post was sponsored by the Idaho® Potato Commission. Minxeats has been compensated for recipe creation and posting.