Woo hoo! Our long national nightmare Top Chef season 9 is finally over! I got mah cowboy boots on and I'm doin' a Texas-style happy dance! :::clomp, clomp, stomp, clomp::: I'm not happy, of course, that the Bravo site not only isn't offering show shots again this week, but also doesn't have a whole lot else available right now, other than an announcement about the winner.

However, the person who won was the right person, so I'm going to allow myself to be content with that.

The curtain opens at the end of the last episode, when Lindsay is told to get her pasty little ass back to Michelle Bernstein's kitchen because Sarah and Paul are the only two chefs who will be competing in the "real" finale. Padma tells the Final Two that they will be preparing a four course tasting menu and serving it in their own restaurant. Well, a borrowed facsimile, that is - either one of two Vancouver restaurants, Black & Blue or Coast.

Cut to the interior of a rather large kitchen. Padma is there with a bunch of people dressed as chefs. Ah! They are chefs...former cheftestants to be exact - Jor-El, Keith, Grayson, Handsome Chris, Superbitch, and Nyesha. Where the hell is Beverly? And my man Ed? In their place are three of the umpteen who didn't even make it to the competition - hippie-dippy vegetarian Colin, gotta-please-my-MIL Ashley, and that cocky douche who originally introduced himself as, "Stone. Tyler Stone." God, I hope Sarah gets stuck with him. Tht would be even better than having to work with Beverly. Two big-time chefs - Marco Canora (who missed being the Next Iron Chef by thismuch a couple seasons back) and Barbara Lynch - are also there. This motley crew is competing to become sous chefs for Paul and Sarah; each of them prepares a single dish which is placed - unlabled - on a table. After this is done, Paul and Sarah enter the kitchen to taste the dishes, choosing their four favorites. 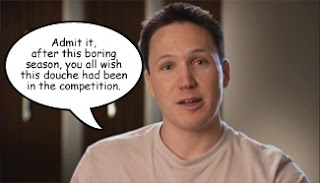 Sarah immediately declares that StoneTylerStone will not be allowed to butcher anything! Grayson laughs but you know she's not finding it particularly funny. Doucheboy better stay out of her way when she's got a knife in her hand. 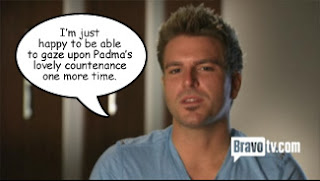 The teams will have menu-planning, shopping, and six hours of prep today, and three more hours to complete their dishes before service tomorrow. Immediately StoneTylerStone starts putting in his .0005 cents by suggesting that Sarah use the sous vide machine. She says she's not comfortable with it, and would rather cook her food in the traditional manner. Come on, Sarah - GO FOR IT!

(Remember what happened to the last person who tried sous vide for the first time in a finale? That's right - Carla Hall listened to her bitch of a sous-chef Casey Thompson and ended up losing the whole shebang.)

GO FOR IT, SARAH!

But she stays firm. No sous vide for Sarah. Damn. 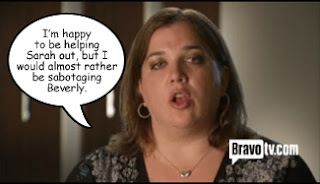 Her crew is working at Black & Blue; she's chosen to serve a squid ink pasta course, followed by trout with a pumpernickel crust, veal cheeks and sweetbreads, and a hazelnut cake. Paul's taking over Coast and there he's offering chawanmushi with spot prawns, loup de mer with mushrooms, congee with eggs and uni, and a coconut ice cream dessert.

But first...we have the obligatory plug for sponsor Terlato wines. Sarah and Paul are forced to do a "tasting" with Tom and Emeril, and I can only imagine how awkward that was. The segment is mercifully brief, as Bravo obviously cut out all of the good parts.


Tom: I'm sorry, guys, but Terlato is a sponsor. We have to do this.
Emeril: We promise not to judge your food on its inability to match well with this swill.
Tom, pouring wine: Try this Chardonnay first and tell me what you think.
Paul spews wine all over Sarah.
Sarah: AAAAAHHHHH! It tastes...oaky? No...more like gym lockery. And like old fish.
Emeril: I get poison sumac. And a bit of Shar Pei.

The next day, the chefs finalize their work. StoneTylerStone  - who, I just realized, is dressed like an evil dentist - has been a huge pain the whole time. Grayson in particular seems annoyed. She tells us that the girls will "jam out with their clams out," (and this is why we should be thankful that chefs wear pants and aprons, for both safety and hygienic reasons) while StoneTylerStone does his own thang. Which just so happens to be chopping celery, the only thing Sarah trusts him to do. 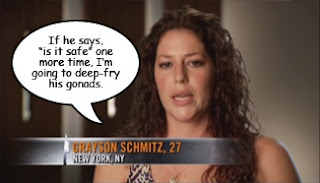 Meanwhile, in the dining rooms, we see that the judges are split up in two groups so they can dine in both restaurants simultaneously. Gail, Marco Canora, Tom, Cat Cora, and Mark McEwan of Top Chef Canada hit up Paul's restaurant, Qi, first, while Padma, Hugh, Emeril, Bill Terlato, and completely random chef David Myers start at Sarah's Monte Verde. Unbeknownst to the cheftestants, their families are also partaking of the meal, which makes both Paul and Sarah cry tears of joy when they later find out.

There are lots of good things said about both meals, and a couple of negative comments. Sarah used raw beets. Paul's congee didn't thrill Tom. Both desserts were terrific. The judges switch restaurants, which gives Sarah an opportunity to fine tune her lumpy polenta and for Keith to overcook Paul's final batch of chawanmushi. Sarah's fiancé also finds a bone in his portion of trout, which sends Sarah into a tizzy. But in the end, everything is fine.

Everyone retires to the Olympic Village for the final judging. Sarah and Paul get to chill out in the deluxe tour bus they stewed in last week while the judges deliberate. Finally, they are brought out to applause from their families and their former competitors who either helped them cook or tasted the food. Tom turns into Pee Wee Herman for a moment and tells Sarah and Paul that this meal was the best finale meal EVAR, and nobody believes him. And then the tense music starts up...it's time for the big announcement.

During the last commercial break, we discovered that that 88% of the 68 Bravo viewers who are still watching Top Chef Texas after 17 episodes think Paul should win.

And, thankfully - he does. There is justice in this world. Paul was the strongest chef this season, he won the most challenges and the most money and prizes. His victory somewhat makes up for Stefan Richter's loss in season 5 and Kevin Sbraga's win in season 7. Somewhat. Unfortunately, nothing will make up for Gretchen's win in Project Runway season 8.

Next week...reunion time! And then no more Top Chef until probably late summer.