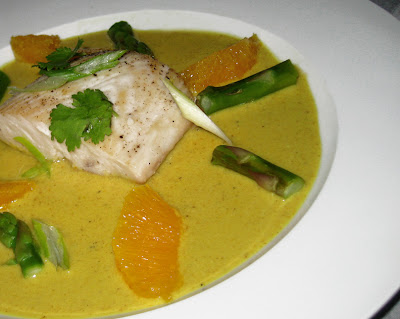 The recipes on Top Chef are often so complicated that it's difficult for the home cook to recreate them exactly. I tend to take liberties with just about every recipe I encounter anyway, so it made sense for me to tinker with this recipe, too.

The whole reason I decided to try the dish that won Sarah Grueneberg a Quickfire Challenge in the Top Chef Texas finale was because I happened to have fish, coconut milk, and shallots in the house. There was also a lone orange in the fridge. As I started cooking the dish, I decided that the rather mild-seeming coconut sauce could use a little more zip, so I dug through the cupboard for my little baggie of vadouvan, a type of curry seasoning that I first heard about when Jamie Lauren used it to spice a carrot purée way back on Top Chef season five. With the addition of the vadouvan, I could hold back on the excessive amount of turmeric (4 tablespoons!) called for in the recipe, and I also halved the amount of coriander. And since I had to peel the orange that would essentially be a garnish, I tossed a strip of it into the sauce to add extra flavor.

Needless to say, I did not have a Dungeness crab hanging around (this is Maryland! Such alien creatures are not allowed!), nor did I have any other crustaceans on hand, so I skipped the crab salad part. Now that I look back on my recap for that particular episode, I see that the judges felt this dish needed more acid; even if I couldn't make the salad, I should have added a squirt of lime or two. The finished dish was a bit on the mild side, although it was quite tasty. And, surprisingly, easy to prepare.

With a vegetable peeler, cut a 1" x 3" long piece of orange rind, scraping off the pith if necessary, and set aside. Peel the rest of the orange and cut into supremes. Set aside.

In a medium sauce pot, heat 1 tablespoon of olive oil, add ginger, shallots, and coriander stems and sweat for 10 minutes. Then stir in turmeric, coriander, and vadouvan. Top with coconut milk, add strip of orange peel, and simmer on low for 10 minutes, strain and set aside. Season to taste with salt and pepper.

In a medium pan, heat 4 tablespoons olive oil over medium heat. Season mahi with salt and pepper. Cook fish on both sides a total of 8 minutes, finish the pan with butter.

Place a pool of coconut sauce on a plate, place fish on top. Scatter asparagus and orange segments around the plate. Garnish with green onion and cilantro.