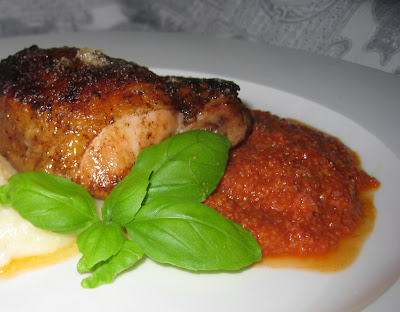 During the Top Chef All-Stars finale, chef Mike Isabella produced a sauce that had judge Gail Simmons swooning. "Pepperoni sauce" was all she murmured for the last 20 minutes of the episode. With such a glowing endorsement, how could I not give it a try (despite the fact that Isabella lost the challenge and the competition)?

He served it with chicken, as did I: Top Chef Masters cheftestant Suvir Saran's lemon chicken, without the lemon (and with very little salt). Plain boring chicken breast, cooked sous vide, poached, or pounded thin and sautéed quickly, would benefit from a couple of tablespoons of Isabella's concoction, as would pork tenderloin or a bowl of pasta. The sauce is spicy, salty, and tangy--a little goes a long way.

Isabella's original recipe calls for six tablespoons of olive oil. It seems that most prominent Italian chefs like to drown their food in olive oil (I'm pretty sure Mario Batali even cooks bacon in it), but since pepperoni is such a fatty product, I figured one tablespoon to cook the onions would be more than enough. And it was--I skimmed off about 2/3 cup of liquid fat before I dumped the cooked sauce into the food processor. (That luscious dark red grease did not get wasted...it made a very nice vinaigrette when whisked with a bit of balsamic vinegar, honey, and Dijon mustard.)

Toast the fennel seed in a small dry skillet over medium heat, shaking the skillet often to keep the seeds from burning. They will become fragrant and slightly darker in color. Remove from pan and set aside.

Heat the oil in a large, heavy-bottomed pot over medium heat, until the oil shimmers. Add the onion and garlic; cook for 5 to 10 minutes, stirring often, until they are golden and fragrant. Stir in the pepperoni; cook for about 5 minutes, until fragrant and evenly coated, then add the toasted fennel seed and crushed red pepper flakes. Cook for 1 minute, stirring. Add the tomatoes and their juices, the broth, and the bay leaf; stir to incorporate. Bring to a boil, then lower heat so the mixture is simmering. Cook for 45 minutes until the pepperoni softens. Remove from heat. 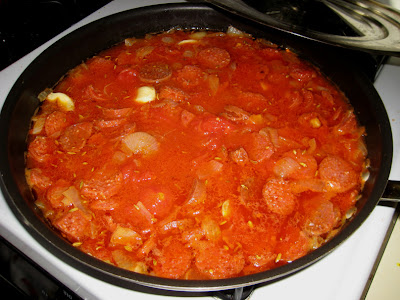 Skim sauce with a tablespoon. Discard fat, or save for other use. (Make vinaigrette!) 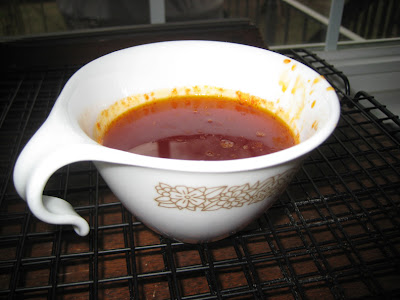 Working in batches as needed, transfer to a food processor or a high-powered blender (including the bay leaf). Puree until smooth. Cover and refrigerate until very cold, to remove additional fat. When ready to use sauce, remove fat and reheat sauce.

After skimming, I had a quart of sauce. If you don't skim, you'll have more.