A Twist on B'stilla 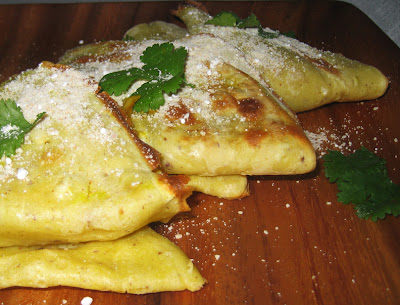 My mother, after many childhood hours spent reading the adventures of Richard Halliburton, was quite the armchair traveler. Her favorite among his reminiscences of travels to exotic locales like India and Timbuktu were passages on visits to dusty, spice-filled Morocco, and she liked to pretend she was with him on the journey, perhaps riding by his side on a flying carpet.

Around the mid-70s, Mom started exhibiting symptoms of the RA that slowly crippled her, ending any dreams she had of traveling around the world. It was a trip to DC to see a new doctor about a new treatment that enabled her to visit a little piece of Morocco in the form of the restaurant called Marrakesh. There, with our hands, we ate delicious things like roasted chicken with lemon and olives, couscous, and b'stilla - a pie made with a filo-like dough, chicken, eggs, and almonds, and dusted with powdered sugar. It was one of the most intriguing and delicious things I had ever eaten up to that point and I attempted to recreate it at home with various unsuccessful results. Eventually, I forgot about it.

Then Mr Minx and I were invited to a press dinner at a new restaurant called Tangier's. (Yes, misplaced apostrophe and all.) I was excited to see b'stilla on their menu, but was rather disappointed to find that their version was like a Moroccan eggroll. It was just ok, maybe a bit too cinnamon-y and gritty with ground almonds. I briefly thought to re-attempt making a more authentic version, but really didn't want to deal with filo. The pastry is fragile, and dries out quickly. Ideally, filo should lounge under a damp tea towel while the cook works with it, but that takes up more counter space than I can afford to lose. The idea was soon discarded.

Then, last Fall, I was again reminded of b'stilla while eating the chicken-liver-and-walnut filled crespelle I had concocted. My first thought was that dish might be interesting with a dusting of powdered sugar, and then it hit me: why not make a stacked crepe thing with a b'stilla-like filling? Or easier still - individual crepes filled with shredded chicken and almonds. B'stilla also contains scrambled eggs, and crespelle are quite eggy, so could I use them to kill two birds with one stone?

The answer is "yes." The resulting dish wasn't as crisp and buttery as the real thing, but it definitely had all the right flavors.

While Crepe B'Stilla has several steps, none of them are particularly difficult. Don't be afraid of making crepes - they are really quite easy. The rather eggy batter makes them pretty resilient. You might mess up the first one, but the rest should come off well (at least that's my experience). I grease the pan before making the first crepe, but not for subsequent crepes. Your mileage may vary.

In a large sauté pan, heat the olive oil over medium heat and add onions. Cook onions, stirring occasionally, until they turn translucent. Lower the heat, stir in spices, and cook for an additional 10 minutes until onions start to caramelize. Add chicken and stock and cover pan. Cook for about 45 minutes at a low simmer until chicken is very tender and most of the stock has evaporated. (However, the mixture should not be completely dry. If stock seems to be evaporating too quickly, add more.) Remove from heat. When cooled, remove chicken bones and tear meat into large shreds. Remove and discard cinnamon sticks. Store in a covered container in the fridge until ready to use.

Wipe out the sauté pan used for the chicken and melt butter over medium-high heat. When melted, add almonds. Cook nuts until they turn golden brown, stirring constantly to make sure they do not burn. Remove from heat and set them aside to cool. When completely cool, pulverize them in a food processor. In a bowl, mix nut powder with powdered sugar and set aside.

Put flour in a large mixing bowl and slowly drizzle in the milk, stirring constantly to avoid making lumps. Whisk in eggs one at a time until a thin batter is formed. Add salt and let stand 20 minutes. Spray non-stick 12" skillet or pancake griddle with cooking spray and heat over medium heat until hot (but not smoking). Add 3 or so tablespoons of batter to the pan, spreading it quickly with the back of a spoon or ladle to make a round about 8" in diameter. Cook until crepes are set (top will look dry), about 30 seconds. Remove from pan and place on plate. Stack subsequent crepes on top. Repeat until batter is gone. Cover with plastic wrap and refrigerate until ready to use.

Makes 8-10 crepes, depending on how many got messed up during the cooking process :)

Place oven rack about 8-10" below broiler and preheat broiler.

Place about two tablespoons of shredded chicken on one quadrant of a crepe. Top with a generous sprinkle of almond sugar mixture. Fold crepe in half and then half again to form a triangle. Place on a parchment-lined baking sheet. Repeat until all crepes and chicken are used up. There should still be some almond/sugar mixture left. 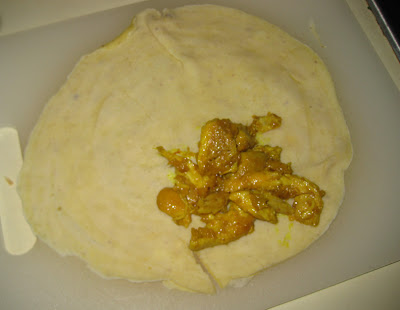 Place pan in oven and heat for 15-20 minutes, until crepes start to crisp up, turning them halfway through to crisp on both sides. Remove from oven and sprinkle with some of the remaining almond/sugar mixture. Garnish with cilantro. 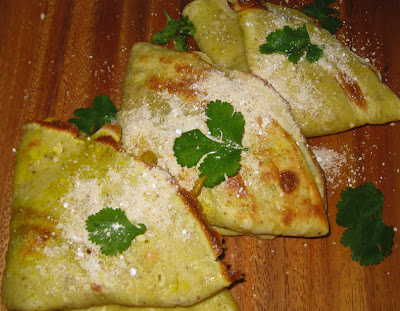