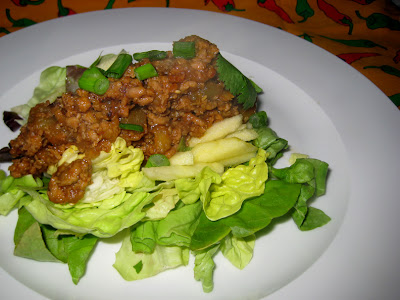 With Healthy Choice providing the big money prize for this year's Top Chef Texas winner, it was no surprise that there would be a challenge involving healthy food at some point during the season. For this particular Elimination Challenge, the cheftestants had to make a healthy version of a dish suitable to serve at a block party (yeah, I don't know what that would be, either). Chefs Ed Lee and Paul Qui did riffs on the Korean dish, kalbi. While Ed pretty much stuck to beefy tradition, Paul chose to use ground turkey, which is lower in fat. To mimic the fatty mouthfeel of perfectly-cooked beef shortribs, he added diced eggplant, which was nothing short of brilliant. In addition to the meat component of his dish, Paul made hot sauce, white peach kimchi, and a yogurt topping.

While all well and good, the accompaniments seemed a bit excessive for my simple dinner for two, so I skipped them entirely. I also changed the quantities in the original recipe quite a bit. The gochujang I used was so fiery, if I had used an entire half cup PLUS an additional 1/4 cup of sambal oelek, I might have caused internal bleeding. I also thought a full 1/4 cup of sesame seeds might make the dish seem gritty. It didn't make sense for me to buy a half gallon of apple cider for the mere 1/4 cup called for in the recipe, so that ingredient got skipped altogether. It was replaced with a simple salad of Fuji apple matchsticks dressed in a squeeze of lime juice.

Despite all of my changes, the dish was pretty amazing - sweet, fragrant, and spicy. The little chunks of eggplant did indeed seem like bits of fatty goodness and is a trick I'm inclined to use in other ground-meat-based dishes. Sloppy Joe comes to mind. How about meatballs?

Here's my version of Paul's recipe. I'm definitely going to make it again. It was pretty simple, and I think it could be a great party dish, served either with slider rolls or lettuce leaves.

Turkey Kalbi (adapted from a recipe by Paul Qui)

Add ground turkey. Mix in agave syrup and gochujang. Cook on medium heat until ground turkey is cooked. Season with salt to taste.