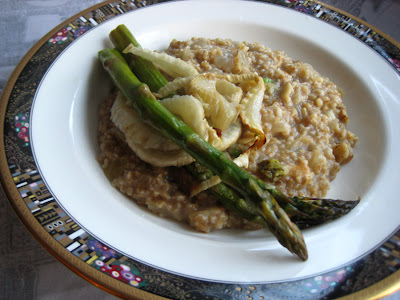 I used to hate oatmeal. Hate it. I didn't much see the point of eating sweetened wallpaper paste, so I avoided the stuff. Then I discovered steel cut oats. They have a completely different texture from rolled oats and while they soften (a bit! not entirely!) when cooked and form a goopy porridge, I don't find it to be at all unpleasant. What I do find unpleasant, however, is the long cooking time and the fact that it tends to boil over a bit, even when I make it in a rice cooker.

While I have issues with hot oatmeal, I've always loved cold oatmeal - aka muesli. While the oats soften in cold milk, they never achieve the gluey texture I dislike so much. Eventually I realized that the reason for this is because the oats in muesli - once combined with milk, spices, dried fruit, and nuts - remain undisturbed. That is, there's no stirring. So I tried that trick with cooked oatmeal - I brought salted water to a boil, added rolled oats, and turned of the heat. After 10 minutes or so, the oats had absorbed all of the water, became soft, but didn't release any of their yucky mucilage. With a little brown sugar and cinnamon, or a spoonful of Nutella - yum. It's what's for breakfast just about every weekend.

Now that I'd figured out how to make fast oatmeal I actually enjoy, the can of steel cut oats became neglected. That is, until I decided that starchy oats might work in a risotto-type preparation. I cooked them up exactly the same way, first toasting the grain in a combination of olive oil and onion, then adding stock a bit at a time. The end result, while not an exact replica of risotto, was very very good, and a nice change of pace.

Preheat oven to 400F. Place vegetables into a foil-lined 9 x 13 baking dish. Drizzle with about 2 tablespoons of olive oil and a generous pinch of salt and toss vegetables to coat. Place pan in oven and roast for 60 - 90 minutes until all vegetables are tender and caramelized. Every 15-20 minutes, use tongs to rearrange vegetables (move ones on the bottom to the top). As vegetables become cooked, remove them from pan and set aside (for example, asparagus will be cooked after 30 minutes or so).

About 30 minutes before veg are finished, place chicken stock in a sauce pan and bring to a simmer.

In a large skillet or sauté pan set over medium heat, cook onion in 2 tablespoons of olive oil until onion is translucent. Add oats and stir to coat with oil. Cook, stirring frequently, until oats start to smell toasty, 4-5 minutes. Turn heat up to medium-high, add a ladle-full of simmering stock to the oats and stir until most of the stock has been absorbed. Proceed as for risotto, adding a ladle of stock at a time and stirring frequently until stock is absorbed. After about 15 minutes of cooking and stirring, the oats will not have any more starch to release, so you can start adding stock by the cupful and covering the pan. By the time all of the stock has been added and most of it absorbed, the texture of the oats should be tender with a slight chew. At this point, stir in a couple tablespoons of Parmesan and the butter.

Ladle oats into a shallow bowl and top with a portion of the roasted vegetables.