A recent batch of U.S. Junk Mail included a menu for a new sushi restaurant in Roland Park called Yama. You can't swing a cat in North Baltimore without hitting a sushi joint...so it's a good thing cats like fish. :) Fortunately, we love sushi and decided to check it out.

The restaurant is in a long narrow space in the former Super Fresh-cum-Fresh Green soon-to-be Giant shopping center on 41st Street between Roland Avenue and Falls Road. The walls are a dark orange and the lighting is sparse, so it's vaguely gloomy inside, particularly on a rainy night, but don't let that stop you - the sushi is good - and reasonably priced.

As per usual in a sushi restaurant, our eyes are far bigger than our stomachs (which are pretty big) and we ordered far too much food. Thankfully the portions at Yama are Japanese-sized, meaning we didn't have to do battle with giant American-sized rolls and slabs of fish.

While we waited for our vegetable tempura and miso soup, our waitress brought us tiny dishes of marinated cucumbers. I've never had an amuse in a sushi restaurant, and thought this was a nice touch. 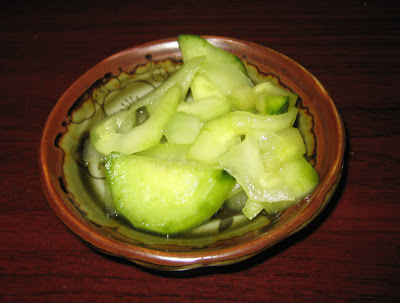 We enjoyed the miso soup, which was a bit more flavorful than most, and the vegetable tempura, which was nicely crisp and came with a mildly-sweet soy-based dipping sauce. 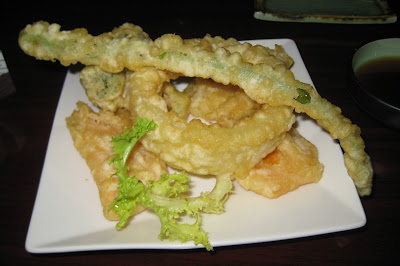 Then came the very fresh sushi. First some nigiri...

...and then a platter of rolls. We ordered four rolls, two fancy ones and two that were more simple. And as if we didn't already have too much food, the restaurant included a fancy roll on the house.

The spicy scallop roll - the favorite of the night - was a simple preparation of chopped raw scallop flavored with a bit of Sriracha and wrapped inside-out. The "Super Duper" roll contained grilled salmon, eel, and avocado. I think it would have worked better without the addition of eel sauce, which made the nori a bit soggy. Another favorite, the "Spicy Girl," contained shrimp tempura and crab stick and was topped with spicy tuna. The "Pearl" was a little more involved, with fried oyster, cream cheese, avocado, and crab stick on the inside, and tobiko and shrimp on top. Unfortunately, the cream cheese overpowered the rest of the ingredients, but the roll did have a nice crunch from the oyster. We also enjoyed the complimentary "Salad" roll, which contained shrimp tempura, white tuna, red snapper, and crab stick, topped with seaweed salad. 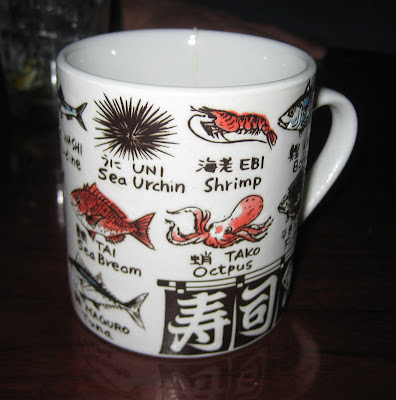 We ordered green tea to wash everything down. Tea bags always annoy me, but I couldn't be too upset because the mugs were absolutely darling. As was the service.

We used a $5 coupon that came with the mailing, so our dinner was only $57 - not bad at all. We'll definitely be back.