We had our annual cookie-fest at Casa Minx in the week before Christmas, making the usual chocolate chippers and snickerdoodles, plus a batch of white chocolate/dried cherry cookies from a recipe I had obtained from a friend. (You can find that recipe in the December Minxeats Newsletter. Don't get the newsletter? Then click here to subscribe!) After giving many of them to my brother and eating still more of them for Christmas dessert, by mid-January, we were in a sad state of affairs as far as our cookie inventory was concerned. Since I recently had a nice long weekend thanks to Martin Luther King, Jr., I thought it might be nice to put one of those days aside for baking.

A while back, I had bookmarked a recipe for Red Velvet cookies because: 1) Mr Minx likes Red Velvet cake; 2) they seemed so easy. Honestly, I should know better than to use boxed cake mix, especially cake mix that contains a quantity of red food dye. The cookies came out looking like a sunburnt version of Thing and tasted like, I dunno...propylene glycol, polyglycerol esters of fatty acids, and monocalcium phosphate. 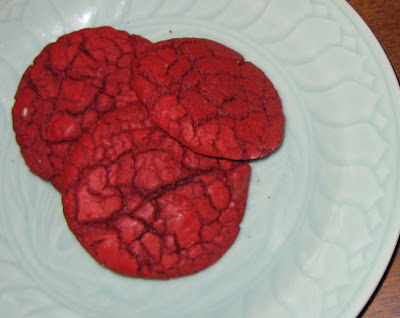 The bar cookies I'm going to call Reconstructed Florentines came out much better. I figured Florentines were a tasty way of using up candied orange peel left over from making fruitcakes, but I didn't want to deal with the potentially messy chocolate-coated classic version of the cookie. The bar cookie version was nearly perfect, except that I think they would be better with a crisper crust (mine was more like cake). I also varied the recipe by omitting the cherries and using almond flour in place of the chopped almonds (because that's what I had on hand). 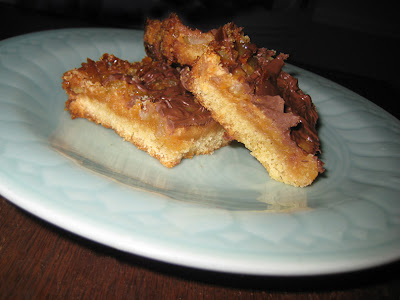 Finally, because Mr Minx is not a big fan of candied orange peel, we baked a third cookie, this time a variation of Milk Bar's Christina Tosi's cornflake chocolate chip marshmallow cookies. We didn't have marshmallows, nor was I about to whip up a batch of "cornflake crunch," so we omitted the former and just used handfuls of plain cornflakes for the latter.

Despite chilling the dough for the required one hour before baking, we had some issues with the resulting cookie. They weren't quite the same flat puddles as the last time I tried a Milk Bar cookie recipe - they were super crispy, somewhat brittle this time - but they were still too flat. Tasted fine though, with a sort of brown-butter-ish note. 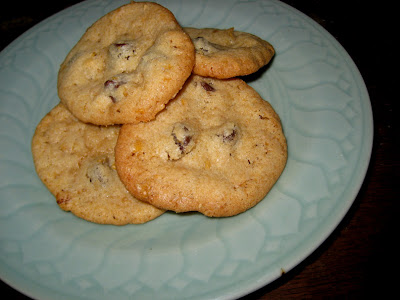 I think the problem is that the sugar/butter-to-flour ratios on these cookies are way off from proportions that usually work for me. Compare Tosi's recipe to the classic Nestlé Toll House recipe: both require one cup of butter, but Tosi's calls for a bit more sugar and 3/4 cup less flour. Next time, I need to remember to use more flour to get a crunchier, heartier cookie.