Call me crazy, but I think this show might be a trainwreck worth recapping.

There are only eight contestants, each of which are "celebrities." In this day and age, that can mean anything, from Kardashians to talking dogs. Personally, I'd prefer talking dogs to just about any one of these people: Olympic gold medalist Summer Sanders; actor Lou Diamond Phillips; 'N Stync'er Joey FatOne; singer and plastic surgery freak Taylor Dayne; weirdo Coolio; and comedian Cheech Marin. Inexplicably, the competition also features two scrawny people who possibly suffer from eating disorders - Alyssa Campanella, current Miss USA, and a guy who I only know as someone vaguely associated with Paris Hilton, but I'm told he's a singer, Aaron Carter. These two are super skinny - you can't convince me that either of them takes nutrition orally. And Carter looks like a douchebag on top of it. 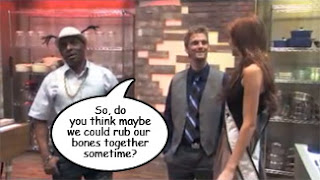 The show starts with each "celeb" wandering onto the set, oohing and aahing, according to the script. Cheech Marin is first, followed by 21-year-old Alyssa. I guarantee she has no freaking clue who Cheech is. She does know FatOne, who oozes in next. Dayne comes in, introducing herself as a very talented singer. Apparently she's quite modest, too. Coolio enters the room, and he's either got to pee or has an infection or something, because he keeps grabbing his crotch. I hope he washes his hands before starting to cook. 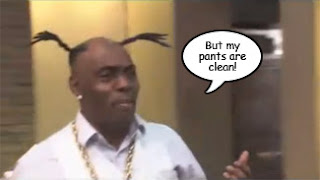 Finally, two of the three most obnoxious personalities on the Food Network walk in - Rachael Ray and Guy Fieri. 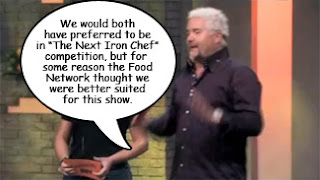 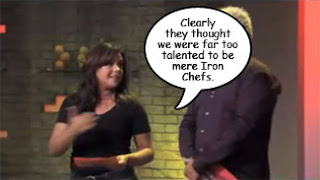 You know, I think if Paula Deen were there, too, I'd change the channel and be done with it. Rachael and Guy pretend to be impressed by the celebs and get to picking teams after a quick round of Rock Paper Scissors, as suggested by the always-mature, 40-something Guy Fieri. Guy wins and chooses nutjob Coolio first. You know Guy's thinking that by contrast he's going to come out looking absolutely elegant and sophisticated.

Taylor is obviously picked last because nobody wants to take the risk of having her lip implants explode and leak toxic chemicals into the food.

The challenge for this episode is to cater the first non-annual "Celebrity" Cook-Off Food "Festival," held in some remote place near Trenton, NJ. Each celeb is responsible for one food item that will feed 150 people. The teams go off to work out their menu, with the help of their "mentors," Rach and Guy. Basically Rach and Guy tell each team member what to do, except for Lou and Cheech, who already have dishes in mind. I predict that these two will be the last men standing, with Lou coming out the winner.

Anyhoo...Rachel gives her team the theme "Hot in the City," and Guy wants his to cook Mexican-ish food, with the theme, "Fiesta Loco." Sounds about right. In addition to food, each team has to provide entertainment to the crowd. The audience will then vote, and the team that is awarded the most tokens is the winner. The two worst performers from the losing team will have to duke it out in a separate challenge to determine who is going home.

During the 30 minutes of prep, we find that Aaron is a real moron. Rachel has assigned to him a pasta salad with Ranch dressing and grilled jalapenos that she insists will taste like jalapeno poppers. I'm not sure where the macaroni and Ranch dressing comes into play in a dish of jalapeno poppers, but she's the "expert" so I'll take her word for it. [eyeroll] Aaron is distressed when he discovers that he has to make the dressing from scratch - he doesn't even get to use the little package of Hidden Valley seasonings! So he mixes sour cream, bottled Thousand Island, some hot sauce, and who knows what else. Definitely saliva and tears. He's pretty sure the end result is awful, but he makes sure by giving Summer some to taste. She gags, and he wisely takes that as a clue to start over again. 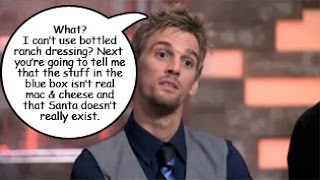 The next day, the gang heads to a remote pier at the end of nowhere to finish cooking for their "Food Festival." 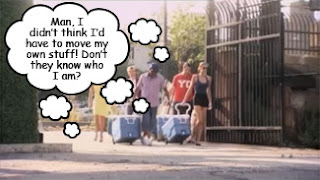 Guy and Rachel come around to make sure everything is ready and give pointers to their celebs. Guy suggests that FatOne might have too much seasoning rub on his shrimp, and that Alyssa's ice cream might stay colder if she filled chafing dishes with ice and packed her servings into them. FatOne listens, but Alyssa thinks she knows better. Rachael doesn't gag at Aaron's salad, but she seems to have a perpetual "eww" expression on her face the whole time she's inspecting her team. She tells Lou that his ribs smell awesome, but she looks skeptical. And perhaps a bit scared of him.

Not soon enough, time's up and the 150 "festival" attendees crowd into camera range and rush the tables to sample food. They all seem to adore Lou Diamond's "turbo" ribs, which he marinated in veggies and salsa, boiled in the marinade, then finished on the grill. 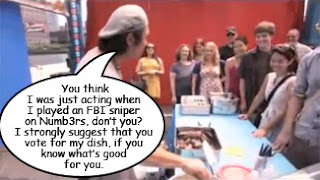 Cheech's beef machaca rolled in tortillas is also a big hit. Surprisingly, Coolio's tilapia and bean tacos are also well-received. Of course, Alyssa's ice cream has melted, but she passes her Mexican bananas foster off as a milkshake instead; Summer's corn does pretty well, as does FatOne's shrimp. But Aaron's salad is bland, and Taylor's gazpacho shots, conversely, are too spicy. 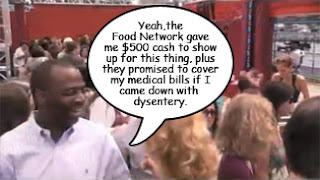 Just when you think it's over, there's "entertainment." First Aaron and Taylor "sing." He's completely awful - did he really have a professional career? - but the crowd is probably too drunk off the tequila in Alyssa's bananas foster to care. Team Guy is smarter, avoiding the song and dance and instead bringing out a pinata and giving away kisses from FatOne and Miss USA.

Eventually, the crowd is shooed away and Rach and Guy dole out the verdict. Lou's ribs were unanimously voted to be the best dish of the day. Guy then tells Cheech that his sliders were also very good. Only Cheech didn't make sliders - he made shredded beef wrapped in tortillas. Guy was apparently hitting Miss USA's tequila milkshakes a bit too hard.

While the voting was close - the winner and loser separated by 14 votes - Team Guy takes the victory. That means two from Team Rachael are on the chopping block. Summer's corn dish is safe, leaving bland Aaron and spicy Taylor to duke it out. Now, each of them must create a dish in 10 minutes using a "mystery menu item," which turns out to be shrimp. How boring! Wouldn't it have been more fun to see their reaction to raw squid? or Buddha's hand? or huitlacoche? Both decide to make boring shrimp/garlic/pasta dishes, which are then served to Guy and Rachael in a blind taste test. After hemming and hawing about how one dish needed more herbs and the other needed more something, they choose Taylor's dish as the winner and give Aaron the well-deserved boot.

So...should I bother recapping for the next couple of weeks? The Food Network doesn't even seem to care about the show, since they don't have any recap videos up on their site. Do you care? Did anyone watch?