Before I talk about the restaurant itself, I have a funny story to tell you. Ok, maybe it's not so funny, but I'm going to tell you anyway.

Back in the late 90s, a friend was visiting from Texas. We ended up at the Reisterstown branch of Bill Bateman's Bistro, which happened to be a hang-out for Baltimore Ravens players. As we sat and chatted at the bar, we noticed a rather attractive guy sitting on the opposite side from us. We were both affianced, but thought there would be no harm in buying him a drink, so we called over the bartender and told him to pour Mr Cute whatever he wanted. A few moments later, the bartender returned with the message that Mr Cute had refused our drink. Looking back across the bar, we noticed that he was trying hard not to make eye contact with us, and eventually he got up and left. We felt slighted. It's not like we were ugly or unappealing or anything. Sheesh.

A woman standing near the bar addressed us: "Don't feel bad, girls. That was Ravens quarterback Jim Harbaugh, a good friend of mine. He's a very strict Christian and married, so he didn't feel right accepting a drink from strange women." And she went on some more about how good and Christian and righteous he was. That's just swell, but even as a novice football fan, I was pretty sure that Mr Cute was not Jim Harbaugh. Definitely younger, definitely better-looking.

Eventually, my friend and I tired of the bar. On the way out, a mountain of a man--obviously a Raven--looked at us sympathetically and said, "Kyle can be a real jerk sometimes." Kyle? Kyle who? At home, a quick consultation of teh Innernets revealed that the only Raven of that name was punter Kyle Richardson. Who apparently was a jerk.

I still can't help but sneer every week when we watch him on Purple Passion, with his co-host, Keef Mills (aka Hatchethead).

The Bateman's on York Road is usually packed with college students during the school year, but it was pretty quiet early on a Tuesday evening in January. We started off with a small 5-piece order of Bateman's original wings and were happy to find them as good as ever. The wings are well-cooked and still somewhat crispy even with a light coating of vinegary (but not hot) hot sauce. 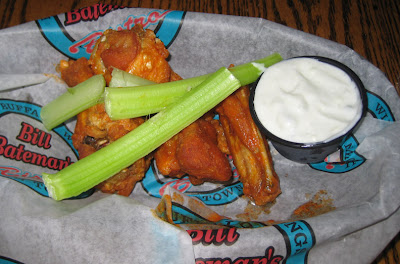 After a ridiculously long wait - about 25 minutes - in a near-empty restaurant (our waitress must have been having a quickie in the walk-in) our entrées arrived. 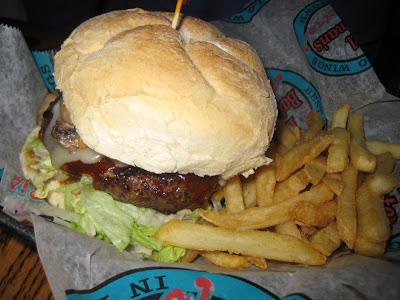 Mr Minx wisely chose one of Bateman's several burger options: the Ultimate, with hickory chipotle BBQ sauce, caramelized onions, mushrooms, jack cheese, lettuce and tomato. The Angus beef patty was cooked a bit more than the requested medium, but it was still nice and juicy, with a pleasant grilled flavor. The accompanying fries were standard food-service shoestrings, neither here nor there. 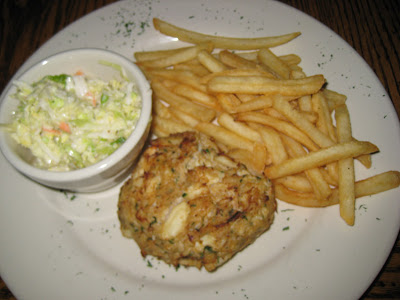 I branched out and decided to try the crabcake. It's Maryland, and Bill Bateman is a local, so I figured it couldn't be bad. Well, it wasn't bad, but it wasn't great, either. There was a lot of (not Maryland, not blue) crab, but there was also a goodly amount of breading, which tasted a bit stale. I also thought there was a bit too much seasoning, and overall the cake could have spent more time under the broiler. I don't understand why restaurants think light brown crabcakes look appealing, because they don't. My chosen sides - the boring fries and some slightly funky cole slaw - didn't lend any more excitement to my plate.

When dining at Bill Bateman's, stick to the wings.