This week's episode opens on the chefs in the stew room after Restaurant Wars. They're just getting over the fact that the boys sucked and Jor-El was sent home when Tom comes in with a sour look on his face. He tells them they've been evicted from the Driskill because the other guests are complaining about the kimchi and beer smell coming out of the penthouse, so they are going back to San Antonio, toot sweet. The seven remaining cheftestants pile into their apparently segregated sponsorship mobiles and head out of Austin. The girls' car is eerily quiet because they are busy hating on winner Beverly. 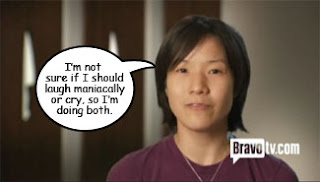 The next day, they meet once again at the Le Cordon Bleu kitchen, where there seems to be a new contraption waiting for them. A conveyor belt, not unlike a tiny luggage carousel at the airport, is coming out of the back wall. Padma (wearing the most hideous jumpsuit since the camel toe delight that Santino created for Kara Janx in season 2 of Project Runway) comes out with this week's guest judge, Eric Ripert, and tells the chefs that the conveyor belt will be part of the challenge. Various ingredients will be sent out on it and the cheftestants each must choose three to incorporate into a sophisticated dish. It's kind of like a DIY version of Chopped, in which the chefs will have to make do with combinations like Cream of Wheat, Neopolitan ice cream, and gefilte fish, or enoki mushrooms, canned peaches, and chilled monkey brains.

There will be some really choice items on the belt - like the monkey brains - but they will most likely come out towards the end of the 30 minutes, so the chefs really have to manage their time well if they want to finish.

Some of them grab whatever off the conveyor belt and start cooking immediately, but Squinty Chris has noticed a pot of lobsters and tries three times to grab them before he is successful, since the monkeys working backstage keep whipping it off the belt after one pass. Beverly chooses three random ingredients fairly early on in the game; despite this, she doesn't get her curried rice krispies on the plate before time is called. 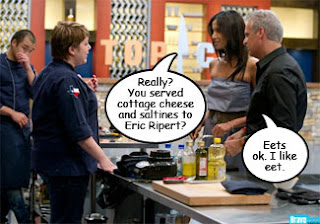 As per the routine, Padma and Eric go around and taste the chefs' dishes. When they get to Bev, they feign disappointment and ask to taste her missing component, which they really pretend to enjoy. Eric then tells the group that he didn't particularly like Chris', Grayson's, or Paul's dishes, but he really liked Lindsay's and Sarah's. Padma says that if Beverly had gotten her krispies plated, she would have won "by a mile." What a horrible way to tease that poor child! Hasn't she been bullied enough, Padma? Lindsay is given the win, and immunity from elimination. She seems annoyed that while she won the challenge, she seems to have actually come in second.

The Elimination Challenge this week is to create a dish fit for a queen. Squinty Chris immediately starts thinking of Queen Elizabeth, which of course leads to thoughts of Princess Kate and naturally to her sister Pippa's ass. I'm thinking real queens: Bruce Vilanch, Neil Patrick Harris, Hugh Jackman. Now wouldn't that be fun! 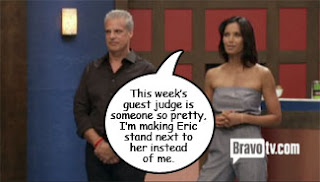 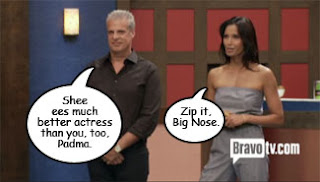 But no. It's Charlize Theron, who is neither a Queen nor a queen. Nor is she wearing McQueen, for that matter. Instead, she's playing a fictional queen in a movie. 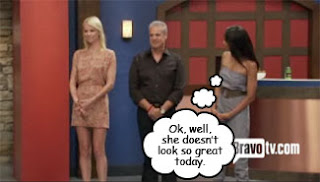 (Theron is a beautiful woman, no doubt, but her hair looked like overprocessed straw and her dress appeared to be a pillow case with head and arm holes cut out of it.) 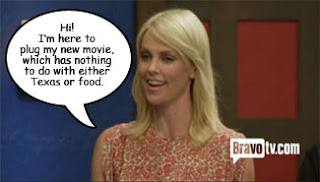 Ms Theron is playing the White Queen in the upcoming film, Snow White and the Huntsman, which also stars hunky Chris "Thor" Hemsworth, and Kristen "One Facial Expression" Stewart. 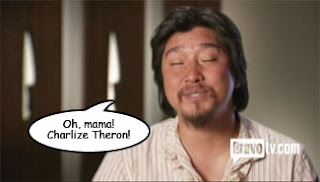 Charlize says she looves food, which is hard to tell by looking at her. She tasks the cheftestants to create a seven-course meal of wickedly beautiful dishes that involve real indulgence and risk-taking. The chefs seem really inspired by the idea and rush off to shop with $250 in pocket.

After shopping, we see Squints call his wife. Once upon a time, this would mean he was going home within the next thirty minutes, but these days, it could mean he wins. Who knows? At this point, scenes like that have become non sequiturs.

The next day, the chefs convene at the Southwest School for Arts and Crafts to prepare and serve their meal to Charlize, Padma, Tom, Emeril, and Ripert. 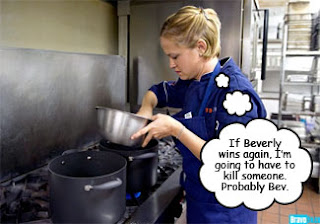 Ed serves his dish first - a tuna tartare with two sauces representing good and evil, garnished with fried fish scales, which look spiky. Charlize says she could eat this dish every day. Paul then serves an "enchanted forest" with about 114 different items including bacon, foie gras, and beets all squashed onto one small portion of the plate, garnished with a "bloody" handprint. 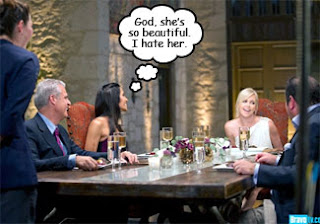 Again, the judges love the dish. Bev serves halibut - to prove that she can cook the fish properly - with black forbidden rice and a red curry sauce. Once more, there's nothing but praise in the air. The same goes for Lindsay's sea scallop with "witch's stew," Sarah's red wine risotto with lamb heart, Grayson's black chicken complete with claw, and Chris's cherry-filled baked apple with rice krispie maggots. Tom declares it the best meal they've had all season, and that picking a winner and a loser will be very difficult. 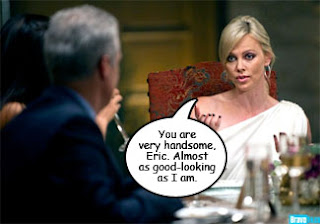 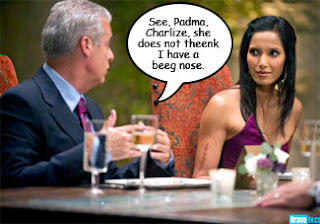 Padma calls everyone out from the stew room and each are praised in turn. Paul has created the favorite dish, and not only wins the challenge but two tickets to the world premiere of Snow White and the Huntsman, starring Charlize Theron, coming to a theatre near you!

Is it me, or are the auxiliary prizes crappier than usual this year? Next week, they'll probably give away a trip for two to Cleveland. 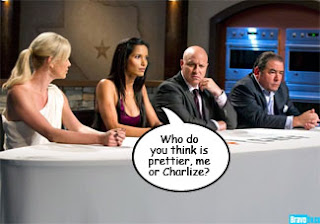 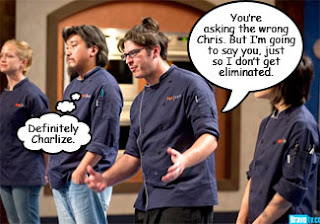 Ed and Chris are safe, as is Lindsay who has immunity. That leaves Bev, Sarah, and Grayson potentially on the chopping block. While their dishes were amazing, the judges found things to nit-pick about each of them. Sarah and Grayson had overly-salty elements, Grayson's quail egg and foie didn't really work with the rest of the plate, and Bev's curry sauce had a disgusting texture. Her plate wasn't quite macabre enough, either, and despite coming on so strong in the last challenge, she's the one who gets sent home. 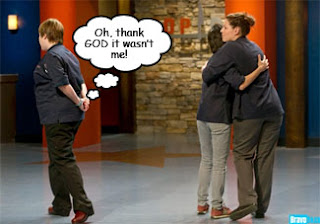 I suppose it was inevitable that Bev get eliminated before too long, but I kinda hoped to see her, Ed, and Paul in the finale.