This week, our five remaining celebrities - Lou Diamond Phillips, Taylor Dayne, Summer Sanders, Coolio, and Joey FatOne - are tasked with (wo)manning lunch carts. Rather than dishing out felafel or dirty water hot dogs, each team is responsible for 100 portions of three dishes, one of which needs to be on a stick, one in a wrap, and one in a bun.

I'm sure there's a joke in there somewhere, but I haven't had my coffee yet.

Rachel and Guy meet with their teams. Coolio immediately declares he knows exactly what he's making - another dish from his childhood - "soul rolls," basically ghetto eggrolls made with ground meat and cheese. But Coolio is crazy so he's talking about using alligator meat and making two different dipping sauces. Riiiiight. There's only 90 minutes to cook, dude. Teammate FatOne is far more sane and taking on something that he can make in his sleep - meatballs - and serving them as sliders. The two of them will work together on the bacon-wrapped shrimp skewers with chipotle bbq sauce that are suggested by Guy. 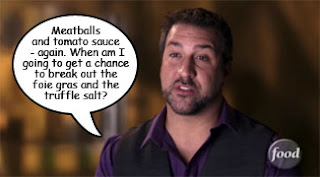 On Rachel's side, LDP volunteers to do sloppy Joe sliders. Summer wants to do something healthy, but Taylor pooh-poohs that idea, saying that when she visits a lunch truck, she wants meat, baby. Like a big juicy sausage. Summer says oh yeah, she loves sausage.

I know, I know - there's another joke in there somewhere. Coffee. 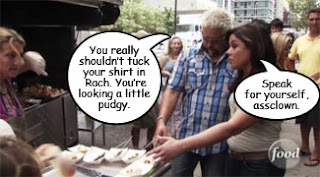 Rachel suggests that Taylor do teriyaki beef skewers, which prompts Taylor to tell us that she doesn't know how to make teriyaki, nor has she ever grilled. She demonstrates her lack of teriyaki chops when she disregards Rachel's suggestion not to add yet more soy sauce to her marinade by dumping in a whole other bottle. Taylor's perhaps hoping that some urban deer in need of a salt lick will stop by and vote for their team.

Over on the boys' side, Coolio is over-confident about his dish, and talks a lot about "coagulating" the flavors. He used that word last week, too. Cool, baby, it's not blood. He does a test eggroll and discovers that his frying oil is crazy hot, burning his creation in ten seconds flat. So while Coolio's busy turning down the heat, draining and replacing oil, poor FatOne is working on both his own meatballs (come on, you can think of a joke yourself) and working on the bacon for the shrimp dish. 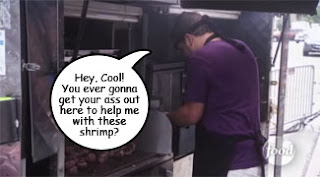 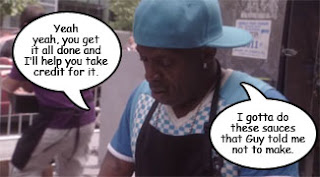 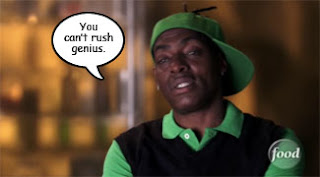 Taylor also has temperature issues with the grill; her meat is too brown in some spots, too raw in others. She tells us again that she's never grilled, which I'm beginning to believe. 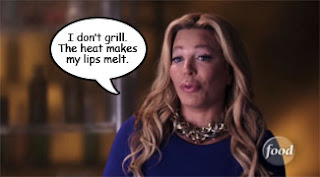 Once the 90 minutes of cooking time is up and the crowds converge on the lunch trucks, she feeds Guy some mostly-raw meat. And it's also too salty. As for the team's other two dishes: LDP's barbecue sloppy Joe sliders, not surprisingly, are a big hit; Summer's bland sausage wrap, not so much.

Meanwhile, Coolio and FatOne are getting off to a slow start. While they're struggling to get enough portions of food made, Taylor attempts to take advantage of the situation by luring Team Guy's hungry crowd over to Team Rachel's truck. FatOne tops her by getting out a megaphone and urging the crowd to come back. Eventually Coolio and FatOne get their shit together and prepare enough food. Rachel and Guy love all three of their dishes, the soul roll, the meatball slider, and the bacon-wrapped shrimp.

While the diners are dining, the celebs hand out comment cards and beg for votes. Team Guy must have begged nicely, because back in the kitchen, it is announced that they have won the challenge. This means that two members of Team Rachel have to do battle to see who gets to stay and who gets sent home. LDP's sliders were well-received, so he is safe, leaving Taylor and Summer to duke it out. 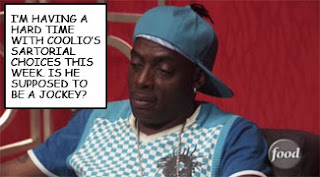 This week's Blind Tasting challenge is to create an amuse bouche in ten minutes. Taylor thinks Guy says, "moose boosh," which is actually what it sounds like he said. Think they serve amuses bouches at either of Guy's restaurants, Tex Wasabi or Johnny Douchebags?  Sorry, chips and salsa doesn't count. Anyhoo...they get to cooking. Both choose fresh figs, with Summer putting together a little tartlet filled with goat and mascarpone cheese, topped with a fig and a balsamic reduction, most of which she claims she's never eaten before. (!!!) Taylor thinks back to vacations she's taken and concocts a proscuitto and feta bruschetta with fig. All the while reminding us that she doesn't grill.

Guy and Rachel taste the dishes and seem to be fairly pleased with both, but in the end, Taylor's dish wins out once again. This gal has 9 lives! Summer goes home, leaving each team with only two members.

Next week - a double elimination! Only one member of each team can go to the finale. I'm guessing it will be Coolio and LDP, but who the heck knows. The way Taylor's been going, she might end up the accidental winner.