By now, you've probably all heard that mayonnaise's best friend, Paula Deen, has diabetes. She's had it for three years now, but has only just announced it publicly because she also has a nifty new endorsement deal with the diabetes drug, Victoza, manufactured by Novo Nordisk. How convenient. I'm surprised she hasn't already had endorsements from the Dolly Parton Wig Company and Polident.


What a great idea! Let's see, I can eat food that kills millions of people, then when I get sick, I can run to the big pharma companies that want everyone hooked on their anti obesity medications and then all of my loyal fans can do the same. It's a win win! Big pharma wins, healthcare companies win and our kids, well who cares about them, as long as Paula makes money, everybody's happy. WTF!

First of all, endorsing big pharma is just nuts. How many uneducated diabetics are going to ask their doctor for this drug? A lot. Totally unqualified people following in Paula Deens footsteps and playing into the hands of the healthcare abyss. 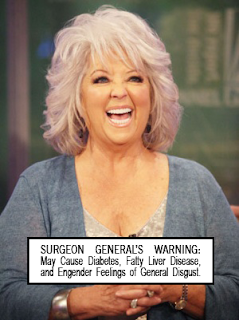