Guy and Rachael meet the six remaining celebrity cheftestants in the kitchen and tell them they will be competing head to head - one member of Team Guy vs one member of Team Rachael - in three rounds. The loser of each round will have to face each other in the Blind Tasting, with one person being sent home. 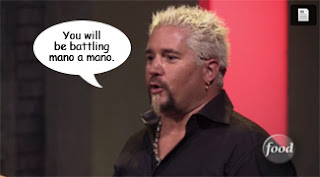 You just know Guy thinks that means "man to man" rather than "hand to hand."

Because Guy and Rach are "mentors" - you know, just like Tim Gunn -  and team leaders, they of course can't be the ones to pick the winners of each match-up, so they call in some particularly cranky experts to do that bit of dirty work for them: judges from Chopped, including wanna-be Iron Chef Alex Guarnaschelli, Top Chef Master Marcus Samuelsson, and star of the Food Network's new show, Cook Like a Douchebag, Scott Conant. 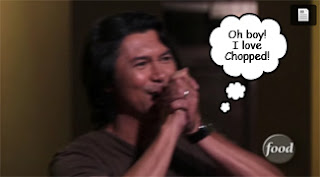 LDP gets all fangirly, as he watches Chopped "religiously." He's thrilled and terrified at the same time; he knows how tough those judges can be, especially when one serves seafood with cheese and raw red onion to Conant. 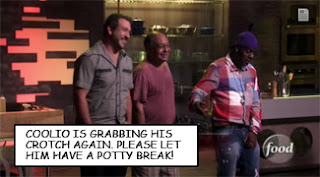 The Chopped judges will not only be judging, but will also provide the theme for the dish that each duo of celebs must cook. Marcus Samuelsson goes first and reveals that he would like the celebs to make fried chicken. Guy says that Coolio talks nonstop about fried chicken, so he picks him to represent Team Guy. No stereotyping here, folks! Rachael also picks the non-white on her team for this round: LDP.

Rach and Guy pow-wow with their contestants beforehand; after the clock starts ticking, they both shout out suggestions and corrections. I have to admit, it all seems rather fun. Maybe not for the nervous chefs who have to please Douchebag Conant, but for me, because I'm not actually there and can get up and leave the room if I want to.

One notable moment in the cooking comes when LDP struggles through the dipping sauce that Rachael suggested he make. He's not really getting why chicken needs a dip, or why soy and honey would work for this task. When he decides to add a bit of freshly grated ginger and tastes the mixture, suddenly he gets why the sauce and its components would work. It's "epiphanous" to him. Thank you, LDP, for using a word other than "awesome."

Coolio is also having saucing issues, and he adds a cornstarch slurry to thicken his, much to the judges' chagrin. Why not? Isn't that a standard way of thickening a cooked sauce? 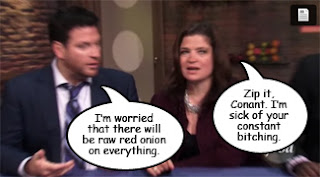 At judging, the three Chopped judges basically all rave over both LDP's and Coolio's chicken. The sauces are excellent, even if, as Alex puts it, Coolio is a "crime against food."

The next battle involves Scott Conant's buttered spaghetti with basil, with Taylor Dayne and Joey FatOne doing the cooking. 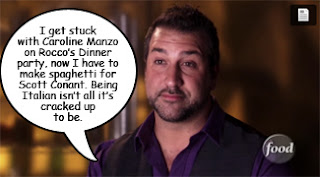 FatOne makes a tomato sauce loaded with dried oregano and red pepper flakes, while Taylor goes very very simple, carefully following the notes she took from her meeting with Rachael. When their dishes are presented to the judges, at first both seem really great, but then it comes out that FatOne's is overseasoned, while Taylor's tastes nicely of the tomato.

Finally, it's Alex's turn to request a dish. 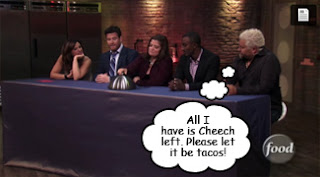 She chooses the porterhouse steaks her dad would regularly burn for her family, topped with a blob of compound butter. Summer is nervous because she says in her house, her husband is the steak chef, so she's never dealt with it before. Cheech seems pretty relaxed on his side of the kitchen--even though he admits that steak isn't a typically Mexican meal--until he sets his oven mitts on fire.

When it comes time for judging, the Chopped gang is really pleased with all of the elements of Summer's plate, particularly the compound butter she made with the flavors of Bloody Mary. Cheech's butter, on the other hand, was much more plain and unimaginative.

The celebrities receive the verdict on their battles all at once. The winner of the fried chicken battle betwen Coolio and LDP is "Cornstarch" Coolio. The winner of the pasta battle between Taylor and FatOne is Taylor. And the winner of the steak battle between Summer and Cheech is Summer. So the three whom I think are the best cooks in the competition - FatOne, LDP, and Cheech - are on the chopping block, so to speak. They have to participate in the 10-minute fiasco known as the Blind Tasting. Guy and Rachael give them their task - grilled cheese - and then leave the room while the celebrities panic.

Cheech and LDP go fancy with their sammies, choosing hard cheeses and proscuitto, and crunchy breads. FatOne thinks of his kids (awwww!) and makes a white bread and American cheese sandwich that he decorates with a pickle spear mouth and tomato eyes. 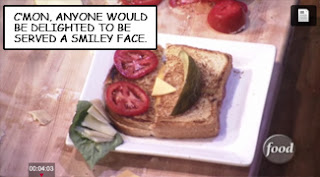 Rachael and Guy taste the three sandwiches and declare FatOne's the winner because the bread is toasted and the cheese is melted - hallmarks of a proper grilled cheese sandwich. Meanwhile, the cheese on the other two sammies is not melted (probably because they sliced it rather thickly), and Cheech's is greasy. So Cheech goes home. 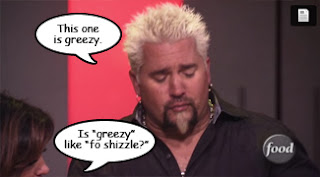 Kinda surprising, but oh well. BTW, Cheech will be co-starring in CBS' "Rob," starring Rob Schneider, which means it might last a whole 6 episodes. But Cheech is probably relishing that the voice-over guy for the promos they've been airing incessantly during the NFL Playoffs is the first person ever to pronounce his last name correctly. 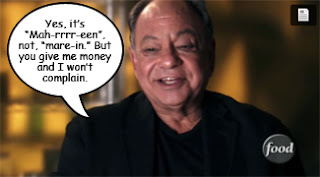 Next week: The celebs run lunch trucks and potentially poison the general public.