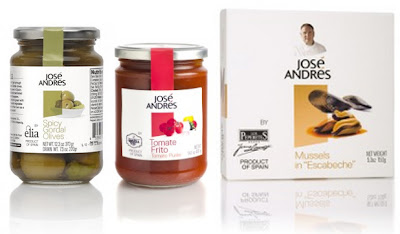 Most foodies know the name of José Andrés, the charming and amusing Spanish chef who started his U.S. restaurant empire in Washington, DC. Those who haven't eaten at Jaleo, Oyamel, Minibar, Zaytinya, etc., might know him from his PBS show (one of my favorites), Made in Spain. And those who don't know him at all may soon find him in the local gourmet shop or grocery store.

José Andrés Foods line of extra virgin olive oils and sherry vinegars, seafood tapas (including sea urchin roe), olives, and potato chips (yes, potato chips!) will be hitting the shops soon. I got to try several items from his line at the Fancy Food Show in July.

The Galician mussels come in a simple sauce of olive oil, red pepper, onion, and tomato, and are tasty hot or cold. I had to stop myself from sucking down two or three. I also enjoyed the potato chips, which are very thin, light, and crisp. I'm sure he includes them in his line because they'd be perfect in his cheater's version of tortilla espagnole. Commonly made with sliced, fried potatoes and egg, the version in Andres' Tapas cookbook uses potato chips. There are also olives, capers, four different extra virgin olive oils, more seafood including white tuna, and sherry vinegar.

Right now, his products can be ordered from his Web site. They're not cheap ($6 for 6.7oz of chips!) but I feel they are definitely worth a try.