Take Me Out to the Ballgame

I know this post comes really really really late in the season, but I attended my first Orioles game in about four years just this past weekend. When I was younger (much younger), I was a rabid fan and went to as many games as humanly possible. It became even easier to attend games when the family moved within walking distance of Memorial Stadium. But since the Os moved downtown, I probably haven't been to a dozen games. Part of the reason is that the park is a pain to get to, and part of it is that the Os sucked for what, 14 consecutive years? 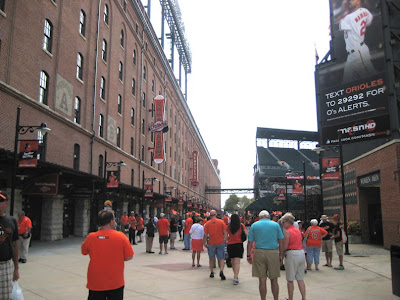 They're not sucking so much now, so I was eager to take advantage of some free tickets. I figured while at the game, I could check out the new and improved concessions available on Eutaw Street. Along with stalwart Boog's Barbecue, there's Stuggy's hot dogs, Gino's, and Rick Dempsey's eponymous restaurant in the warehouse.

After a semi-crappy $20 lunch and insanely-priced beer, I recommend that game attendees with shallow pockets take advantage of the fact that MLB allows patrons to bring food and drink in from home. 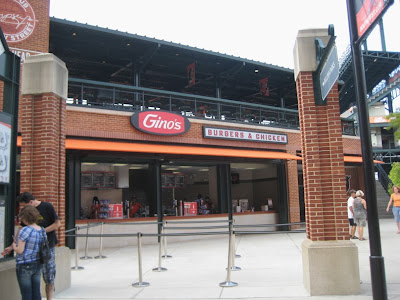 I was so intrigued by the idea of a Gino's Giant topped with a crab cake, I had to order the Camden Giant, despite the fact that it came with fries and cost $16.50. The burger came out fast; it was piping hot, fresh, and tasted much like the Giant that I regularly order and pay $6 for at the free-standing Gino's on Joppa Road. Except for that crab cake. About 3" in diameter and not worth the $4 more the Camden Giant cost over the regular Giant, the "crab" cake could have been made of any fish-like substance. Even cat food. It had an off flavor, was very fishy, and should scare most out-of-town baseball fans away from our fair city's favorite seafood treat. 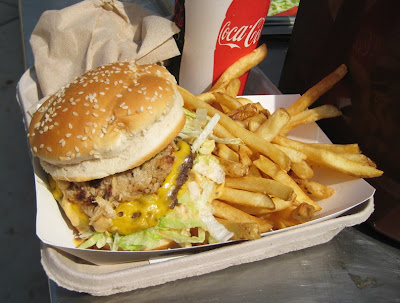 My brother chose to sample the bacon on a stick sold at the Jack Daniel's booth. The thick slab of tender pork belly, coated in a sweet glaze with hints of dried herbs, was a more reasonably-priced $5. And there was nothing fishy about it. That heart attack on a stick was mighty tasty, and almost made us forget that my small soda cost $4.50 and his 12oz cup of Heavy Seas Loose Cannon cost three dollars more. 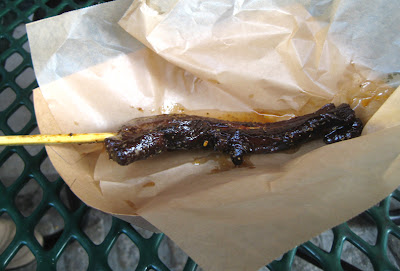 While the food prices were ridiculous and the Os lost the game, the real reason I'm not planning to go to another game any time soon is the Maryland MTA. Not only did the hordes of angry post-loss stadium evacuees have to wait 20 minutes for a train, but the conductor announced that he was dumping us at North Avenue just as we were approaching Cultural Center (a mere two stops prior). I immediately intuited that the "bus bridge" assigned to carry the abandoned passengers to the next working station would be: 1) a grand total of two buses to transport two train's-worth of standing-room-only passengers; 2) a clusterfuck. Because that is the way of the MTA. I scrambled to reach Mr Minx by phone, and after three disconnects (thank you, Virgin Mobile!) managed to telegraph that we'd be alighting at Mount Royal and awaiting his arrival.

He arrived quickly and we were able to continue our journey home in a civilized manner.