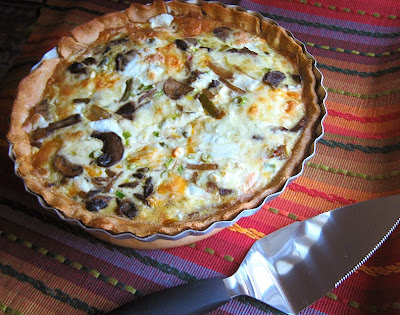 We had refrigerated pie crusts. We had eggs. We had mushrooms. We had half a gallon of half & half (Mr Minx and I each put one in the shopping cart and didn't notice until we were unpacking the groceries at home). It seemed like a good time to make quiche.

I haven't made quiche in a long, long time, and I can't even remember if my last attempt was successful or a big disaster. This attempt was somewhere in between.

My first mistake was to forget to line the pie shell with foil before pouring in the rice I use as a pie weight. I discovered my glaring omission when I attempted to pour the rice out of the crust and found a goodly portion of it embedded in the bottom. As I was rubbing the (hot) rice out of the (hot) crust while attempting not to burn myself on the (even hotter) pie pan, a couple of pieces of side crust decided to break off and fall onto the counter.

At least the actual blind baking portion of the program went well. The crust was browned and didn't shrink much at all.

I replaced the crust as best as I could, then filled it and baked it. It looked lovely when it came out of the oven (as evidenced by the photo above) but it was impossible to slice neatly. The beaten egg and half & half mixture had seeped through the crust and glued it to the pan.

No worries. I just scooped it out with a big spoon. It still tasted pretty great.

Prebake pie crust, with pie weights (and foil!), for about 20 minutes at 375°F. Remove weights and allow shell to come to room temperature.

Put the onions and vegetables in the shell, top with the cheese. Beat the eggs and half and half in another bowl until well-combined. Season with salt and pepper and nutmeg. Pour egg mixture over vegetables.