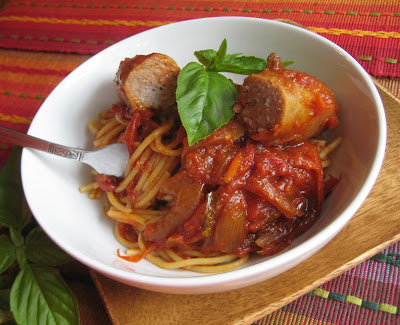 When I was a kid, I had a strong dislike for bell peppers. The only ones I had ever encountered were green, and those made me belch. Not only that, I didn't like the way they made everything they touched taste like green pepper. About the only thing I really liked that contained the green menace was my Dad's sausage and peppers. He cooked the peppers forever at a fairly high heat until they blackened and shriveled. Once mixed with tomato sauce, they basically disintegrated.

I was probably an adult already when I discovered that green bell peppers were unripe red, yellow, or orange peppers, and that once a pepper ripened, it was milder and less belch-y. They're even less gas-inducing if they're skinned, so I almost always roast bell peppers before using them (except, of course, if I am using them raw, which, er, I don't do). One exception is when I make sausage and peppers. Like Dad, I cook the peppers for a long time, almost until they're unrecognizable. I don't char them like he does, but I cook them for a very long time until they almost dissolve into the sauce.

3 red, yellow, or orange bell peppers
extra virgin olive oil
salt
2 onions, sliced thinly
1 lb Italian sausage, sweet or hot or a combination of the two
1 24-26oz jar of pasta sauce (plain marinara-style is best) or a quart or so of homemade sauce
handful of basil leaves, cut into a chiffonade

Cut each pepper in half, removing stems, seeds, and core. Slice into thin strips.

Heat a large skillet over medium-high heat. Add a couple tablespoons of olive oil, the pepper strips, and a pinch of salt. Cover pan and cook for 15 minutes, stirring occasionally. The peppers should be very wilted at this point and fairly brown on the edges. Add the onions and another pinch of salt. Cover pan and cook an additional 15 minutes, stirring occasionally. If the onion appears to be browning too quickly, lower the heat.

Add the sausages. Cook, turning the sausages once in a while, until they are browned on all or most sides.

Pour in the sauce and bring to a boil. Lower the heat to a simmer and cook for another 30-45 minutes or until everything has amalgamated to your taste. Stir in the basil about halfway through cooking time, reserving some for garnish.

Serve over pasta or on sub rolls with mozzarella cheese.