On Saturday, Mr Minx and I ventured down to DC to have lunch with our friend Melinda and her beau, Dave. She suggested her favorite restaurant, Oyamel, a perfect choice for a vegetarian like her, that also fit in with my desire to try one of chef José Andrés' establishments.

I haven't eaten a meal in DC in many years, partly because it's annoying to get down there, and once there it's hard to find a place to park. We solved that problem by meeting Melinda at her home and then taking the Metro from there. Oyamel is located a convenient two blocks from the red line Gallery Place/Chinatown stop and another of Andrés' restaurants, Jaleo. We'll try that one next time.

We ordered a ton to eat, but the portions are small - tapas-style - even though the food is Mexican. After starting with a molcajete (Mexican mortar) full of guacamole, with super-salty tortilla chips, we tried.... 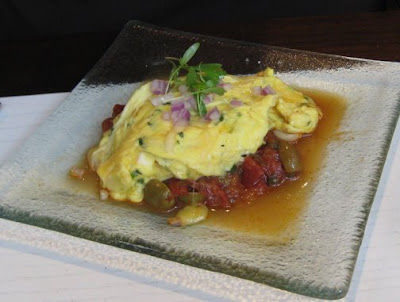 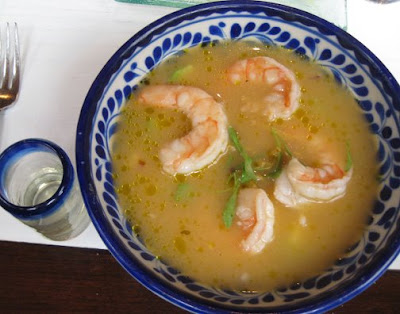 Sopa de chileatole al lima y tequila con camarones - A delicious lime and corn masa soup with shrimp, marinated red onions, cilantro and reposado tequila. I expected the soup to be thick, since masa was an ingredient, but it was of standard broth-consistency. Mr Minx thought the added tequila shot made it taste perfume-y. 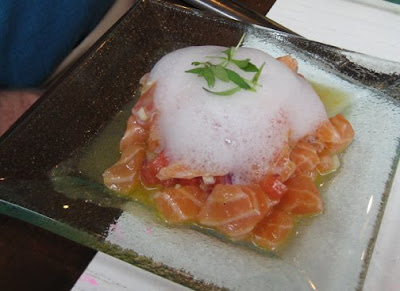 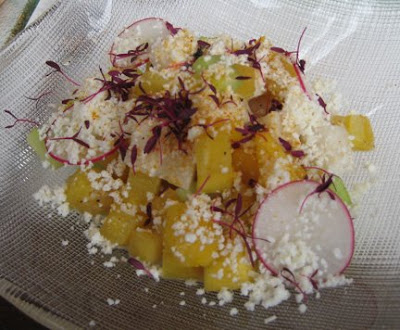 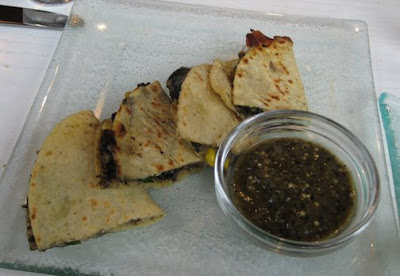 Quesadilla huitlacoche - Traditional folded corn tortilla with oaxaca cheese and black Mexican truffle. This tasty quesadilla was generously filled with huitlacoche, a.ka. "Mexican truffle." It's actually the product of a disease called corn smut, caused by the pathogenic plant fungus Ustilago maydis. The accompanying salsa was incendiary, but Dave was happy to put it on just about everything except dessert. 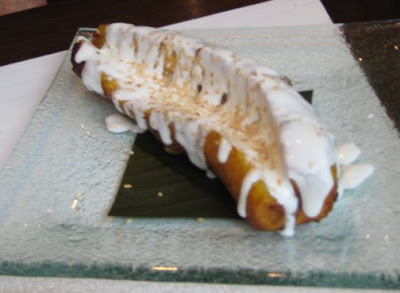 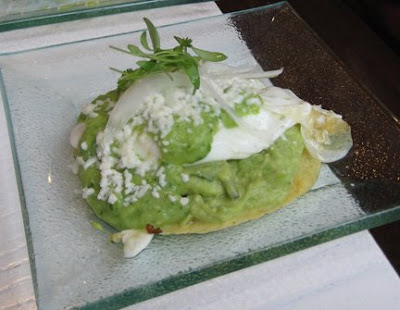 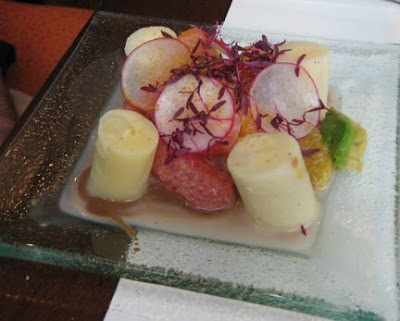 Ensalada de palmitos - A salad of hearts of palm, orange segments, radish and avocado, with a tamarind dressing. Would be nice to get fresh hearts of palm sometimes, but where? 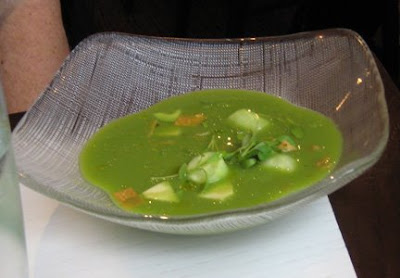 Gazpacho Verde - A refreshing cold green gazpacho with tomatillo, cucumber, green chile, cilantro and lime juice. Would be very easy to make at home, as it tasted largely of cukes and cilantro. 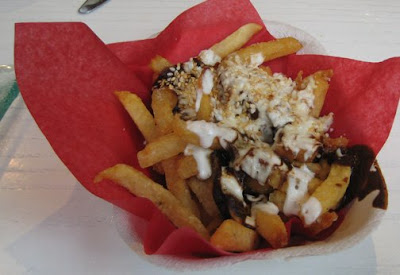 Papas al mole - José Andrés’ favorite fried potatoes in a mole poblano sauce of almonds, chile and a touch of chocolate, topped with Mexican cream and aged cotija cheese. After reading good things about this particular dish, I was left disappointed. The fries were stubby and greasy and difficult to pick up without a fork, and the molé was so mild, it could have been Hershey's syrup.
We also tried carnitas, mushroom, tongue, and duck tacos. So far I still haven't found carnitas to match the meltingly tender ones I ate in San Diego in the 80s. The duck confit was dry, but the tongue and mushroom versions were tasty. 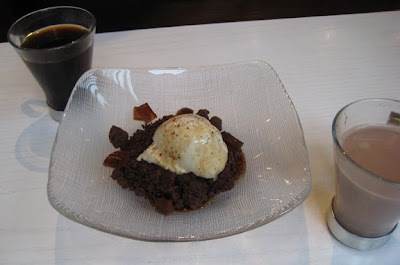 Café de Olla (dessert) - A Mexican custard of milk chocolate and Chiapas coffee, with a gelatin of Kahlua liqueur and spiced syrup of brown piloncillo sugar. Sprinkled with crumbled cookies and almonds and served with a scoop of star anise ice cream. Dave loved the ice cream, but I thought it tasted like some nasty medicine I had to take as a child. 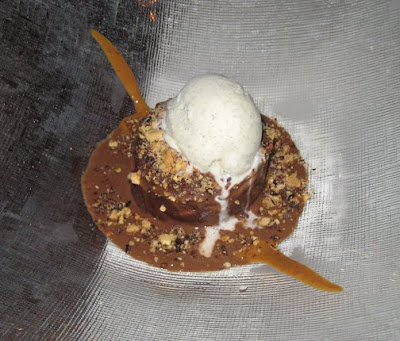 Pastel de chocolate con crema de Mole Poblano y helado de vanilla - Warm chocolate cake with a cream of mole poblano sauce and a froth of spiced Mexican hot chocolate, sprinkled with crushed peanuts, corn nuts and cocoa beans. Served with a scoop of homemade vanilla ice cream. Yum! The cake was very moist and very dense, and the oddball accompaniments were actually pluses. The mole sauce tasted heavily of anise, which I could not detect in the version on the fries. 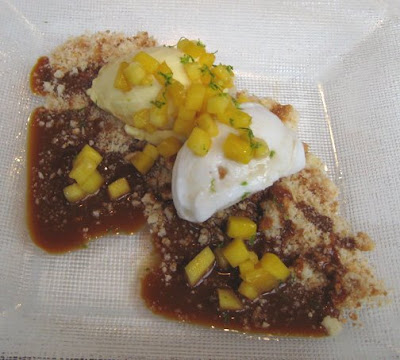 Cajeta tradicional y moderna - A traditional sweet caramel made from goat’s milk,with crumbled Mexican shortbread, sprinkled with caramelized cinnamon, fresh mango and fresh lime zest. Served with a scoop of passion fruit sorbet and a scoop of coconut sorbet. I love cajeta. This was a little thin, but the combination of caramel and mango plus the sorbets was fantastic. The passion fruit sorbet was my favorite part of the whole meal.

About that. While the meal was good overall, neither Mr Minx nor I were particularly excited by anything. The flavors weren't as bold and interesting as we had expected them to be. Perhaps we're spoiled? (Actually, I'm sure of that.) I think if the carnitas and the duck had been tender, they would have swayed our opinion. Not that I didn't enjoy the meal; I just didn't enjoy it as much as I had thought I would.

In any case, I'm glad I got to try Oyamel. Now I have to try Zaytinya, Jaleo, and Café Atlantico. And I'd love to try Minibar most of all.