In mid-May, we took a trip to Perennial Farms to buy some plants for our garden. On the way back down Cromwell Bridge Road, we just about got whiplash when we noticed a big sign proclaiming Pho Towson & Bar attached to the front of a Best Western hotel. We made a mental note to come back later to check it out.

Later ended up being a weeknight evening in June. We walked into the hotel and were momentarily confused by what seemed to be a buffet reception of some sort going on in the lobby before we spotted the door to Pho off to the left. The restaurant's two-level dining space is bright and airy, with a wall of windows on one side. The walls sport an attractive aqua-and-chartreuse striped paper, but are otherwise oddly decorated with a couple of flat screen televisions and hotel art. (A close-up of the hands from Michelangelo's Creation of Adam was in our line of sight.)

The restaurant had a pretty good crowd despite the early hour, a nice mix of Asian and non-Asian patrons, and from the conversations we could hear, several people were repeat customers - always a promising sign of good things to come.

The menu at Pho is fairly limited. There's a handful of appetizers like spring rolls and summer rolls, a page of pho, another of com (rice) dishes, and still another of other noodle dishes. The last page features a long list of exotic-sounding beverages, most of which are milkshake-type concoctions made with various fruits and vegetables and sweetened condensed milk, and that can be had with or without boba (large pearls of tapioca). We tried the avocado and taro flavors. Both were mildly sweet and had distinct avocado and taro flavors.

We also tried the summer rolls, which were loaded with fresh mint. 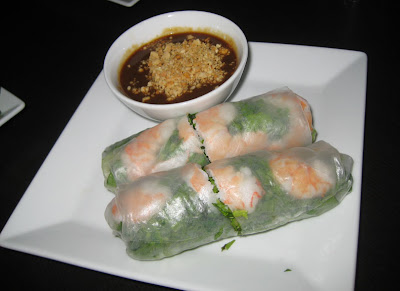 We sampled the bun tom thit heo nuong, vermicelli served with grilled pork belly and shrimp. The proteins had a really nice grilled flavor, and the pork belly was pleasantly chewy. 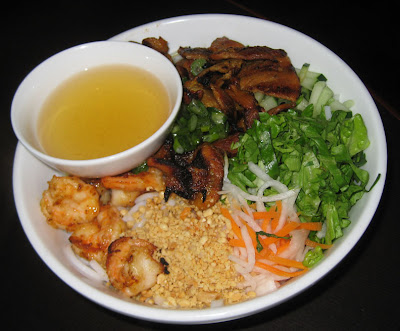 Next up was com tom ga muc xao xaot, a stir fry of shrimp, chicken, and squid, in a sweet-ish sauce flavored with lemongrass, onion, and bell pepper. It came with a bowl of ginger-flavored broth. 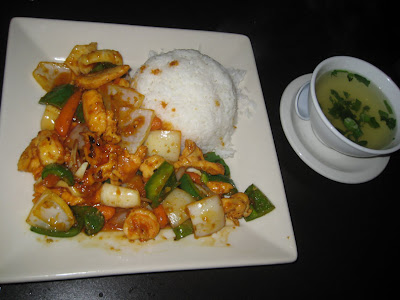 We ordered the restaurant's namesake dish, the Pho #1 with lightly-cooked beef, tendon, and tripe. The broth was disappointingly wan, only lightly beefy, with a bit of a cinnamon aftertaste, but the proteins were all very tender, and the garnishes of basil, beansprouts, and sliced jalapenos, were generous. 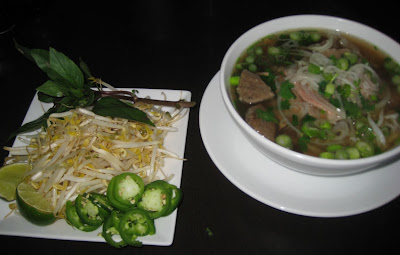 Despite the disappointing pho, both the com and bun dishes we tried were very good. And those creamy milkshake drinks worked nicely to beat the heat of the jalapenos that I poured into the Pho. The last few sips also worked nicely as dessert.

We'll be back to try more.