Hey, boys and girls - we're back with a regularly-scheduled Food Network Star recap! Yes, I know you're thrilled to death, as am I.

This week, the Wannabes are still in Miami at the South Beach Wine & Food Festival. Right away, the episode's focus is on Martita. She tells the viewers that she has to step it up, so we know it's curtains for her. They did the same thing with Malcolm last week.

The Star Challenge this time around is to do a live cooking demo in front of 100 people. They'll each have three minutes to present a signature dish, tell stories, give tips, and generally be "entertaining." Some of them will need to bring out live monkeys, jugglers, and maybe get shot out of a cannon to achieve that. Wouldn't it be fun to see Giada shot out of a cannon? Wait...that won't work. Her head would probably get stuck.

Before the fun begins, the Wannabes run to an outdoor kitchen miraculously stocked with the exact ingredients they need to cook up their dish. They make tasting plates for the judges and prepare a couple of swap-outs for their show-and-tell.

When it comes time to present, Alton laughs maniacally and tells Tushface and Susie that they've purposely sabotaged each contestant based on their biggest weakness.

First we see Justin get heckled by a random guy in the audience. 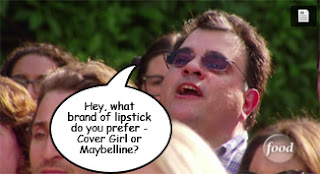 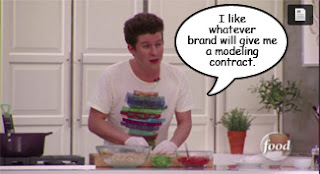 At first Justin does well with some funny retorts, but by the fourth question from the same heckler, it's clear he's a bit angry. The judges notice, but they do like his Nacho-stuffed won ton dish.

Nikki's next, and her blender is rigged not to work. This flusters her, which causes her to lose timing and not finish her presentation within the three minute limit. Please tell me why this woman is still here?

Yvan's audio goes out on him after the first several seconds and while he is given a mic, he decides he'll just yell instead. Giada is super-excited at this new development: Yvan has grown a personality. 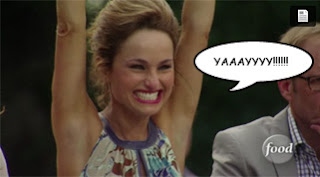 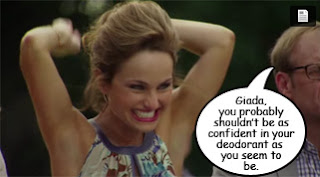 He actually does a great job connecting with the crowd while telling a story about his girlfriend and preparing a nice oyster dish that the judges find elegant. 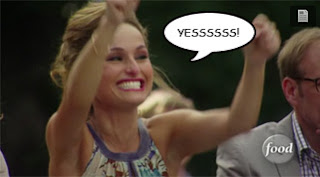 Ippy starts out pretty well, but then his audience starts chatting loudly amongst themselves, which throws him off. Then they start walking out on his presentation, which really flusters him and makes him a bit angry. I wish he would just turn into the Hulk already and smash, but he manages to keep his anger in check and his clothing intact. The judges are slightly alarmed, but seem to enjoy his unusual East meets West pasta dish (vodka sauce with miso!).

Martita is making chiles rellenos, and the pranksters have swapped out her poblanos for small red chiles. This causes her forget the story she planned to tell about making this dish for her girlfriends. She instead turns into a walking cookbook, basically narrating the recipe and finishing a bit early. She fills the last few second with jabber about Martita's Mesa, which gives Giada the eyerolls. Martita's Mess-a, indeed. 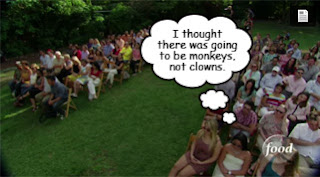 Alton thinks Martie has control issues, so he's replaced some or all of the ingredients for her fish in parchment, including the fish and the parchment, with Folger's Crystals. Surprisingly, she rolls with it, unwrapping one of the packages she's already assembled and even taking it to the front of the counter to demonstrate in case the crowd can't see what she's doing. Tushface is impressed by her unflappability and fearlessness, and he raves over the elegant simplicity of her dish as well.

Finally, Michele, who already has timing issues, is given a boatload of bad timing cues. First she's told that she's got 2 minutes out of three left, but then the time card guy holds up one that says "5:30" and a few seconds later, "4:30." She freaks out, says half of what she intends to say, and finishes a minute and a half too early. When she realizes she has a lot more time, she starts talking about going clamming and suddenly gets comfortable with the topic and has fun. There's such an obvious joke in there I'm not even going to touch it. The judges think she's "adorable."

The next day, the seven face the judges, who tell them that there are two standouts - not surprisingly they are Martie and Yvan, who really killed it. Everyone else is safe...except for Ippy and Martita, because it's Team Giada's turn to lose a member. We all saw that coming, didn't we? The final two should have been Nikki and Martita, but Team Bobby couldn't afford to lose another member if Nikki fucked up.

As with the Star Challenge, the Producer Challenge this week involves expecting the unexpected. Ippy and Martita are given a food item that is hidden by a cloche. They must remove the cloche and talk about the item in a 60-second on-camera presentation. This week there are no rehearsals. The judges sit in on the filming so they don't have to watch later.

Ippy seems excited about receiving oranges and goes into a story about eating his neighbor's tangerines with a concoction of soy and hot sauce that his father called, "bug juice." He doesn't mention that the "bug juice" is a dip (although I deduced it), and he's not really talking oranges, but he seems enthusiastic and does well enough. 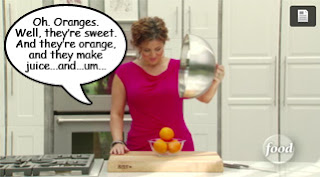 Martita just talks about oranges and how they can be used in marinades and beverages. Once again, no personal story, which is what the judges have been attempting to squeeze out of her all season. See what I did there - squeeze? Oranges? Oh, nevermind....

They've set up a faux Shrine to the Goddess Vagina in Miami this week, a rectangular table with a large rectangular glass center. Not quite the same, but better than last week's lack of vaginal representation. Martita tells the judges that she was happy to see oranges because her father used to work in the orange fields. Why didn't she mention that in her presentation? 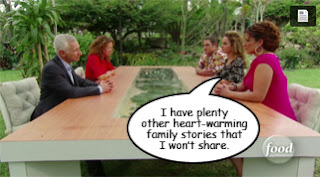 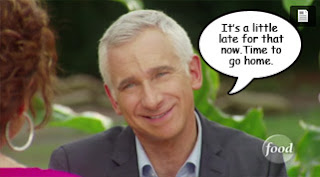 And for that, they sent her home.

Next week: the Wannabes shoot promos for their potential Food Network shows. Three of them are sent home. Guesses as to whom?