So...when we last spoke about recapping Food Network Star, Mr Minx and I had just experienced the power outage of a lifetime. Well, that's not exactly true - Hurricane Isabel knocked out our power for four days back in 2003. One four-day outage in a lifetime is plenty, let me assure you, but two? This time, our power was knocked out by something called a "derecho" which apparently is a pretty deadly line of storms. We're not big fans of Mother Nature right now.

However, we watched the episode on Tuesday evening on the Food Network Web Site, via Mr Minx's laptop, while on our four-day free-load at my dad's apartment. I did not take notes. And I am typing this three days later. This could be fun, huh? Or a complete clusterfudge. :)

Mmmm...clusterfudge. I'll have mine with peanut butter and chocolate chips, please.

Anyhoo - the Wannabes are down in Sweatyville, USA. No, not Baltimore, Maryland, but South Beach, Miami, Florida. The South Beach Wine & Food Festival is a-happening and the remaining eight contestants are told they have to cook for "VIP" festival attendees and their rugrats. Each of them needs to make a summery dish for grown-ups, and a toned-down kiddie version of the same dish.

To all of you parents out there with "picky" eaters, this does NOT mean to substitute chicken fingers and french fries for any or all of the food that Mommy and Daddy (or Mommy and Mommy, Daddy and Daddy, Mommy and "Uncle" Jose, Daddy and that trashy whore he left you for, etc.) are eating.

In addition to the cookery, the Wannabes need to do a 30 second on-camera presentation involving a nifty culinary/party/entertaining/outdoors/somekinda tip, which will be shown to the judges. And the special super-duper guest judge this week is...Paula Deen, who's brought along one of her lame-o sons. Martie just about jumps out of her skin at Paula's "Hay, yowl!" greeting and the sight of her blindingly white dentures. Another Southern gal in da house! 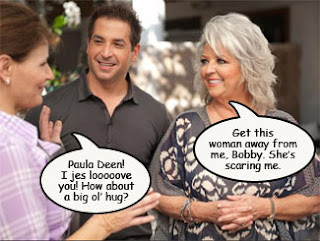 The winner of this challenge will not only not be eliminated this week, but will also win a $20,000 gift card to Target. Wow - that can buy a lot of fellow Scripps employee Sabrina Soto's tchotchkes! So to make sure we're fully immersed in Target advertising this week, one person from each team goes to Target to buy plastic crap to use as decor. And man, are they excited! How can one not be excited when both Target AND Paula Deen are involved?! Except maybe the more appropriate Paula Deen/Wal-Mart combo. 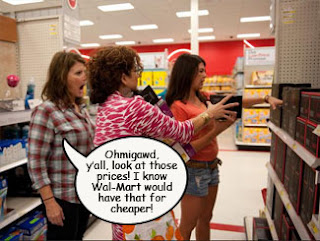 Justin has made a chilled corn soup that he spices up with chipotle oil for the judges. Both Paula Deen and Susie Fogelson take a big hit of oil and start choking from the heat. They work for the Food Network, with Bobby Flay - who uses chile and green onion oils on EVERYTHING - and they don't know that that puddle of oily red stuff on their soup is going to be hot? Seriously - how dumb are these people?

Martie has cooked up some goat's cheese-and-smoked salmon-stuffed endives and is praying that Paula Deen likes them when Paula throws an ice-cold bucket of rude in her face. "I don't like goat's cheese, yowl," she drawls. Martie poops herself a little in disappointment, and then backs away in embarrassment after her video presentation reveals that she's once again blabbed too much and has run out of time.

Meanwhile, Malcolm has completely convinced himself that his personality alone can win him this competition. "I don't need no stinking POV!" he cries, and presents his dish while babbling something about soul food, or being soulful, or having a soul, or something like that. Tushface and Susie question him about his POV, because after seven weeks, they're just realizing he doesn't seem to have one.

Nikki, despite not having time to cut up her lamb skewers for the kiddie plate, and not really impressing anyone with the flavor of her food, did a nice job with her presentation, seeming much warmer and likable than in past weeks. To the judges, that is. I still don't like her.

Michele is also a problem child this week, but it's not 100% her fault. Her original idea was to make crab salad, and Bobby reminds her that there are stone crabs to be found in South Beach and she should think of using them. She may well have bought a different kind of crab meat had Bobby not gone all locavore on her. Instead, she bought all the stone crab claws she could find and spent nearly all of her cooking time cracking those hard bastards and attempting to get the meat out without a lot of shell. Alas, the crab salad was full of shells and Susie said she was afraid to eat more than the first bite. As for her presentation, somehow Michele managed to get her spiel done with five seconds to spare. Seconds that Martie could have used. 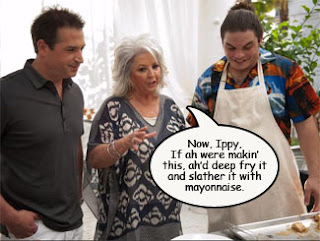 Yvan and Martita are so bland and boring, I can't remember what they presented. Yawn. Ippy, the final member of Team Giada, was more in his element in the heat of Miami, so both his food and presentation made everyone happy. Some diners in the crowd declared his fish skewers the best food of the day. And the judges were so pleased, they awarded him the 20K Target gift card.

Rather than pick one loser from each team, two folks from Team Bobby were made to battle in the Producer's Challenge. Because of course it was Team Bobby's turn to lose a member. (Next week, it'll be Giada's team, just you wait.) Michele and Malcolm were the least impressive, so they were asked to create a specialty cocktail and then present the drink live to the judges in an al fresco version of the Chamber of the Glowing Vagina, disappointingly without the Glowing Vagina.

Michele mixes up something she calls a "Matatuck Mystery Cocktail," full of citrus, rum, and cranberries. The judges love it and think it suits her New England-based POV. Because of course citrus and rum are native to New England. 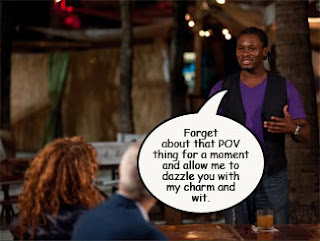 Malcolm thinks outside the box and cooks up some apple cobbler, which he tosses in the blender with some booze. He tries to present it as a soul food thing, but doesn't everyone eat apple cobbler? Tushface and Susie like the drink, but they are still having trouble with Malcolm's lack of view, so they give him a one-way ticket back to the DC area.

Not surprising, really. Next week it will be Yvan, Martita, or Ippy. I like Ippy, but I think any one of the three could be on the line. Giada's team is really the least interesting, IMHO.