Mr Minx and I had a Travelzoo voucher for Ciao Bella that was supposed to get us $86 worth of food for $39. Not as good a deal as the one for Milan (which supposedly offered $130 worth of food), it was ok because discounted food is always a good thing. Most of the time.

We'd never been to Ciao Bella before and didn't know what to expect. Overall, however, we were pleased that the decor was tasteful (apart from obviously-fake plants in the windows) and the food was hearty and quite good. What we didn't like was that we were seated at an awkward round two-top smack next to a chatty hen party at a 4-top. The rest of the restaurant was completely empty, so it doesn't seem unreasonable that we could have been seated at a larger table on the other side of the room. I suppose we should have asked to be seated elsewhere, but for some reason, I always feel the need to suffer with what we get. 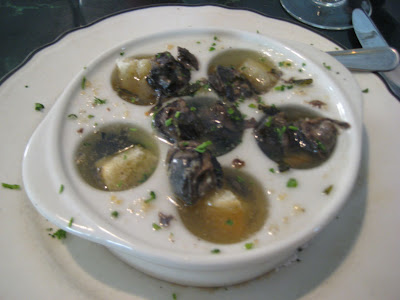 I had the escargot in basil garlic butter. The snails themselves were tasty, but there was a bit too much butter. I liked the toasted croutons in each well, but think a larger untoasted bit might have absorbed the juices better. It could have used a pinch of salt as well. 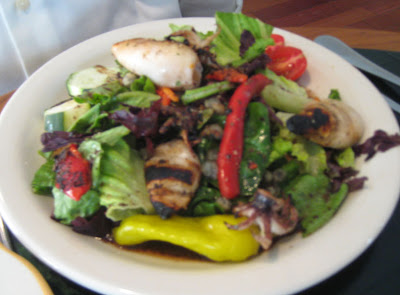 Mr Minx had the grilled calamari salad, which was chock full of roasted peppers, pepperoncini, and cucumbers. The calamari was a bit charred in spots, but the slightly sweet balsamic vinaigrette brought all of the flavors together nicely. 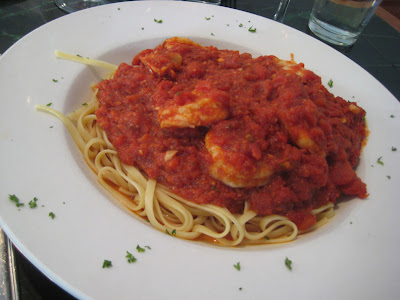 For my entree, I ordered the shrimp with linguini fra diavolo, hoping it was as delicious but not quite as spicy as the sauce at Pasta Blitz (which is evilly hot). The chunky and rustic sauce had a nice kick of red pepper, but thankfully was not too incendiary to eat. The shrimp were nicely cooked, but it was a bit awkward to remove their tails. 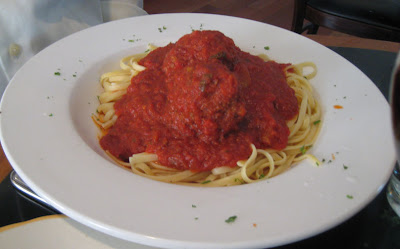 Mr Minx's linguini and meatballs was very good. I'm a fan of soft and cheesy meatballs, and these delivered on both counts. They reminded me of my Aunt Stasia's meatballs, which of course I didn't appreciate when I had access to them.
For dessert, we shared a completely forgettable tiramisu that was mostly sweetened whipped cream and some commercial-tasting cake. Sorry, but I think I will forever be comparing all tiramisu to the one we had at Aldo's, which was the real deal.
By my calculations, our dinner came to well below $86, but somehow when the check came, we owed $20.27. I had been prepared to leave a twenty for the tip, but our waiter had conveniently added the gratuity to the bill in such a manner that the Travelzoo voucher would take care of it. And then the bozo noted that the voucher was worth $69, rather than $86, effectively screwing himself out of a twenty dollar tip and awarding the money to his employer.
He was involved with a rather large and boisterous family party that were having issues with ordering appetizers, and I didn't want to wait and argue with him, so we left. The meal only cost me .27 more than I had intended to pay, after all. And it was good.
Still...plenty of other Little Italy restaurants in which to dine next time.
Posted on Minxeats.com.
Posted by theminx