For months now, I'd been eagerly following the progress reports on Of Love & Regret. This joint effort between Jack's Bistro owner Ted Stelzenmuller and Stillwater Ales' Brian Strumke offers Ted's customarily eclectic chow and oodles of artisan brews with which to wash it down. Because the focus is on the food and drink, the decor is really low-key: exposed brick, long wooden bar, a handful of tables. The space isn't particularly large, and when we arrived at 5pm, there were already quite a few people in it. I hope this popularity continues.

When my Dad and I visited, we were there to try a few beers and a handful of appetizers, but it was really hard to limit ourselves. Luckily, the beers come in half pours, so we were able to taste three without getting blotto. The Stillwater Cellar Door, a white sage infused wheat, is billed as the "quintessential food beer," and it's hard to argue with that. Light and refreshing, and rather floral, it was very easy to drink. Also on the floral side was a sample of Bear Republic Racer 5 IPA, which was pleasantly (but not excessively) hoppy. Finally, the Brewer's Art/Stillwater joint called "Debutante" was surprisingly dry, considering that it was flavored with hyssop, honeysuckle, and heather.

As for the food - it all worked.

I just had to try the crispy pig's ears, because pig ears were on my foodie bucket list. Cut into matchsticks, the fried ears were indeed crisp, reminding me somewhat of a thick-cut pig-flavored potato chip. They came with a poached egg, grilled peppers and onions, and jalapeno, and I gotta say it was a bit difficult to eat. The pig was too crisp to stab with a fork, so I basically used the egg as a dip as I ate the ear with my fingers, then scooped up the rest with a fork when the pig was gone. 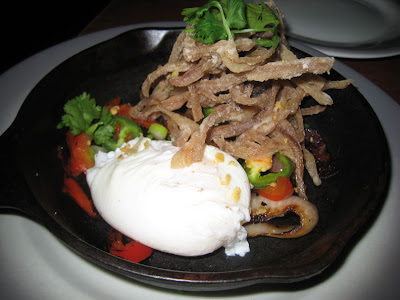 We also tried the Korean pancake, which was topped with a generous dollop of shredded pork that reminded me of traditional Southern BBQ pulled pork, and a drizzle of sweet soy. The flavors weren't quite Korean, but they were delicious. Dad ate 99% of this dish and proclaimed it "happy food." 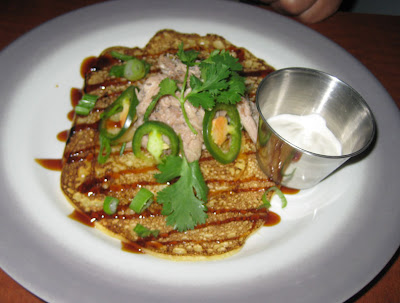 My favorite of the three dishes we tried was the rock shrimp corn fritters. Three fat, nicely crisp fritters studded with nuggets of shrimp reminded me of hush puppies, and were made even tastier with a dip in the accompanying key lime mustard. Called mustard on the menu, I felt it was more mayonnaise-y, and rather eggy in flavor. I enjoyed it quite a bit. 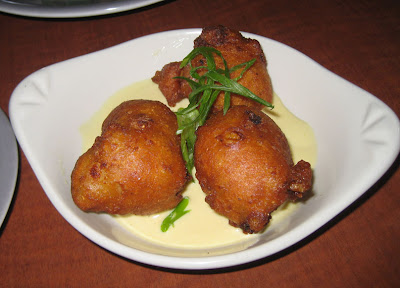 As a special bonus to our meal, we were waited on by none other than Jesse Sandlin, former chef at Vino Rosina, and Top Chef season 6 competitor. We'd been Facebook friends for quite a while now, and it was nice to finally meet her. She's taking a break from the kitchen to work on her own projects, and I can't wait to see what she'll be doing next.

Speaking of next, another trip to Of Love and Regret - for more beers and a burger - is definitely on the agenda.