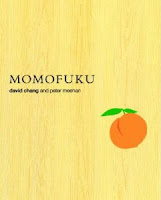 I received the Momofuku cookbook as a Christmas gift and immediately read it from cover to cover - it was one of those cases when the narrative is more interesting than the recipes. Not that the recipes weren't interesting, exactly, it's just that most of them are a bit much for the home cook. Author David Chang has been a food-world darling ever since he opened Momofuku Noodle Bar, and while I had used Chang's recipe for short ribs a few times in the past, and I've made his version of brussels sprouts, I had never eaten at any of his restaurants. That changed on my most recent visit to Manhattan.

Upon dumping my luggage off at my hotel near Grand Central Station, I hopped the 6 train and headed to the East Village to visit Momofuku Ssam Bar. It was early lunchtime and I was able to score a seat at the bar. After asking my server for suggestions, I got my pork on. (Kevin Gillespie, eat your heart out.)

First I had the famous pork buns - pillowy soft steamed buns stuffed with slices of pork belly, cucumber slices, and hoisin sauce. A mini bottle of sriracha was provided to add heat. 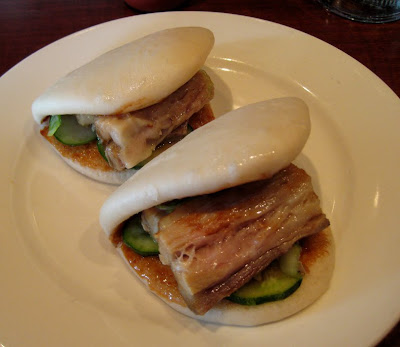 The pork belly was so tender and unctuous, it dribbled clear fat onto my hands and the plate. Um nom nom! I could have eaten ten of these babies. As far as I am concerned, they lived up to the hype. Here's a recipe, if you're curious enough to make them yourself. 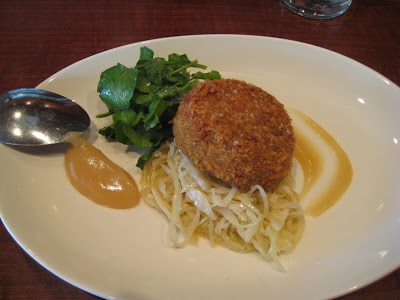 For my second course, I went for the "crispy pig's head" accompanied by pear mostarda, a lightly cured sauerkraut, and a tiny pile of watercress in a tart dressing.. The patty was comprised of various meat bits from a pig's head, rolled in panko, and fried. It was tender and juicy and not at all like "head cheese" which is what the waiter called it. The pear mostarda was incredibly tasty - very much pear, very much mustard. And a lightly cured sauerkraut is much better than the stuff from a can. Much. And I grew up eating the stuff. 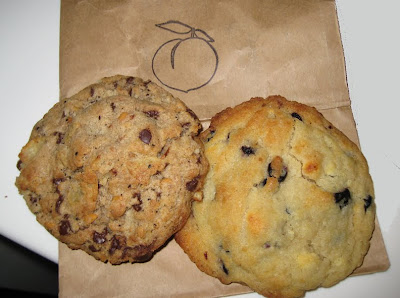 After lunch I went next door to Milk Bar and picked up a compost cookie and a blueberry cream cookie. They were far too sweet for my tastes (and I like sweet). The compost cookie had a weird gritty texture (from crushed cereal). But...they made for a decent dessert that evening and breakfast the next morning. 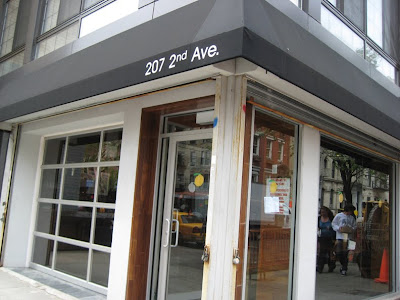 One Momofuku restaurant down, three to go.

I still dream about their brussel sprouts! It was an amazing dish!
http://lovefeasttable.com/blog/oh-my-momofuku/
~kristin

Thanks for the reminder, Kristin - I made those in the past before, too!
http://www.minxeats.com/2007/11/brussels-sprouts.html

I must investigate these brussel sprouts. And oddly enough, I just threw up my experience trying to make those Compost Cookies up on the Amateur Gourmet's Community this morning.

My attempt wasn't so great. But I'm going to be in NYC this summer so I may just need to go see what all the fuss is about...any maybe chow down on some pork buns.