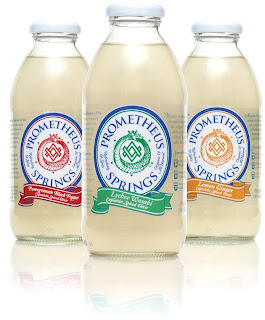 In NY last Sunday, I sampled a product called Prometheus Springs Capsaicin Spiced Elixir. I first tried the pomegranate and black pepper flavor, which had an unusual warmth, partly from the pepper, and partly from the capsaicin - the chemicals that give chiles their heat. Capsaicin is believed to elevate mood by releasing endorphins. Why anyone would think to put it in a beverage is beyond me, but hey, it works. I felt pretty snazzy for a few hours afterwards, despite getting lost in the East Village, wandering far from my intended destination.

In addition to the pomegranate, I also tried the lychee wasabi, which had a brighter flavor and more heat (and a somewhat rank smell), and the lemon ginger. The pomegranate was my favorite of the three. As I was drinking, I thought these beverages would make for fine cocktail mixers, then I realized that most people there were drinking it with prosecco, while I had all three flavors straight up. The company thinks their product would work well with alcohol, too, as there are several drink recipes on their Web site.

Prometheus Springs Elixirs are currently only available at The Natural, 2150 York Road in Timonium, but should be in Whole Foods shortly. If you can find a bottle, do give it a try, as it's very unusual and quite delicious. Just don't attempt to chug-a-lug it, Snapple-style, because you might hurt yourself in the process. :)
Posted by theminx