While there was still a chill in the air, I thought it would be a good idea to get rid of some of the more cold-weather foodstuffs in our freezer. We had a large package of short ribs and I thought they'd make a fine Sunday supper. Rather than use a recipe I've tried in the past, I found a new one using a coffee marinade that sounded intriguing. 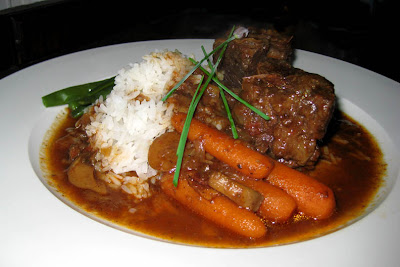 Seemed wasteful to use 1/4 cup of expensive maple syrup in the marinade, so I used only about a tablespoon. I didn't think it could be tasted over the coffee anyway. Surprisingly, the coffee was not the predominate flavor, despite being in both the marinade and the cooking liquid. Two-and-one-third tablespoons of Worcestershire sauce packs a wallop that could be tasted in the final product, drowning out pretty much everything else - even the bacon.

Ah, yes, bacon - the recipe calls for searing the beef ribs in bacon grease rendered from 1/4 cup of chopped bacon, then adding the pork back to the pot later. I can tell you that the bacon flavor was non-existent, so should you ever try this recipe and don't have bacon on hand, don't worry about it. (And I'm sure the bacon added to the nearly 2 cups of liquid fat I skimmed off the meat as it cooked.) As for the coffee, it may as well have been beef stock for all of the flavor it brought to the party (none). I also lowered the salt content of the marinade dramatically and found that I needed to add very little salt at the end of cooking, so 1/2 cup would definitely have made the dish too salty.

That's not to say the dish wasn't good - it was very good, but I don't think a wet marinade brought much to the table. I think a rub, wet or dry, may have added more flavor to the meat, and adding more coffee to the cooking liquid may make its flavor more pronounced. Otherwise, I'm thinking that cooking seared, non-marinated meat in a bath of beef stock, ketchup, mustard, and a ton of Worcestershire would produce much the same results.

I'll get back to you if I try it.
Posted by theminx